A string quartet found themselves caught in a traffic jam, then decided to do something about it... 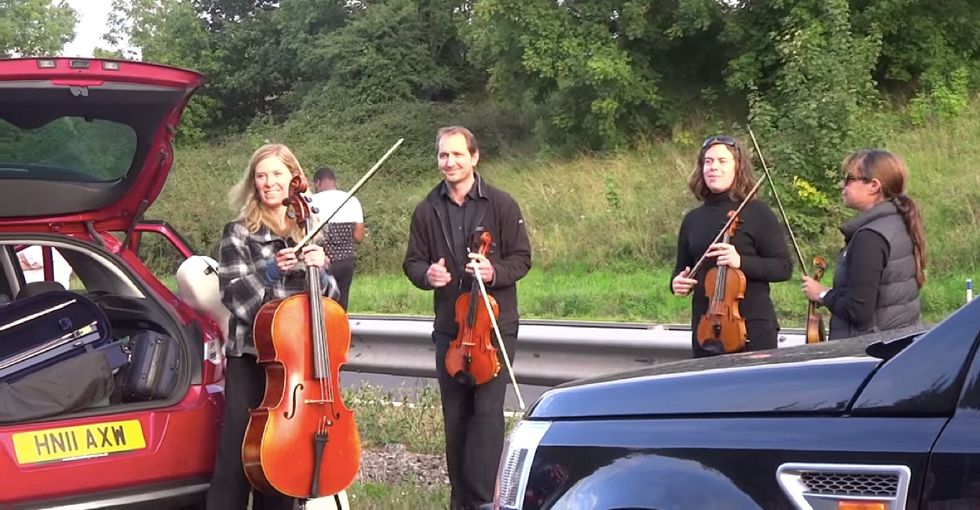 There are few experiences on this planet more mind-numbingly frustrating, more head-poundingly excruciating than being stuck in traffic.

The boredom, the lack of a bathroom, the GIANT SNAILS. It's a thoroughly discouraging scenario that just makes you want to…

GIF via "The Office"

It's also a situation that hundreds of drivers on England's M5 — a 162-mile motorway in the southwest part of the country — were forced to deal with on the afternoon of Saturday, Sept. 12, 2015, when a vehicle carrying a half-dozen horses broke down just outside of the small town of Taunton. In the melee, one of the vehicle's equine occupants even managed to escape, leading to a complete standstill on one of the country's biggest highways.

Fortunately for a few dozen weary travelers, one of the cars stuck beside them just so happened to be carrying a professionally trained string quartet.

Image via Daily Picks and Flicks/YouTube.

The quartet members, on their way back from a wedding and with little else to do besides twiddle their fingers, decided to liven up the tedious affair by playing a classic tune from their repertoire: Johann Pachelbel's "Canon and Gigue for three violins and basso continuo" (or Pachelbel's "Canon" for short).

Image via Daily Picks and Flicks/YouTube.

The motorists nearby surrounded the quartet, whipping out their phones to record the impromptu performance as their anger gave way to euphoria. Helen Delingpole, a motorist from Wales, managed to capture the entire thing on her camera, which she later posted to Facebook.

"This is the best part of the holiday!" cheered one excited spectator.

When the quartet finished, they were met with a raucous applause that had violinist Lu Jeffery at a loss for words. "We have played some of the most incredible concert venues globally, and then one afternoon you play the M5, it all goes crazy," he said in a follow-up interview with The Telegraph.

It just goes to show the profound, mood-altering power that music can have in even the most turbulent of times, especially when combined with a random act of kindness.

My only issue with the performance is that not one audience member had the common sense to request "Free Bird" next.