Nobody came to his 'Stranger Things' birthday party. The show's cast found out. 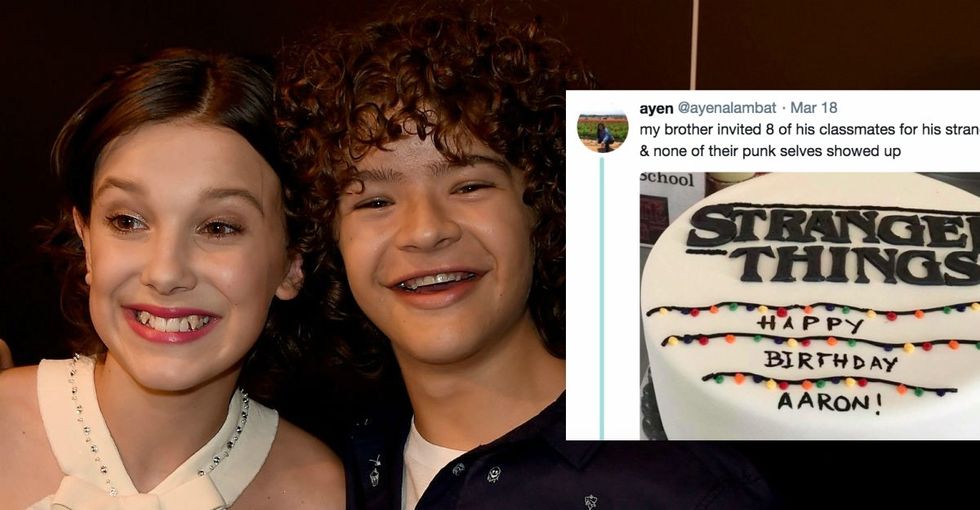 There was a cake made in honor of the Netflix series, Demogorgon blood (punch) to drink, and — of course — holiday lights strung up to communicate with those stuck in the Upside Down. (If none of that made sense to you, you really need to watch the show.)

The only thing the party could have used were more of Aaron's friends.

Aaron's sister, Ayen, pointed out in a disheartening tweet that, even though Aaron invited eight of his classmates, "none of their punk selves showed up."

The good news is that other Twitter users wanted to make sure Aaron still had a great birthday party. So they started replying to the tweet.

A radio DJ wanted to give him a shoutout on air.

Someone else said that his whole supportive "Twitter fam" will show up for a good time next year.

One encouraging user opened up about a similar experience they had as a kid, writing, "In 5th grade I made invitations to a laser tag party and none of my friends showed up. ... This past weekend I had a surprise birthday and it was laser tag."

Internet star Bretman Rock chimed in, too, noting how delicious all the Filipino food looked in the pics.

It didn't take long before the tweet made its way to the feeds of a few "Stranger Things" cast members.

Actress Millie Bobby Brown, who plays Eleven on the show, said she wants to come to Aaron's birthday party next year. "You can let them all know that everyone on behalf [of] 'Stranger Things' would’ve come! I think [you're] awesome and next year I would like an invite ... Please?"

Actor Gaten Matarazzo, who plays Dustin, replied to Brown's tweet: "Count me in too! I'll bring the chocolate pudding."

All the positive vibes and well-wishes seemed to turn Aaron's birthday into an experience he'll never forget — in a good way!

In a tweet posted the following day, Ayen updated all those wondering how her brother was doing in the aftermath of her viral tweet.

Sharing tough life experiences with complete strangers can actually bring out the best in humanity sometimes, it seems. And who knows? A few celebrities may even chime in to show their love and support for you, too.