A doctor did surgery on a boy's stuffed animal. The response from other parents was sweet. 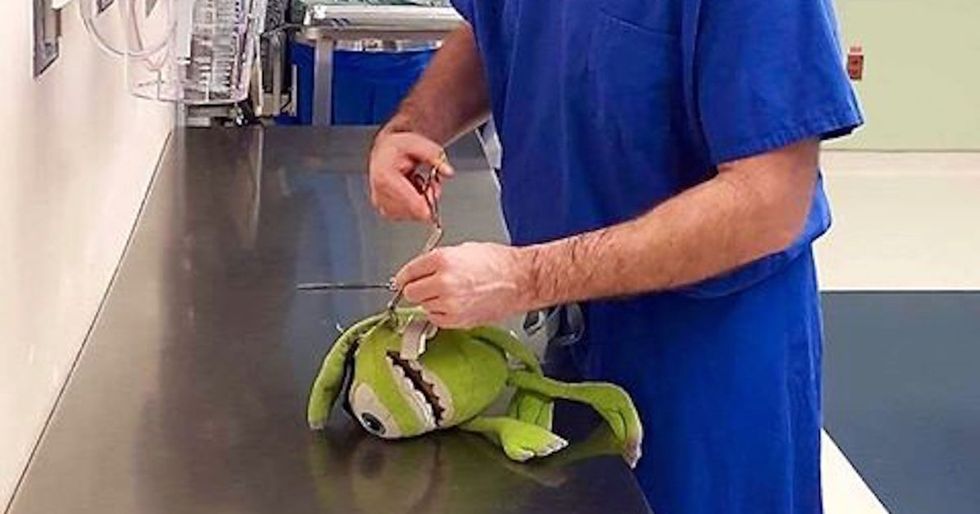 When 9-year-old Ryan Jasen needed surgery, he wanted his best friend by his side: a stuffed Mike Wazowski of "Monsters, Inc." fame.

But while Ryan was under the knife, his surgeon, Dr. Travis Groth of the Children's Hospital of Wisconsin, noticed Mike the monster wasn't exactly in tip-top shape either. He had a noticeable tear in his side from years of following Ryan everywhere.

So once Ryan's surgery was done, Mike went under Groth's knife to get a few stitches.

Check out this picture from our operating room. After performing surgery on a young boy, Dr. Groth made the extra effort...

Posted by Children's Hospital of Wisconsin on Wednesday, December 28, 2016

Both Ryan and his stuffed animal best friend came out of the operating room as good as new.

The photo went viral after the hospital posted it to its Facebook page. Once the comments started rolling in, it became clear Groth's sweet gesture is, amazingly, a relatively common occurrence.

In fact, doctors and surgeons all over the country are learning that stuffed animal surgeries just might be the key to keeping kids calm and comfortable in the hospital.

It may be a small gesture, but it means a lot to the kids and their parents.

"When [Ryan] woke up, he saw his best buddy also kind of patched up and had bandages around him so he felt like he was on the same page with him," Tony Jasen, Ryan's father, told WTMJ Milwaukee.

When Holly Decker Lamb's young daughter went in for a cochlear implant, her buddy, Mr. Cat, got one too.

"When Cora came out of surgery she was happy to see that her Cat had the same bandage as she did," Lamb wrote in a Facebook message. "We then used it to tell her that she couldn’t take her bandage’s off until Mr. Cat got his off."

Dawn Marie Spencer's son was afraid of his oxygen mask. Patrick from "Spongebob Squarepants" gave him the bravery he needed.

"We can never thank the staff at Children's enough for how lovingly they took care of our son and how special they made him feel."

A stuffed Patrick demonstrates how to wear an oxygen mask. Photo by Dawn Marie Spencer, used with permission.

When Tami Doyle's daughter had brain surgery, so did her Cookie Monster.

Yara Soler's daughter had surgery for her tonsils, and her purple cat joined her in recovery.

A purple cat recovers with her girl after a long procedure. Photo by Yara Soler, used with permission.

And Gina Cummings' young son braved brain surgery with Rufus the rabbit by his side.

Rufus was a brave companion during surgery. Photo by Gina Cummings, used with permission.

Hospitals and doctors offices can be frightening for many kids. Every little bit of extra comfort helps.

Whether it's fun hospital gowns or a sweet video game to make being bedridden a little more tolerable, anything that makes a hospital room more welcoming can have a powerful effect on young kids.

The doctors, nurses, and other health care workers who tend to children in their greatest time of need are already heroes, but when they go the extra mile by simply, say, wrapping some gauze around a teddy bear's head, the results are incredibly heartwarming.