On more than one occasion, his influence was real. 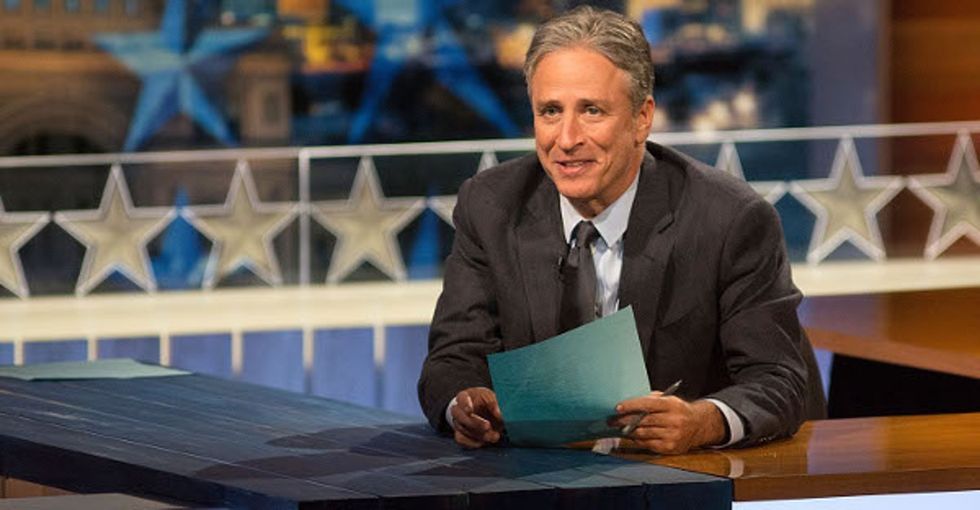 For 16 years, Jon Stewart maintained that his only job is making people laugh. As for real-world influence? Well. As far as he's concerned, we're likely just imagining it.

For the most part, he's been right. Despite producing some of the most hilariously incisive television ever committed to air, "The Daily Show" is just a comedy show at the end of the day. And Jon Stewart was just the comedian who hosts it.

Mostly. But not always.

So here are six times something he said or did on TV actually made an impact in the world.

'Cause he's right. Mostly, he didn't change stuff. But the few times he actually did? Those moments were pretty great.

1. That time he got a terrible TV show cancelled

But sometimes hyperbolic clichés are clichés for a reason.

If you weren't alive or paying attention in 2004, it's hard to express just how bad "Crossfire" was. But, oh, was it bad.

In the second year of a war fought under ever-thinner pretenses, in the midst of perhaps the most important election of the 21st Century, the signature show on America's "Most Trusted Name in News" was entirely devoted to pundits screaming at each other about which candidate looked lamer windsurfing.

And then, on October 15 of that year, just a few weeks before the election, Stewart appeared on "Crossfire." He was ostensibly there to promote his book, but instead, he spent nearly 15 minutes berating hosts Paul Begala and Tucker Carlson for cheapening the public discourse, letting themselves be rolled by politicians, and generally "hurting America."

"Crossfire" never recovered. Two-and-a-half months later, it was off the air. And then-CNN president Jonathan Klein straight-up told The New York Times that Jon Stewart's critique was a big reason why. The network subsequently tried to reboot the show with new hosts in 2013. Predictably, it failed miserably.

And America breathed a sigh of relief.

2. That time he got the U.S. government to pay health care costs for 9/11 first responders

9/11 marked a turning point for "The Daily Show" and Stewart, who, like many Americans, was visibly, personally shaken by the events of that day. It marked the show's sudden shift away from goofball comedy into a venue for the funniest, sharpest political commentary on TV.

As a result, in 2010, when Congress floated a bill to provide health care to 9/11 first responders, Stewart was plenty interested.

Like many others, he figured passing the bill would be a no-brainer.

Republicans refused to support the bill because paying for the program required increasing taxes on foreign corporations, and then, when their hand was forced, they tried to amend it to exclude undocumented immigrants.

Democrats refused to bring the bill to a traditional up-or-down vote, for fear that voting down the Republicans' undocumented immigrant amendment would make them look soft on immigration.

It was a stunning display of political cravenness. And a Stewart let them have it.

Somehow, some way, his rant flipped a light on somewhere in Congress. About a month later, the bill passed the House.

Then, when it looked like it was on track to be filibustered in the Senate, Stewart devoted his entire last show of the year to the bill. He even convened a panel of 9/11 first responders who, predictably, savaged Congress for its inaction.

The bill passed the Senate just a few days later.

Ultimately, you could produce a long list of advocates, political leaders, and others who were responsible in some part for the bill's success.

But according to many of its most fervent supporters, Stewart's unyielding support was the real game changer.

3. That time he ridiculed Democrats for "taking advice from the opposing team's coaching staff"

After Massachusetts Republican Scott Brown was elected to Senator Ted Kennedy's old seat in a 2010 special election, the Democrats lost their supermajority in the Senate. They were in the middle of the initial debates around Obamacare, and without the supermajority, the Democrats feared the Republicans would filibuster the health care bill.

The Democrats were in — to use a bit of obscure political terminology — full-on freak-out mode. And, right on cue, their helpful Republican pals came out in full force to tell them how they could do better in the next election.

Specifically, "move to the center" and forget about their silly little health care plan, as well as a few of their other priorities.

While Democrats rushed to show how grateful they were for the advice by announcing their intent to water down their agenda, and possibly even give up on Obamacare, Stewart used the opportunity to politely point out that maybe — just maybe — the Republicans didn't exactly have the Democrats' best interests at heart.

Sort of, at least. What he actually said was: "Don't you get what the Republicans are doing? They're f**king with you."

Like many past "Daily Show" segments, Stewart's comments seemed to fly under the radar. But according to a report in Politico, the White House was actually paying attention and felt appropriately shamed:

"[Obama advisor Austan] Goolsbee said he would often wince at Stewart's assaults on the Obama White House and Capitol Hill Democrats. He recalled one particularly tough January 2010 episode in which Stewart used a clip from the 1980s TV show 'The Wonder Years' to question why Democrats ever expected Republicans to negotiate in good faith on issues from climate change to taxes to financial reform. 'You're just cringing,' Goolsbee said. 'Oh God. I think the main thing that you're hoping is, you're hoping in your heart of hearts he's not right.'"

At the end of the day, they took Stewart's advice. Congressional Democrats stood firm and Obamacare passed.

And judging by the mounting quantity of IDGAF moments in Obama's second term, it seems like they're continuing to follow his advice.

It appears to be working out pretty well for them, too.

4. That time he made it much easier for veterans who live in rural areas to see a doctor

By late 2014, wait times at VA hospitals had become unbearable for many veterans. In order to help rectify this, Congress instituted the Veteran's Choice program, which allowed veterans to see doctors at non-VA hospitals. The catch? In order to be eligible, veterans either had to demonstrate that they had waited at least 30 days for care or live at least 40 miles "as the crow flies," away from the nearest VA facility, rather than 40 miles actual driving distance.

As a result, many veterans who should have been covered by the program weren't. And the most infuriating part? It was specifically designed that way to save money. Or, as Stewart put it, "dicking over veterans isn't a bug of the program, it's a feature of the program."

The very next day after "The Daily Show" segment aired, the VA adjusted the rule from imaginary crow distance back to driving distance, doubling the number of veterans who could use Veteran's Choice.

As usual, Stewart was skeptical that his segment led to the change, but considering the hotness of the fire he spit, it's more than a little bit likely that it had an impact.

5. Those times he joked, sang, and danced to raise money for people with autism

In addition to his gig as chief riffer on quick-cut cable news montages on "The Daily Show," Stewart is also the frequent host of "Night of Too Many Stars," a fundraiser that benefits New York Collaborates for Autism. According to Comedy Central, since it began in 2006, the event has raised over $18 million for adults and children with autism.

Not only is the program good for the Earth, it's also entertaining as hell, thanks in no small part to Stewart's involvement.

Example: This near-perfect musical moment from 2010, featuring Stewart and two obscure comedians from the early days of "The Daily Show" wearing pilot hats and starting a new dance craze.

6. That time he got more than 200,000 people to stand outside for hours in Washington, D.C., and listen appreciatively to Kid Rock

"The Rally to Restore Sanity and/or Fear" was kind of a ludicrous idea, in retrospect. Gathering a massive group of people on the Washington Mall to unite behind the cause of civility and calming down? To parody something Glenn Beck did? Five years later, it's kind of hard to imagine how it all came together.

There have been criticisms of the rally, for sure: for being an exercise in narcissism, for missing the big picture, and for being tantamount to telling people not to care. And those criticisms are all valid — to some extent.

But in a certain sense, the rally was peak Jon Stewart. An absurd, hilarious, joyful, tearful spectacle devoted to us all getting along.

What could be wrong with that?

Especially for D.C.'s food truck operators, who undoubtedly raked it in all afternoon.