5 quotes from presidential farewell speeches show the power of a strong good-bye.

Ahead of President Obama's final speech, a look back at some important lessons. 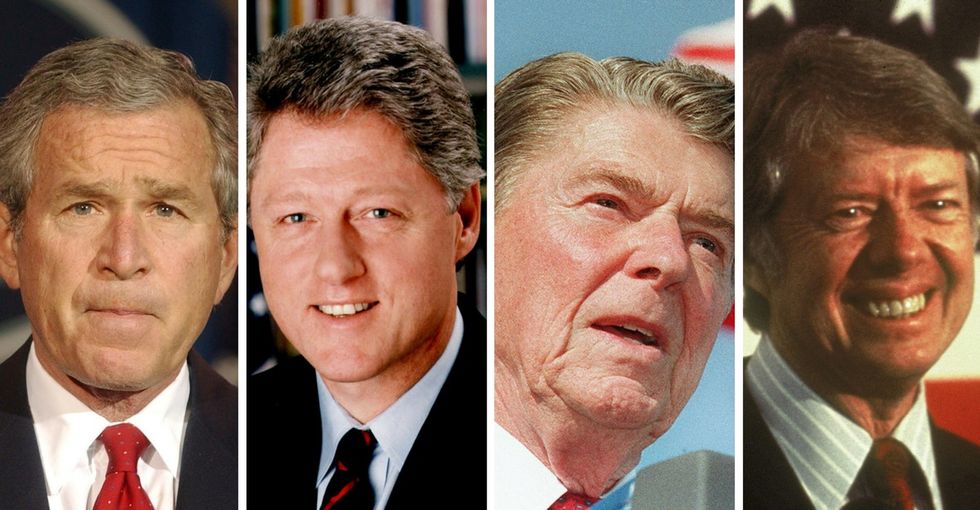 On Sunday, Jan. 10, President Barack Obama will travel to Chicago to deliver his farewell address to the nation.

The farewell address is a tradition dating all the way back to George Washington himself. The address has historically provided outgoing presidents with an opportunity to publicly reflect on their successes and failures, as well as to share a bit of unique wisdom with both their successor and with the general public as a whole.

"Since 2009, we've faced our fair share of challenges, and come through them stronger," wrote President Obama on the White House website. "That's because we have never let go of a belief that has guided us ever since our founding — our conviction that, together, we can change this country for the better."

One of the most interesting aspects of the farewell address is how, as a concept, it's such a contradiction in terms of the president's power and influence.

Usually delivered just days before a successor is set to take office, the farewell address comes at what is arguably the low point in any president's administration in terms of actual policy influence — and yet, these addresses have typically been imbued with such candidness that they become powerful in a whole new way.

1. George W. Bush shared a message of compassion and understanding for immigrants.

"In the face of threats from abroad, it can be tempting to seek comfort by turning inward. But we must reject isolationism and its companion, protectionism. Retreating behind our borders would only invite danger," Bush warned.

While much of President Bush's speech focused heavily on the importance of national defense and vigilance about preventing future terrorist attacks, at one point during the address, he focused on the very concept of what it means to be American:

2. Bill Clinton urged future generations to embrace equality "in our hearts and in our laws."

"As we become ever more diverse, we must work harder to unite around our common values and our common humanity," implored Clinton in his speech.

During his administration, President Clinton's record on equality was somewhat mixed. As the president who signed both the Defense of Marriage Act (which preemptively blocked same-sex marriages) and the military's Don't Ask, Don't Tell policy (which prohibited gays, lesbians, and bisexuals from serving openly in the armed forces) into law, his farewell address hinted at a bit of regret when it came to social equity:

3. Ronald Reagan used his address to remind the country why city walls must have doors that are open to everyone.

"I've spoken of the shining city all my political life, but I don't know if I ever quite communicated what I saw when I said it," Reagan said in his speech. "In my mind it was a tall, proud city built on rocks stronger than oceans, windswept, God-blessed, and teeming with people of all kinds living in harmony and peace; a city with free ports that hummed with commerce and creativity."

"And if there had to be city walls," he said, "the walls had doors and the doors were open to anyone with the will and the heart to get here. That's how I saw it, and see it still."

Reagan's address mostly centered on his successes in office, focusing on economic gains and the U.S.'s role in ending the Cold War, but also included a word of advice for when the going gets tough or problems seem overwhelming

4. Jimmy Carter played up the importance of defending the human rights of all people in the success of America.

"Those who hunger for freedom, who thirst for human dignity, and who suffer for the sake of justice, they are the patriots of this cause," said Carter during his address.

His anti-isolationist message touched on the U.S.'s role in ensuring that people around the world are treated with dignity, respect, and basic human rights. Carter urged Americans to be a force for good in the world, extending far beyond geographic borders.

5. George Washington warned us of the dangers of partisanship, a message that remains incredibly relevant.

"I have already intimated to you the danger of parties in the State, with particular reference to the founding of them on geographical discriminations," wrote Washington. "Let me now take a more comprehensive view, and warn you in the most solemn manner against the baneful effects of the spirit of party generally."

Despite having been delivered more than 220 years ago, Washington's address is perhaps the most prescient for 2017 and beyond. Political parties can serve as coalitions for individuals with similar goals. As President Washington warned, however, they can also lead to despotism. Now, in 2017, as the country's 45th president is about to be inaugurated, it seems our attachment to these political parties has done just that: empowered a despot.

Party allegiances today have even chipped away at the very concept of facts. Should a Democrat say the sky is blue, expect that a Republican will be there to dispute the assertion, and vice versa. It often feels as though the parties are no longer working toward common interests and solutions, but rather, a very dangerous game of one-upmanship, the most obvious example being the rush for Congress and the PEOTUS to repeal President Obama's landmark health care bill, which could boot up to 30 million people off their health insurance.

President Washington warned us. It's not too late to listen to what he — and our other past presidents — had to say.