3 moments that might convince you Edgar Allan Poe was a time traveler.

In the case of Poe, it was his fiction that was, well, stranger than fiction. 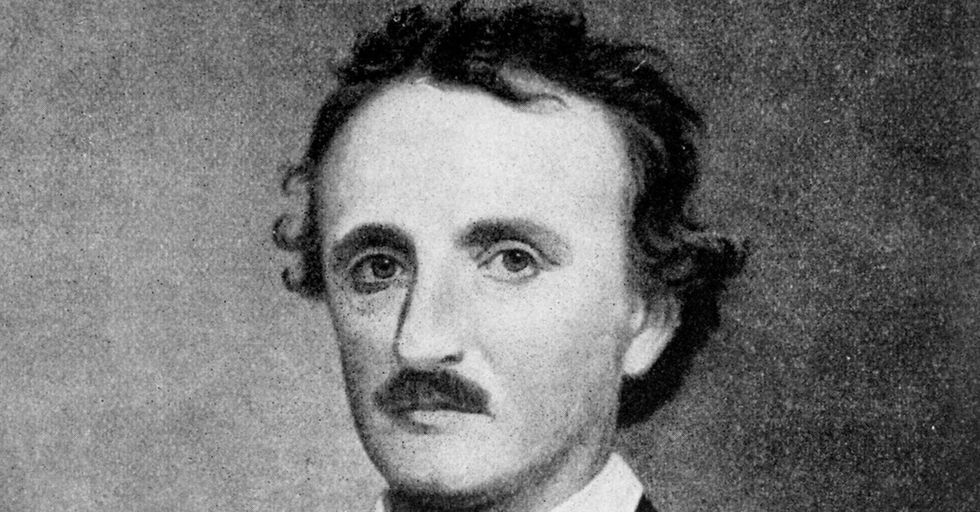 This story was originally published on HistoryBuff and first appeared on 8.16.16

I'm pretty positive that Edgar Allan Poe had (has?) the power to travel through time. Hear me out on this one.

It's not just the well-known circumstances of his life — orphaned at a young age, father of the mystery novel, master of cryptology, maestro of the macabre. Nor am I referring to the head-scratching details of the days leading up to his death: how he was found on the street near a voting poll wearing someone else's clothes, and during his subsequent hospitalization, he was alleged to babble incoherently about an unidentified person named “Reynolds."

And I won't even get into the confounding reports of a nameless figure who, for seven decades, would show up to Poe's gravesite in the early hours of his birthday with a glass of cognac and three roses.

Tragic and curious, yes, but hardly evidence that the acclaimed horror writer could transcend the limits of space and time. No, my time travel theory concerns the author's creative output, which you'll soon see is so flukishly prophetic as to make my outlandish claim seem plausible — nay, probable!

The proof is in the pudding, and the pudding is a loosely linked map of flesh-eating floaters, crunched skull survivors, and primordial particles. OK, here we go…

Exhibit A: "The Narrative of Arthur Gordon Pym of Nantucket"

Published in 1838, Poe's only completed novel details a mutiny on a whaling ship lost at sea. Out of supplies, the men revert to cannibalism, drawing straws to elect a sacrifice. A boy named Richard Parker draws the shortest straw and is subsequently eaten.

Now here's where it gets weird(er): In 1884, 46 years after the novel's publication, four men would be set adrift following the sinking of their yacht. Shipwrecked and without food, they too would go the survival cannibalism route, electing to kill and eat a 17-year-old cabin boy. The boy's name: Richard Parker.

The extraordinary parallel went unnoticed for nearly a century, until a widely-circulated letter from a descendant of the real Parker outlined the similarities between the novel's scene and the actual event. The letter was selected for publication in The Sunday Times after journalist Arthur Koestler put out a call for tales of “striking coincidence." Striking indeed.

Exhibit B: "The Businessman"

In 1848, a railroad worker named Phineas Gage suffered a traumatic brain injury after taking an iron spike through the skull. Somehow he survived, though his personality would change drastically. These behavioral changes were closely studied, allowing the medical community to develop the first understanding of the role played by the frontal lobe on social cognition.

Except for Poe, who'd inexplicably understood the profound personality changes caused by frontal lobe syndrome nearly a decade earlier. In 1840, he penned a characteristically gruesome story called “The Businessman" about an unnamed narrator who suffers a traumatic head injury as a young boy, leading to a life of obsessive regularity and violent, sociopathic outbursts.

Poe's grasp of frontal lobe syndrome is so precise that neurologist Eric Altshuler wrote, “There's a dozen symptoms and he knows every single one… There's everything in that story, we've hardly learned anything more." Altshuler, who, to reiterate, is a medically-licensed neurologist and not at all a crackpot, went on to say, “It's so exact that it's just weird, it's like he had a time machine."

Still unconvinced? What if I told you that Poe predicted the origins of the universe 80 years before modern science would begin to formulate the Big Bang theory? Surely, an amateur stargazer with no formal training in cosmology could not accurately describe the machinery of the universe, rejecting widely-held inaccuracies while solving a theoretical paradox that had bewildered astronomers since Kepler. Except that's exactly what happened.

The prophetic vision came in the form of "Eureka," a 150-page prose poem critically panned for its complexity and regarded by many as the work of a madman. Written in the final year of Poe's life, "Eureka" describes an expanding universe that began in “one instantaneous flash" derived from a single “primordial particle."

Poe goes on to put forth the first legitimate solution to Olbers' paradox — the question of why, given the vast number of stars in the universe, the night sky is dark — by explaining that light from the expanding universe had not yet reached our solar system. When Edward Robert Harrison published "Darkness at Night" in 1987, he credited "Eureka" as having anticipated his findings.

In an interview with Nautilus, Italian astronomer Alberto Cappi speaks of Poe's prescience, admitting, “It's surprising that Poe arrived at his dynamically evolving universe because there was no observational or theoretical evidence suggesting such a possibility. No astronomer in Poe's day could imagine a non-static universe."

But what if Poe wasn't of a day at all, but of all the days?

What if his written prophecies — on the cannibalistic demise of Richard Parker, the symptoms of frontal lobe syndrome, and the Big Bang theory — were merely reportage from his journey through the extratemporal continuum?

Surely I sound like a tinfoil-capped loon, but maybe, maybe, there are many more prophecies scattered throughout the author's work, a possibility made all the more likely by the fact that, as The New York Times notes, “Poe was so undervalued for so long, there is not a lot of Poe-related material around."

I'll leave you with this quote, taken from a letter that Poe wrote to James Russell Lowell in 1844, in which he apologizes for his absence and slothfulness:

"I live continually in a reverie of the future. I have no faith in human perfectibility. I think that human exertion will have no appreciable effect upon humanity. Man is now only more active — not more happy — nor more wise, than he was 6000 years ago. The result will never vary — and to suppose that it will, is to suppose that the foregone man has lived in vain — that the foregone time is but the rudiment of the future — that the myriads who have perished have not been upon equal footing with ourselves — nor are we with our posterity. I cannot agree to lose sight of man the individual, in man the mass… You speak of “an estimate of my life" — and, from what I have already said, you will see that I have none to give. I have been too deeply conscious of the mutability and evanescence of temporal things, to give any continuous effort to anything — to be consistent in anything. My life has been whim — impulse — passion — a longing for solitude — a scorn of all things present, in an earnest desire for the future."