2 Australian southern right whales decided to hang out with this paddleboarder, and it was amazing.

We already knew that whales were highly evolved creatures. But who would have thought they liked chillin' in the surf like the rest of humankind? 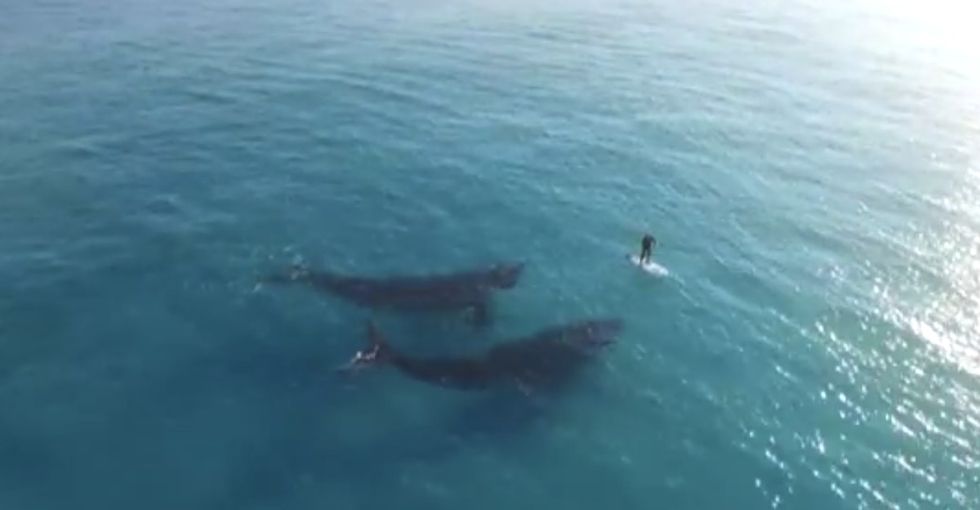 We don't often get to see ginormous southern right whales hanging out with humans.

This might have something to do with the fact that we hunted them nearly to extinction. Or it could just be because our homes can't comfortably accommodate a 50-foot-long, 60-ton aquatic houseguest. Either/or.

So it's easy to understand the excitement that filled local residents when they heard that a pair of these incredible leviathans were lounging right on the coast of Perth, Australia.

Presumably, the whales were interested in checking out the surfing scene at Esperance's Fourth Beach.

Whatever the reason for their casual beach trip, Jaimen Hudson headed down the footpath with his drone as soon he got word. He knew he had to capture the moment on camera.

What he didn't know was that Dave Price, owner of the local Esperance Sail & Surf, had already made his way out onto the water to greet the friendly critters.

Here's how Hudson described the moment to the local news:

"Dave Price who lives close by, was just making his way over to the whales on his stand-up paddle board and they were really inquisitive and came over to meet him."
...
"I don't think it was dangerous, the whales moved to where he was and the whole time they were very slow moving and peaceful."

Southern right whales are just one of the many majestic animals that make their home in Australia.

I haven't actually been there, but from what I hear, all of these awesome creatures peacefully integrate into everyday Australian life, existing happily side by side with our cousins down under.

And, you know, also happily asserting their boundaries.

And sure, dingoes are crazycool, but it's the marine life in the country that's perhaps the most remarkable — thanks in part to the Great Australian Bight.

The bight is the longest east-west ice-free coastline in the southern hemisphere, spanning over 700 miles from Western Australia to Tasmania.

In addition to the majestic views from its hundreds-feet-high cliffs, the pristine waters of the bight are home to an abundance of amazing and unique creatures. 85% of the species that live there aren't found anywhere else on the entire planet. The bight is home to the largest nursery for endangered southern right whales.

So you can understand what I mean when I say that it's a pretty important ecosystem.

Unfortunately, the bight is in trouble — thanks to a certain accident-prone oil company.

Hey, remember that time BP was drilling for oil in the Gulf of Mexico and then their rig exploded and spent 87 days spilling an estimated 210 million gallons of oil into the water and killed 11 people and tens of thousands of animals and the entire area is still suffering from the aftermath more than five years later?

*Gasps and takes a breath.*

Oh, boy. Well, now BP is getting together with its friends to try that whole drilling thing all over again.

If BP spills oil in the Great Australian Bight, it'll take at least 35 days for support to arrive from Houston and Singapore — plus who knows how many more days after that before they finally plug the leak. And even then, there's a significant chance that a spill of any size will spread and contaminate the entire southern coast in under four months.

GIF via The Wilderness Society.

If by some strange miracle absolutely nothing goes wrong with BP's drilling, there's still the fact that millions of marine animals will be severely injured or killed by collateral damage from BP's underwater sonic blasting.

Simply put: The risk is too great.

So, two things: First, check out the amazing aerial video of Dave Price paddleboarding with his right whale friends.

Second: If that crystal-clear water strikes you as something to preserve, and you want those massive marine mammals to keep frolicking — or if you just don't want to see another oil disaster like the one that wrecked the Gulf of Mexico — take a second and sign this petition.