16 things you can do right now to advocate for women's rights and 4 you shouldn't.

Practicing intersectional feminism will make a more fair and just world for all. 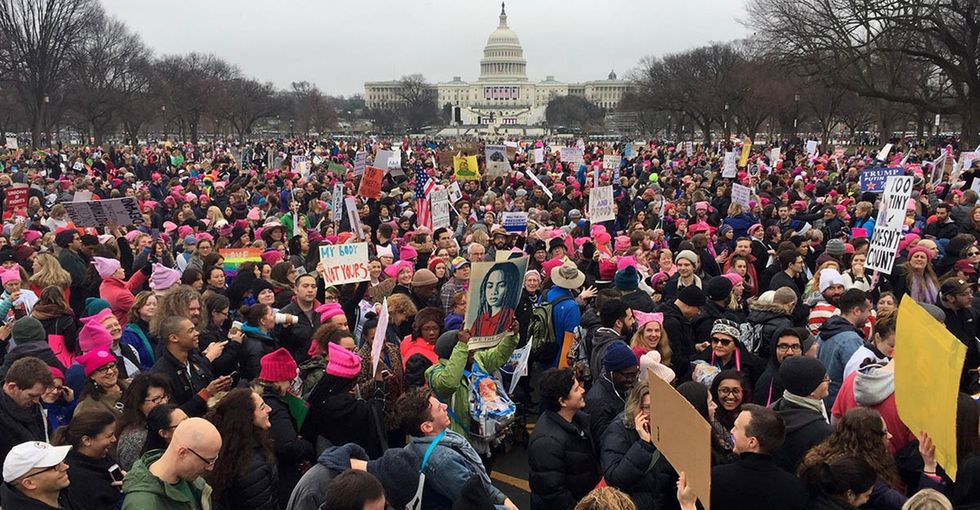 So you’re a feminist? That's awesome!

Feminism has been one of the most invaluable tools of resistance against fascism, racism, and bigotry. The advocacy work of feminism from decades before has led to voting rights for women, abortion rights, bodily autonomy, and more.

But at its inception, feminism wasn't as inclusive as it could be. The needs of minority women, women of different sexualities and gender identities, and women who were not of the middle and upper class weren't lifted up.

Erasure of the stories of different types of women — all deserving of equality — inspired the concept of intersectional feminism.

The idea behind intersectionality is that women’s overlapping identities — such as race, religion, class, and sexual orientation — affect the way they experience oppression in varying levels of intensity.

Women are multi-layered, complex beings with varied identities. We must advocate for all to be able to life live free of the structural and systemic injustices that prevail.

If we limit feminism to white, cisgendered, upper-middle-class women, we continue a violent cycle of white, heterosexual patriarchy that has made the lives of many unnecessarily difficult.

While there are many ways to become more intersectional in your feminism, here are a few steps to get you started.

All of these women and more experience racism, classism, homophobia, and structural injustice in various ways. This year has brought an enclave of racism, hate crimes, and problematic practices to the U.S. government and our communities. The people most susceptible to the consequences of this culture are marginalized women. They have the right to be sad, disheartened, and pretty darn mad. Listen to their anger, their ideas, and the problems that are a part of their identity.

Kimberlé Crenshaw's essay on the intersection of race and sex is a great place to start. Or stop by your local library and look into the works of feminists scholars like Bell Hooks and Audre Lorde.

Whitesplaining is to explain something through the lens of whiteness, often condescendingly. Instead, listen to the experiences, ideas, and perspectives of marginalized women to understand what a more equal world looks like to them. It may be uncomfortable or you may disagree, but don't be defensive. Understanding the stories of the women around you without bias is integral to creating a truly equal world.

4. Do read books by intersectional feminists.

Audre Lorde’s "Sister Outsider," Bell Hooks’ "Ain’t I a Woman: Black Women and Feminism," and Roxane Gay’s "Bad Feminist" are just a few of the many books available by badass women to get you started on your journey to becoming an intersectional feminist.

Reading the work of feminist also assists in financially supporting the work of women that, systemically, often make less than white women for their work.

Roxane Gay is one of the most well-known feminist writers and scholars. Photo by Thos Robinson/Getty Images.

5. Do pop that filter bubble.

You can find many women on Twitter that offer their words of wisdom, read articles on websites you don’t usually frequent, and look up information on topics that are new to you to expand you knowledge.

When you hear a friend, family member, colleague, or significant other making problematic statements, say something.

You don’t need to hold an hourlong lecture or break off ties with one another, but directly explain why what they said was problematic and the bigger picture behind their words. We often think that people can’t change, but many times, hearing something from a loved one rather than a social media account goes a pretty long way.

7. Do check out art from marginalized communities.

Art reflects life. It remains one of the most important and timeless outlets for human expression during politically charged times. Go to art shows that are curated by minority and women artists or that feature the work of those artists. Listen to music that discusses the challenges facing our world, and support minorities and LGBTQ musicians, painters, actors, and programming.

8. Do update your media diet by following journalists of color.

Joy Reid, Dylan Marron, Franchesca Ramsey, and Melissa Harris-Perry all have shows, platforms, or social media venues that showcase the experiences of various women and how to best become an ally.

9. Do donate and volunteer with organizations practicing intersectional feminism.

Planned Parenthood has received a plethora of donations (many in the name of feminism "favorite" Mike Pence), but they aren’t the only organization fighting the good fight for women all over the country. Sistersong: Women of Color Reproductive Justice, a Southern-based organization that works to get reproductive justice and human rights to women of color and indigenous women; Central American Legal Assistance, a New York firm that provides "free or low-cost service to immigrant communities"; and the Trans Lifeline, a hotline service run by transgender people for the needs of trans people, are all organizations that are inherently intersectionality feminist and in need of funds to continue fighting for the marginalized.

10. Do hire women of color, trans folks, and non-binary people.

Whether you’re a hiring manager, a teacher, or a community worker, use your space to advocate for the disenfranchised. This could mean hiring minorities and queer people, protesting in marches that advocate for the rights of communities you aren't necessarily a part of, and spending your money at minority-owned businesses.

11. Don’t speak for groups you don’t identify with.

Keep track of how your representatives are voting by using apps like Countable and iCitizen to follow key issues that impact marginalized communities. Attend town hall meetings, call your congressmen, and be vocal when problematic policies are placed on the table.

Sometimes, you may unknowingly say things that are problematic, myths, and outright wrong. Humans are flawed; it'll happen. But don't let that make you afraid to engage in dialogue out of fear of misspeaking. Instead, listen when someone corrects you, and work on being better and more understanding.

14. Don't spend money with companies that back problematic politicians and policies.

Where you spend your money is a personal choice, but there are several popular companies known to either directly support politicians advocating for discriminatory policies or outright support discriminatory policies. Learn about the history of your favorite companies and the folks who are running it from the top, and use this information to make ethical and well-informed choices.

15. Do buy from companies that support organizations fighting the good fight.

A number of companies use proceeds from sales to support feminism, black people, and other marginalized groups. Support businesses owned by women, minorities, immigrants, and Muslims to financially counter anti-intersectionality.

16. Do understand the lives of people with disabilities.

Learn more about the struggles of people living with disabilities by visiting platforms like The Disability Visibility Project. DVP increases dialogue surrounding issues within the disabled community and leads readers to Twitter platforms and online spaces with key information about ways to help and be an ally.

It's also important to remain vigilant in watching what happens with the Affordable Care Act and how those living with disabilities could be affected by any changes to the law.

17. Do fight for policies that benefit mental health programs.

Women are more likely to experience depression than men, and black women are experience major depression at higher rates than white women. With a rising percentage of hate crimes and uncertain policies ahead, it's imperative to support treatment and mental health programs for those affected most under oppressive policies.

18. Do know the news that affects trans and non-binary communities.

Know how bathroom laws, suicide rates, and poverty affect trans people. You can donate to organizations like The National Center for Transgender Equality, The Trevor Project, and The Human Rights Campaign to support trans kids, teens, and adults.

Supporting immigrant communities can range from doing activities like fighting against repealing Deferred Action for Childhood Arrivals (DACA) to hosting immigrants neighbors for dinner. Continue speaking out against police brutality and unethical deportation practices, and make sure to call out hate speech against immigrants.

20. Do live out your activism.

Resist. Resist racist and homophobic laws. Listen to — don’t argue with — people who tell you that you’re doing hurtful and problematic things. Use your privilege in ways that assist others of different backgrounds.

By living an intersectional life, we give women from all identities and backgrounds the chance to thrive and make the future a brighter place for all.