You may suffer from 'impostor syndrome.' Lots of smart people with signs of high achievement do.

Sometimes it feels like you have to wait for some official entity's permission to do the work you feel called to do. 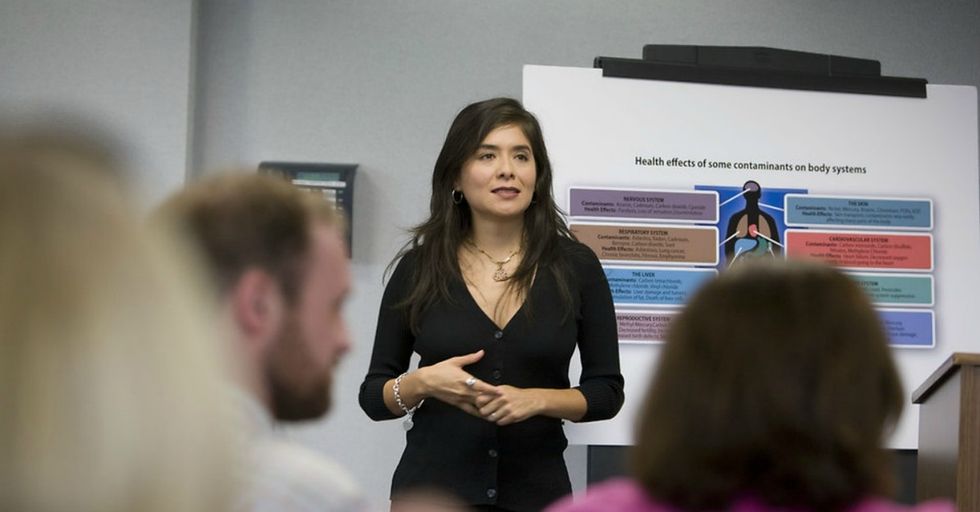 Lots of people have projects they've been sitting on.

For some people, it's legitimately because some thing they need to move forward has stalled or because they really do have too much on their plate to get to it.

But for many people, it's something else entirely. It's this gripping fear that can set in, making you doubt whether you have any place at all trying to do the work you feel called to do.

Putting yourself out there can be a real internal struggle. Image by Andrew Smith/Flickr.

Maybe it's a book you keep meaning to write. Maybe it's a class about a very specific subject matter you know about that you would like to teach. Maybe it's an art project you don't think anyone would take seriously. That obstacle is called "impostor syndrome."

I'm going to break down what it is here and give you two easy-to-remember steps that you can use to keep working on your project in spite of suffering from this fear.

There's a tension between what comes naturally and what we value.

"Two American psychologists, Pauline Clance and Suzanne Imes, gave it a name in 1978: the impostor syndrome. They described it as a feeling of 'phoniness in people who believe that they are not intelligent, capable or creative despite evidence of high achievement.' While these people 'are highly motivated to achieve,' they also 'live in fear of being "found out" or exposed as frauds.'"

Sometimes because a skill we have comes easily to us, we think it must not be that valuable. So when we try to pass it off as valuable, we think we must be fooling people.

Remember, what's easy to you may be really quite difficult for someone else, and that's why what you're good at has value. What's important is to try to see that fear for what it is and overcome it, even if just long enough to keep taking next steps with your work. And speaking of next steps:

There are pretty much two main steps to doing cool things.

I wish I could remember where I read this several years back because I'd love to give credit, but it's one of those things I can't seem to trace back (hit me up on Twitter if you know who coined these). But the tenets stuck with me at a time when I really needed to hear them. When you're feeling paralyzed by "impostor syndrome," it can be helpful to remember that there is a pretty simple process that nearly anyone who succeeds at anything has undertaken.

Create something! It doesn't necessarily have to mean forging something out of raw materials in a crafty, artsy way. If you write, write. If you kick ass at connecting with people on social media, build a community. If you make amazing bagels, make them! If you sketch, sketch. If you have brilliant ideas for your neighborhood, start working on them. Making the crucial leap from thought to action is what's important.

2. Bring that value to the market.

Now here's the thing. "Market" implies you have to figure out how to monetize it. But that's not necessarily true. It can mean that, but it doesn't have to. Really, bringing the value you've created to "the market" just means getting it in front of people. Show it to people who are doing similar things, show it to people who might be able to benefit from it, show it to people who just might get joy out of it. You may figure out a way to monetize it, and hey, that's cool. Or you may just spark a new collaboration or open a door to some other next steps in doing whatever the thing is that you like doing.

Understanding impostor syndrome can be life-changing — hear Carl Richards discuss on his show, "Behavior Gap," the day he found out from his therapist that this feeling he was having had a name.

Richards learned how to look at his impostor syndrome as a friend and ultimately was able to manage it and make it work in his favor instead of stopping him from accomplishing his work.

With a little practice, I bet you and I could do the same.