Trump supporter who complained about a lawn sign gets schooled by a 7th grader. 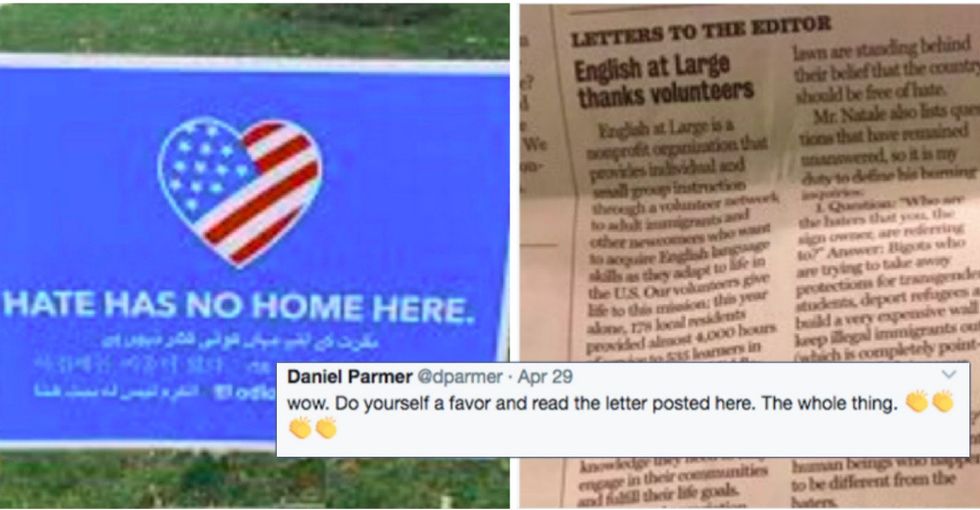 Sometimes it's important to remember where our national political debate has landed.

As the world took stock of President Trump’s first 100 Days in office (including us here, here, and here), there occurred an amazing moment of thoughtful rebuttal. The event took place in one of the more traditional and less incendiary of places: the local newspaper.

The issue at hand? A Winchester, MA man named John Natale, who identifies as a Trump supporter, wrote a letter to the editor complaining about the proliferation of lawn signs reading, “Hate Has No Home Here.”

Natale railed against the need for such a sign, and apparently claimed the “snowflakes” posting them stirred up hate.

Matthew Segal, a civil rights lawyer for the ACLU in Massachusetts, caught a response to Natale, published on April 29, 2017.

He then ticked off Natale’s fallacious argument one-by-one.

1. Question: “Who are the haters that you, the sign owner, are referring to?” Answer: Bigots who are trying to take away protections for transgender students, deport refugees and build a very expensive wall to keep illegal immigrants out (which is completely pointless and not helping your cause, but I digress).

2. Question: “What, or whom, do the haters hate?” Answer: Perfectly innocent human beings who happen to be different from the haters.

3. Question: “What is the evidence that there is significant hate in our community?” Answer: Me getting called homosexual slurs by students and adults alike.

4. Question: “Obviously, you are so morally superior that you may declare everyone who disagrees with you a hater (side note: this first part is a statement, not a question). Where, when, and how did you become the Lord High Decider of Morality?” Answer: Never. We just put a lawn sign down. Calm down, dude.

Segal posted a screenshot of the response, which has been retweeted thousands of times with shares and comments.

A note of irony (or is it hypocrisy?) here: Natale has a sign on his own lawn—supporting Trump—which Luke tactfully suggests removing.

May we all be inspired by this kid’s rational response. For the original piece, go here.