This woman destroys a wedding cake — and makes a point about sexual assault. 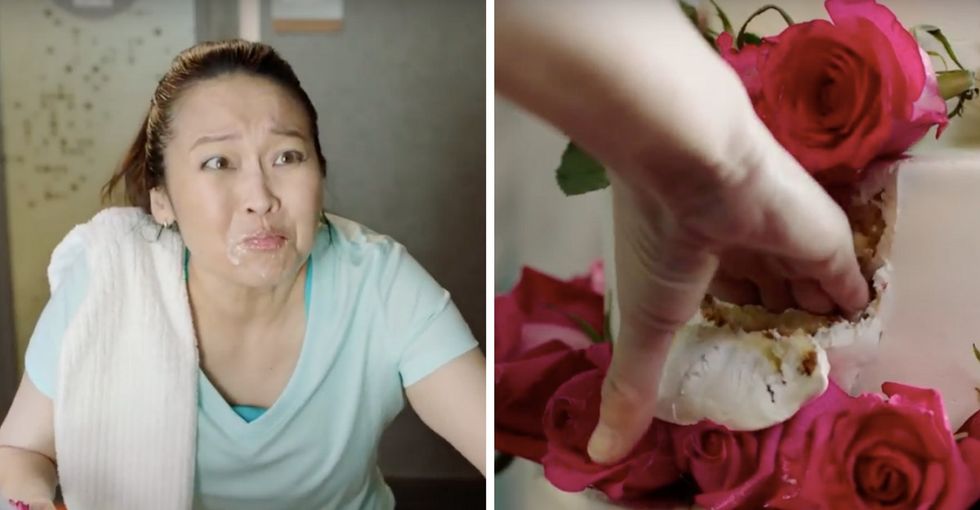 A PSA by the It's On Us campaign demonstrates just how absurd it is to blame survivors of sexual assault for their violators’ actions.

In the video, an admiring hotel guest wanders by a wedding cake — “It looks so delicious," she observes — before taking a huge handful of cake without asking the baker for permission. When the baker reacts, aghast, she blames him for making such a great looking cake.

"You were the one that made it so tempting," she tells him. "Tahitian vanilla icing and pretty little flowers? It's like you were begging me to taste it."

If that language sounds familiar, that's because it's something we hear all too often when talking about survivors of sexual assault. How was she dressed? Did she consume alcohol? Why wasn't she aware of her surroundings? Questions like these excuse violators and put blame on victims, adding to the stigma that can discourage survivors from speaking up.

It's On Us launched the PSA on the 23rd anniversary of the Violence Against Women Act. Written by then-senator Joe Biden, VAWA established a national hotline for victims to call, as well as greatly expanded the number of services and shelters available to survivors nationwide.

While the PSA is meant to be tongue-in-cheek, its message is a serious one. Victim-blaming prevents many victims of sexual assault from speaking out.

We have to do better.

"[This] announcement is a threat to the progress we’ve made and to the rights of every student on campuses across the country," It's On Us said in a statement. "It’s On Us campaign remains committed to fight for the full enforcement of Title IX and for the rights and protections of every student and every survivor."