This woman compared stroller shopping to wheelchair shopping. What she found wasn't great.

Are these chairs on wheels really that different? Liz says yes. 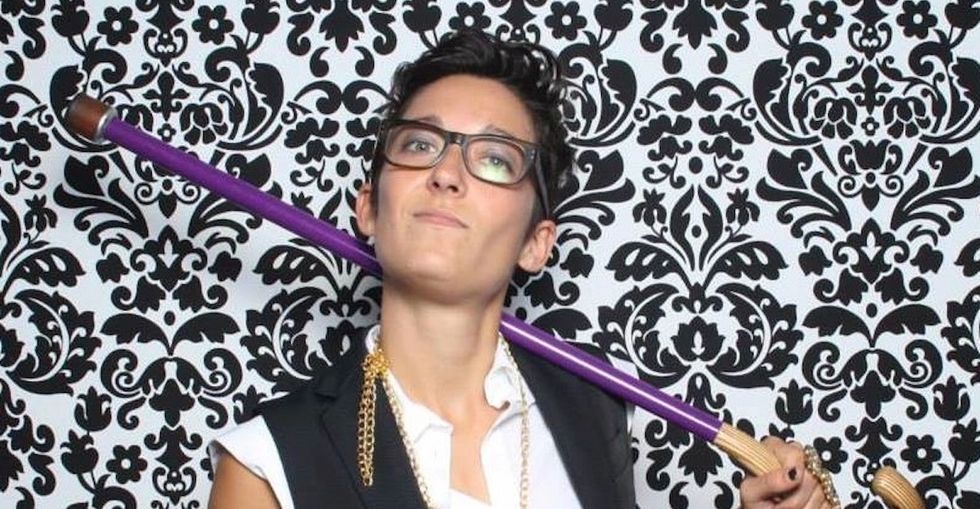 Amanda poses with her family. Photo via Amanda Berns.

David is a kind and optimistic man who navigates the world in a wheelchair because of multiple sclerosis.

Amanda's children are 18 months and 2.5 years old, so it probably comes as no surprise that Amanda spends most of her days pushing these two around the city in a stroller.

Upon reading the definitions for "wheelchair" and "stroller," I started to feel like they weren't really all that different.

They are both described as chairs on wheels, just intended for different people. Because I write about inclusion in retail and assistive devices, I thought it would be interesting to ask both Amanda and her dad, David, a series of questions — the exact same questions. When I posed them to Amanda, I used the word "stroller." With her father, I used "wheelchair."

My goal was to learn about what it's like to shop for these chairs on wheels. Here's how the conversation went:

Q: What's it like to navigate the world with a chair on wheels?

Amanda (stroller): It's not too bad. I go most places that I would like with two kids. There are a lot of places I can't get in or couldn't go to — but honestly I wouldn't want to bring my toddlers anyway. Sometimes it's awkward to go into places and feel like you are blocking everyone (because let's be honest — you are). But I figure I have to run errands with my kids just like the rest of the world. So I try to be kind and patient and not too annoying.

David (wheelchair): When you're in a wheelchair, people don't talk to you, generally. They treat you like you are a child. They talk to the person with you rather than talking to you. Like when walking into a restaurant to be seated, they ask the person with you how many are in the party. Or the check gets brought to someone else at the table instead of you. I can get in all public buildings, but going to people's houses is always tricky. I have to figure out beforehand if I can do it. I don't want to bother if it's not possible.

Q: How many chairs on wheels have you owned?

Amanda (stroller): I have owned ... eight? I think? Way more than I should admit.

David (wheelchair): I have owned two power chairs, one manual wheelchair, and a scooter.

Q: Why did you purchase separate ones?

Amanda (stroller): I purchased separate ones to account for different needs. I had a jogging stroller, a get-around-town stroller, an umbrella stroller for traveling. And then we had our second kid, so I needed to get a double stroller. I also bought and sold a few strollers because I had changed my mind after using them. I had a jogging stroller with a fixed wheel for two weeks and changed my mind. I got really good at buying and selling them on Craigslist.

David (wheelchair): I purchased separate ones because in each case I became weaker and needed more features. My wheelchair had to adapt to my changing abilities.

I was most struck by what they each had to say about their options when they shopped for a chair on wheels.

Amanda's response gave me a very clear picture of who she is as a person and a parent. David's response, on the other hand, left me having learned nothing about his personality and lifestyle.

It felt like Amanda was able to express herself through her purchases, but David was only able to express that he was simply a person who requires the assistance and the support of a wheelchair.

Amanda's stroller shopping narrative fits within the norm of any retail experience.

Amanda has bought and sold strollers on Craigslist. She has gone to run errands and has come home equipped with a new, store-bought stroller. I'm sure she's received at least one stroller through a baby registry. There's probably an entangled web of stroller hand-me-downs that weave her friends and family together.

Amanda and her two children at the beach. Photo provided by Amanda Berns.

Amanda anticipated that each of her children would rely on a stroller for about four years, but she also said that shopping for the chairs on wheels was really easy: "Pop into any baby store and voila!"

David's narrative, on the other hand, does not fit into a normal retail experience.

David and his grandchild. Photo via Amanda Berns.

"Insurance pays for one wheelchair every five years," David told me. "So you try to think of things you may need over the next five-year period."

This is difficult because David's disease progresses quickly. He also mentioned that ordering a wheelchair is a very slow process. "From the time we start shopping to the time I actually get my chair, it takes four to six months," he said. "And there's not much of a reason for the delay. I think there's not much competition in the wheelchair business, so they don't have any reason to rush it."

My curiosity about the assistive device market can feel confusing at times, but it turns out that this is a big problem.

When I first started thinking about why there are so few options for people with disabilities, I thought it was because so few of us exist. But in reality, our numbers are massive. At any given moment, 1 billion people on the planet have a disability. For some of us, the disability will be temporary. For others, it will change our lives.

A few years ago, the U.S. Department of Commerce published a study that stated two-thirds of the leading assistive device manufacturers were “passive in their pursuit of new ideas — or not interested at all."

This means that the companies who make products for people with disabilities do not invest in the research and development of new products.

It's my dream to change this problem.

I don't believe that I have the best idea in the world. I just have one of the only ideas out there, and it's for J.Crew to start selling stylish canes. I'd love to hear your ideas, too.

Me with my purple cane. I have spent the past 16 months asking J.Crew if they would sell a cane. It has been my goal, from day one, to ease the stigma of assistive devices.

Where is the wheelchair that invites David to be looked at? That grants him the validity to say he's picking up the lunch check?

Amanda and her family in San Francisco. Photo via Amanda Berns.

If you think equipment for the disabled should be as diverse as their needs are, why not share this and start a conversation?