This White House email shows a glaring commonality in who has Kavanaugh's back. 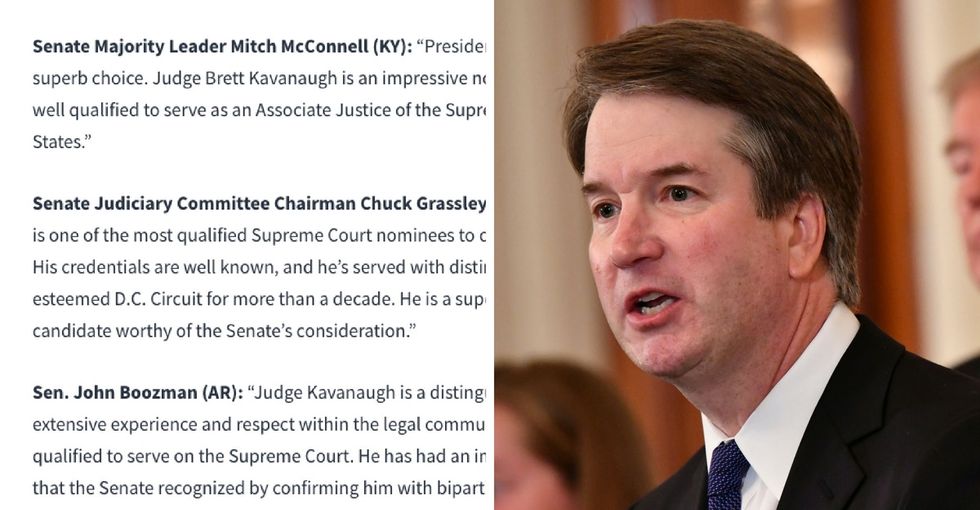 On July 9, President Donald Trump nominated Judge Brett Kavanaugh to replace Justice Anthony Kennedy on the Supreme Court. Shortly after, the White House rounded up a list of quotes from senators and representatives enthusiastically endorsing the decision and packaged them up nicely in a public statement to the media.

There was one glaring similarity between every person quoted in the White House's statement, though.

As noted by Planned Parenthood's Greg Greene, all 34 of them were men.

The White House sent an email tonight with 34 quotes from Congress endorsing Kavanaugh. Not one quote came from a… https://t.co/r0f9Zur2SU
— Greg Greene (@Greg Greene)1531194318.0

And none, by the way, were people of color.

Should anyone be surprised?

On the campaign trail, Trump promised to select staunchly conservative, pro-life judges. With the addition of Neil Gorsuch and Kavanaugh (should his nomination be confirmed by Congress), the Supreme Court's ideological make-up will have already taken a decidedly sharp right under the 45th president.

And Trump isn't even halfway through his first term in office.

Kavanaugh's track record suggests he may be a deciding vote to gut or end Roe v. Wade — the landmark 1973 ruling giving a constitutional right to those seeking abortion.

In 2006, Kavanaugh told Sen. Chuck Schumer he "would follow Roe v. Wade faithfully and fully," while getting confirmed to the D.C. Circuit Court but stubbornly refused to answer how he personally viewed the decision.

Last October, however, Kavanaugh sided with the Trump administration in Garza v. Hargana, blocking an imprisoned 17-year-old immigrant from terminating her pregnancy. Kavanaugh's opinion on the matter reflects how his presence on the Supreme Court could spell disaster for women's rights in the decades to come, advocates warn.

No wonder all 34 of those Kavanaugh cheerleaders were white men.

If Kavanaugh's nomination concerns you, reach out to your senator and tell them why — especially if you live in a state with a senator who could make the deciding vote.