This billboard for a sex toy is actually a message about women's empowerment. 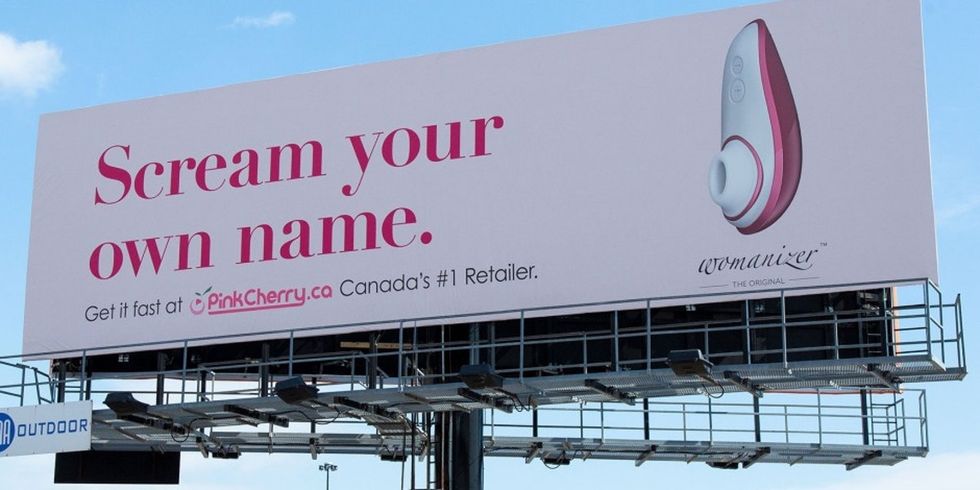 People tend to think of Canada as a progressive oasis and for good reason: quality health care, beautiful environmental landscapes and a general attitude of inclusion and tolerance are all very Canadian things.

Of course, nobody is perfect and it turns out that Canada has some fairly regressive attitudes when it comes to women talking about sex in public. But one company has countered that narrative and is making a huge splash with their new billboard that contains an unmistakable message of female empowerment.

“You can use sex to sell anything, except if it’s women’s pleasure,” said Stephanie Keating, marketing manager at WOW Tech Group, in an interview with AdWeek.

Much like in the U.S., Canada doesn’t have any explicit laws against advertising like this. But Keating says the unspoken rules most often result in such advertising campaigns getting turned down by major vendors.

In fact, the company claims that they’ve already set a North American record by having the billboard in place for just three weeks.

It has also already been nominated as one of the year’s best new advertisment, based in large part to the organic reaction from industry professionals and casual observers alike.

It's a major victory, especially when you consider that just getting the billboard up in the first place was a mountain many thought couldn’t be scaled.

“When you are in the business of promoting women’s sexual pleasure and all the benefits that go with that, you’re used to being rejected,” Keating told AdWeek. “We approach every media buy with trepidation, as we never know if our investment is going to see the light of day. Regardless of the medium—traditional, digital, social, podcasting—our ads have been censored even when they contain no explicit or suggestive content.”

At the same time, sex toys of all stripes are often given incredible amounts of free publicity, so long as they are targeted at and for men.

In 2016, Chile's Economy Minister Luis Felipe Cespedes got into hot water when he gleefully posed with a female sex doll after controversial comments comparing his country's economy to women saying both needed to be "stimulated" in order to be activated.

But because of the incredibly positive attention, the billboard has received, they’re already planning to extend the billboard’s ad buy into 2020 and the company says there are looking at other large scale advertising platforms to expand the Womanizer’s reach.

“We have always seen the value in this brand,” The Garden co-founder Shari Walczak told AdWeek.

“This is a company that believes in the importance of sexual wellness and empowerment for women, and the value of developing and maintaining intimacy between partners.”