This 2-year-old with Down syndrome is breaking down stereotypes around child modeling. 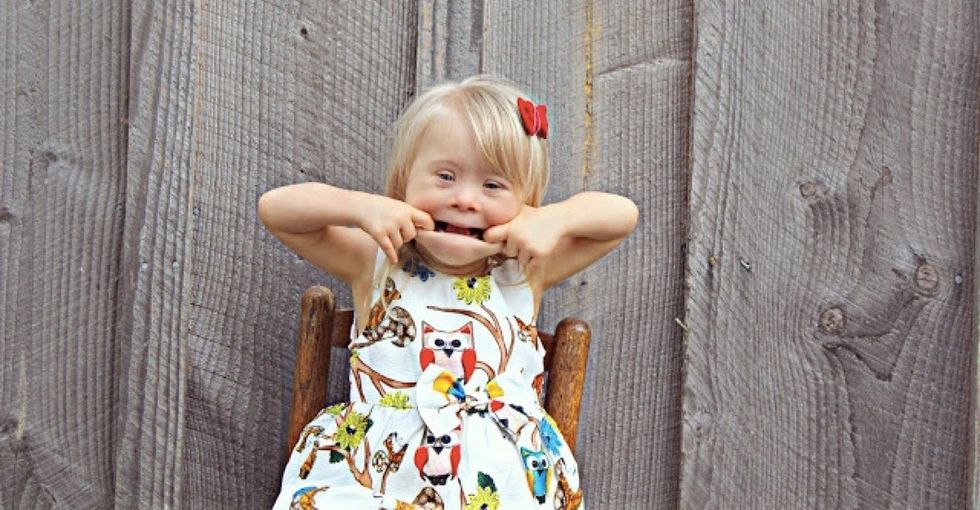 Tiffany Stafford was flipping through a catalog when she saw a Target advertisement that floored her.

Her two sons, ages 6 and 8, immediately pointed out the model, saying “Mom, she looks just like Sissy!"

Tiffany had never seen something like this before: The child model had Down syndrome, just like her 2-year-old daughter Ellie.

Tiffany's crew (from left): Luke, Ellie, and Will. All photos via Tiffany Stafford, used with permission.

Then she started thinking about Ellie. She's friendly; she's playful; she loves to show off her favorite poses — the idea made sense.

After giving it some thought, Tiffany sent in photos of Ellie to modeling agencies, thinking, “It's worth a shot."

She reached out to agents near Aurora, Oregon, where she lives, and ended up connecting with an agent and ultimately getting Ellie signed to a modeling agency for print publications.

She was excited about the modeling idea for several reasons. First, she knew that Ellie loved being in front of the camera. But, second, and just as important, she believed Ellie would inspire children with disabilities and their parents.

In August 2015, Ellie booked her first campaign for Hooray Haroo, a children's clothing brand based in Portland, Oregon.

“Ellie is such a natural," Tiffany said. “She has some go-to poses like pushing her shoulder up, or putting her finger to her cheek ... we call that her 'model pose.'"

One of the best surprises came from the people who saw the advertisements. Tiffany received tons of love from family and friends, and eventually even from media outlets. KGW Portland interviewed her to do a story on Ellie, and a few days later she received a call from a friend that the story had been picked up by USA Today.

Tiffany says a lot of Ellie's success came about after she saw the inspiring work of the nonprofit organization Changing the Face of Beauty.

The group aims to get people of all abilities into mainstream advertisements and media, and they were able to collaborate on a campaign.

Tiffany is an advisory board member of the Down Syndrome Diagnosis Network and has recently joined forces with Changing the Face of Beauty to launch the campaign “Who's Next?" which encourages individuals with disabilities and their families to call out retailers and suggest they be more inclusive in their advertisements.

The less-serious side of modeling.

Tiffany doesn't want to push Ellie into a certain career.

She's not obsessed with the idea of raising a fashion icon (it's fine if Ellie doesn't want to be a model).

But for the moment, she is excited to help battle the stigma around having a developmental disability.

That the next generation will be even more understanding and loving toward people of all abilities.