These postpartum rules for moms in the 1960s are going viral because they're ridiculous. 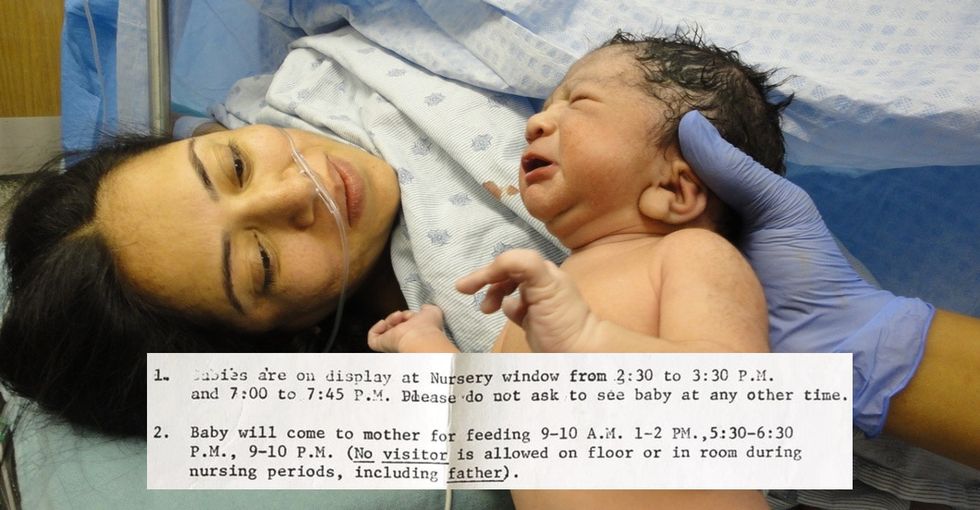 If you don’t believe the hospital experience for new mothers has changed that much in the last few decades, read through the mind-blowing instructions one institution issued every one of their postpartum patients.

“My mom was going through her things and we saw this, it's rules in regards to just having a baby,” Micala Gabrielle Henson wrote alongside the document which she posted on Facebook. The letter had been issued to her grandmother the day her mother was born.

Henson, who welcomed her first child, a little boy, just five months ago, says she was “so surprised and kind of in disbelief” when she read through some of the issued “routines” and instructions ordered by nursing service department, which claimed to be devised in order to “safeguard you and your baby.”

First off, forget about spending your hospital stay bonding with your new baby.

And when it comes to actually nursing your baby, they get even stricter/more absurd. Another rule lists the hour increments (three hours apart) when “baby will come to mother for feeding.”

During the first 24 hours after the birth, a mother is only allowed to nurse her baby for five minutes, followed by “approximately 7 minutes” on the second and third days and 10 to 15 minutes the fourth and fifth. “If Baby Nurses Longer It May Cause The Nipple To Become Sore.” Because, um, a sore nipple is much worse than a hungry, screaming newborn.

Note that “No visitor is allowed on floor or in room during nursing periods, including father,” because god forbid someone else — especially the baby’s father — get a glimpse of that breastfeeding action. I mean, they might even see a (gasp!) boob.

Oh yeah,  and while smoking in general isn’t discouraged, nurses lay down the law when it comes to lighting up. “Do not smoke while baby is in the room,” they instruct. Because back in the 1960s, smoking in the hospital was totally a thing.

The nurses also had some pretty strong orders about what foods new moms should absolutely not to eat.

They issued the list of forbidden foods in all caps, just to make sure everyone knew how seriously to take the restrictions. “DO NOT EAT CHOCOLATE CANDY, RAW APPLE, CABBAGE, NUTS, STRAWBERRIES, CHERRIES, ONIONS, OR GREEN COCOANUT [sic] CAKE,” they warn. But, perhaps brown coconut cake is okay? We may never know.

Commenters were as shocked as could be expected. Some wanted to know what green coconut cake is and why exactly it was blacklisted? Others couldn’t believe new mothers weren’t discouraged from smoking in general (“Ladies put your cigarettes down when you feed the baby,” joked Sydney Miller). However, a slew of mothers pointed out that they experienced similar restrictions — just twenty years ago!

“I would be barred from the hospital!” wrote Lisa O’Neil. “21 years ago I had my first baby and the rules were pretty ridiculous then also, my urge to mummy my daughter won me the right to be ignored by the midwives.”

While we’re all pretty blown away by the antiquated practices of 1968, as a new mom, Henson found the nursing rules to be particularly shocking — especially the suggested breastfeeding time increments.

“I absolutely could not believe that,” she says. “I guess I had never thought about how breastfeeding wasn’t always such a big thing. But wow, only breastfeeding my baby for five minutes?! Especially when he was a newborn?! My baby would be so upset!”

The letter has been shared thousands of times, and rightfully so. Every single person on the planet needs to read it, take a moment to absorb its ridiculousness and be reminded of how things have seriously changed for the better in the last 50 years — at least in regards to birthing a baby!

Nike continues to pave the way toward a cleaner, better world for athletes and sport with Forward

Nike’s culture of innovation has done it again.

As one of the world’s largest sports brands, Nike is in a unique position to play a significant role in creating a more sustainable world. Nike has taken on this monumental responsibility by relentlessly pursuing its waste-reducing Move to Zero policy. The company's ultimate goal is zero carbon and zero waste, all in an effort to help protect the future of sport.

“Athletes around the world are telling us that climate change is impacting them and their ability to perform at their best,” Seana Hannah, VP Sustainable Innovation, NIKE, Inc., said in a statement shared with Upworthy. “As part of our commitment to serve the athletes by offering more sustainable options and meeting our bold, science-based impact targets, we’re introducing a material innovation that can be adapted to different lifestyle and performance purposes.”

Over five years of research went into the development of Nike Forward and the company believes the positive environmental effects will be well worth the wait.

What would certain icons look like if nothing had happened to them?

Mercury would be 76 today.

Some icons have truly left this world too early. It’s a tragedy when anyone doesn’t make it to see old age, but when it happens to a well-known public figure, it’s like a bit of their art and legacy dies with them. What might Freddie Mercury have created if he were granted the gift of long life? Bruce Lee? Princess Diana?

Their futures might be mere musings of our imagination, but thanks to a lot of creativity (and a little tech) we can now get a glimpse into what these celebrities might have looked like when they were older.

Alper Yesiltas, an Istanbul-based lawyer and photographer, created a photography series titled “As If Nothing Happened,” which features eerily realistic portraits of long gone celebrities in their golden years. To make the images as real looking as possible, Yesiltas incorporated various photo editing programs such as Adobe Lightroom and VSCO, as well as the AI photo-enhancing software Remini.

“The hardest part of the creative process for me is making the image feel ‘real’ to me,” Yesiltas wrote about his passion project. “The moment I like the most is when I think the image in front of me looks as if it was taken by a photographer.”

Yesiltas’ meticulousness paid off, because the results are uncanny.

Along with each photo, Yesiltas writes a bittersweet message “wishing” how things might have gone differently … as if nothing happened.
Keep ReadingShow less
art

Heroic sanitation workers save abducted, 10-year-old girl while on their trash route

This article originally appeared on 02.09.21

At 1:30 am on Monday morning an AMBER Alert went out in southern Louisiana about a missing 10-year-old girl from New Iberia. It was believed she had been kidnapped and driven away in a 2012 silver Nissan Altima.

A few hours later at 7 am, Dion Merrick and Brandon Antoine, sanitation workers for Pelican Waste, were on their daily route when they noticed a vehicle that fit the description in the alert.

"Can you move to the birthing ball so I can sleep in the bed?"

After working six years as a labor and delivery nurse Holly, 30, has heard a lot of inappropriate remarks made by men while their partners are in labor. “Sometimes the moms think it’s funny—and if they think it’s funny, then I’ll laugh with them,” Holly told TODAY Parents. “But if they get upset, I’ll try to be the buffer. I’ll change the subject.”

Some of the comments are so wrong that she did something creative with them by turning them into “inspirational” quotes and setting them to “A Thousand Miles” by Vanessa Carlton on TikTok.

“Some partners are hard to live up to!” she jokingly captioned the video.

Wait, what are they saying? People name song lyrics they sang wrong for years

It's just a 2-minute video of someone mending a hole in a sweater, but people can't look away

Dad had no idea he was auditioning for 'Britain's Got Talent.' He brought the house down anyway.