These 3 Men Were Once Suicidal. They Aren't Anymore, And Here's Why.

When you're so down that you can't imagine feeling good ever again, death can feel like a good alternative. But no one finds a way out of that deep, dark hole without some kind of help from another person. So why do we make it so hard for men to talk about how they're feeling — even when their lives may be at stake? 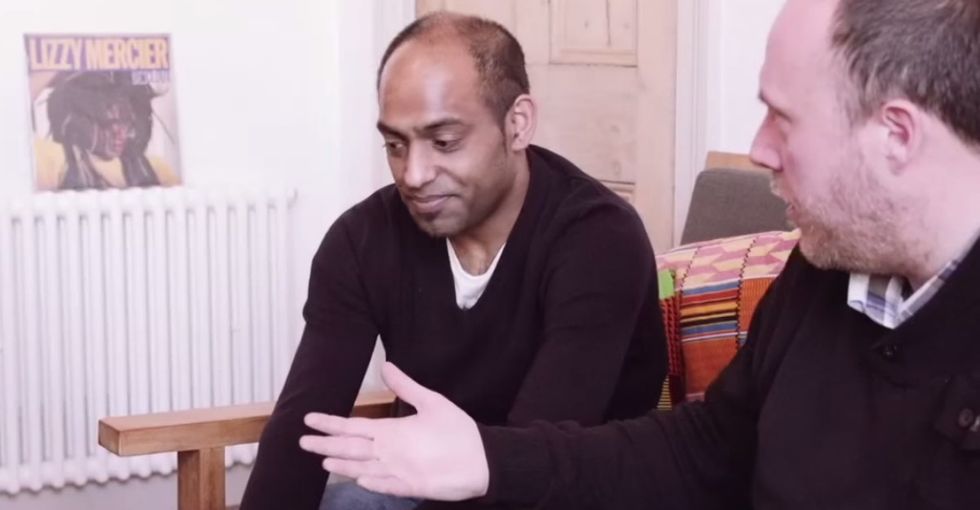 According to the World Health Organization, men are twice as likely to die from suicide than women, yet women are more likely to seek treatment for a mental health issue. Help change that by sharing this video.

Like many other people, the COVID-19 pandemic had Julian Shapiro-Barnum feeling low.

The 22-year-old comedian and actor had spent his senior year at Boston University entirely online, and after moving back home to New York, he felt constricted to his apartment.

"Being stuck in that place was really challenging," Shapiro-Barnum said -- but instead of basking in his sorrow, he decided to take his problems to the streets to get feedback from the experts. In this case, kids.

Marim Albajari was a high school senior living in New York City during the onset of the pandemic. Suddenly, the prospect of starting college directly after graduation no longer seemed like a sure thing.

Due to a lack of resources to help her navigate the college application process, she was almost a victim of the "summer melt"—a term used to describe students who cancel plans to attend college before classes begin.

The "melt" is a common problem disproportionately affecting students from low-income families—many high-school graduates who have been accepted to college and plan to enroll are quickly knocked off-course if they do not obtain sufficient financial aid, miss administrative deadlines, or most importantly, lack support from family and friends.

The COVID-19 pandemic worsened the problem, as high school graduates who immediately went on to college in Fall 2020 declined by nearly 7% when compared to the previous year, for obvious reasons. Even without a pandemic, finding the right information about things like course load, financial aid, and housing can be time-consuming and overwhelming for students without a guide.

That's where Oli comes in.

A free AI chatbot service, nicknamed "Oli", is offered by The Common Application (Common App). In 2018, the Reach Higher Initiative merged with Common App and partnered with AdmitHub to develop the AI chatbot that would eventually become Oli. The group then joined forces with the College Advising Corps to offer counseling services to get more first-generation, low-income, and diverse students enrolled in college.

Now a freshman at John Jay College of Criminal Justice, Albajari can attest to the value of Oli's help.

With the help of $1.4 million in grant funding from the Capital One Foundation, nearly 675,000 high school students applying to colleges through Common App have gained access to information on admissions and scholarship opportunities.

"The Capital One Foundation saw the need and stepped up to help by moving as quickly as possible to maximize the number of people that could be helped," says Eric Waldo, executive director of the Reach Higher Initiative at Common App. "Our colleagues at The Foundation have gone over the top to connect us with resources across their organization and are continuing to help us achieve our mission to assist as many students as possible through its continued support to the Class of 2021 and beyond."The result? Resources provided by Oli have saved students nearly 18,000 hours that traditionally would've been spent consulting with an advisor.

"Oli was my guardian angel," Albajari said. "As a first-generation college student, I didn't have the privilege to get the help I needed at home on my college journey. Even though Oli may be a robot, I felt like someone had my back."

The result? Resources provided by Oli have saved students nearly 18,000 hours that traditionally would've been spent consulting with an advisor.

"Oli was my guardian angel," Albajari said. "As a first-generation college student, I didn't have the privilege to get the help I needed at home on my college journey. Even though Oli may be a robot, I felt like someone had my back."

"It is imperative that all graduating high school students be equipped with the tools necessary to avoid delaying their dreams of attending college," says Andy Navarrete, Head of External Affairs at Capital One. "The playing field of opportunity in higher education has never been level, and the COVID-19 pandemic only made that fact more clear. We're committed to continuing our efforts to support equitable access and persistence for aspiring college students of all backgrounds."

That support from The Foundation comes alongside an initial $200 million, multi-year commitment from Capital One to advance socioeconomic mobility through the Capital One Impact Initiative.

In addition to exclusively funding the initial launch of the AI chatbot for Class of 2020 students, Capital One is continuing to expand this resource by contributing both financially and through pro bono support from its tech associates. Since the chatbot's inception, nine associates from Capital One have volunteered 500 hours of pro bono service to optimize the chatbot's ability to help prospective college students.

"As a first-generation college student, I remember having a lot of the same questions that students interacting with the chatbot were seeking answers to," says Elizabeth Souza, a Capital One associate who helped support the development of this chatbot. "Volunteering to support the development of this chatbot has been a tremendous opportunity to ensure equitable access to technology and resources for all."

Courtesy of Capital One

Those efforts in turn helped first-generation college student Jennifer Sanchez, a California native now finishing her freshman year at the University of La Verne. With the help of resources provided by the AI chatbot, Sanchez earned a scholarship, received a grant to help offset the cost of housing and was connected with councilors at each university she received admission to best decide which school would be the best fit for her.

"I was considering not even going to college because of how the pandemic financially impacted my family, but that chatbot gave me access to financial and educational resources that I would've never known existed without it," Sanchez said. "I think of that Oli like a friend. It supported me on my journey, like a friend would, every step of the way."

A little encouragement and access to the right information can take us places we never imagined.

education
Get stories worth sharing delivered to your inbox
By signing up you agree to Upworthy's privacy policy.
Trending Stories
women and girls
Macy's Gives