The first concert of Taylor Swift's new tour was an epic night for these kids. 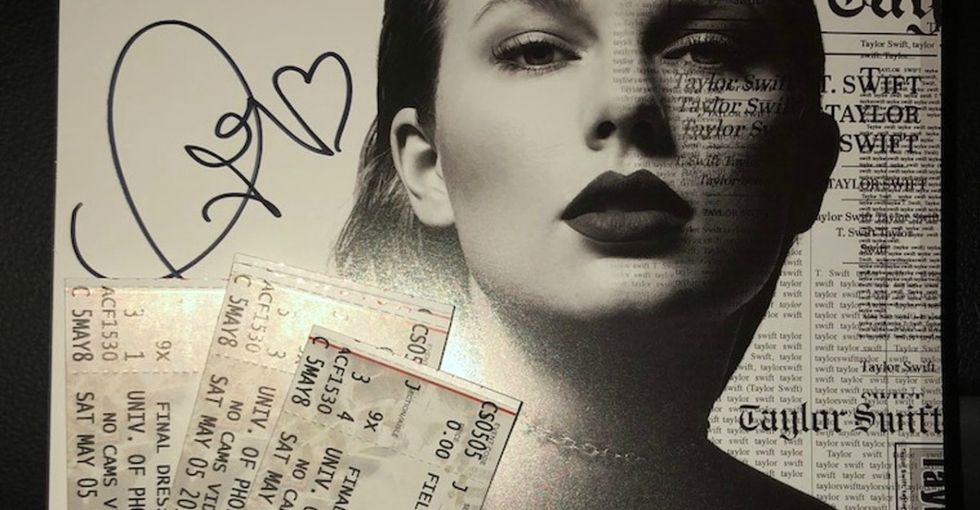 Are you a Taylor Swift devotee?

If so, you already know that the artist whose most earnest pop songs you belt out at karaoke is about to embark on a huge tour in Spring 2018. And if not — you probably still know.

Thanks to a load of publicity about the tour's kickoff, all of us probably know at least something about Swift's upcoming worldwide extravaganza — such as that she's using something called a "rocket sled" to torpedo herself from one side of backstage to another. Sounds terrifying. But hey, she's the professional.

Swift's first show of the tour was done for a select group of VIPs — a very special group of superfans.

On May 5, Swift played a private show in Arizona.  The attendees, all of whom had been sworn to secrecy, were 2,000 local foster kids and their families. And if you're thinking, "oh my god," let me assure you that's what was running through the invitees' minds as they opened the email from Arizona Association for Foster and Adoptive Parents (AZAFAP).

"We first thought this was a spam [email] or something," Janine Waldera tells me. She took her grandchildren, whom she's adopted, to the show. When she accepted the invite, she says, she also agreed to abide by strict rules of confidentiality. No phones, no cameras, and no telling anyone about the specifics of the show. (So if you came to this post looking for a setlist, friend, stay for the feels instead.)

Photo by Janine Waldera, with permission.

The show itself? Like nothing anyone expected. AZ Central reports that concert-goers were greeted with tables of snacks and drinks at the University of Phoenix stadium in Glendale, Arizona. Then Swift came out, said hello, and asked if anyone would mind if she did her entire two-hour show. Unsurprisingly, everyone held their peace.

"It was overwhelming to see so many people that came," Waldera told AZ Central. "[Swift] told all of us that we had more energy than if the stadium was filled and a sold-out concert. Kids were so excited, screaming, dancing, and they let everybody walk around."

But no one had seen anything yet: Swift, who's been a lighting rod in popular culture  ("do we love her or do we hate her?" seems to be the concept behind her latest album) had a few more surprises. After giving the kids and their families even more sugar — she served pizza and brownies and, oh my god, this show sounds amazing because do you know how much that stuff costs at the stadium? — she took the time to meet with everyone. In the parking lot, AZ Central reports, Swift's parents handed out souvenirs.

We had the most amazing experience seeing Taylor Swift’s Reputation concert last night. She gave a private concert for her dress rehearsal to 2000 of us that are foster adoptive families. She even provided pizza and treats. She was so nice and friendly. Thank you azafap and #taylorswift for giving us this opportunity!

The concert was may more than just entertainment.

Sure, the kids had a great time with Swift, but they also got to meet other kids who have had similar experiences. And the invitation, AZAFAP president Kris Jacober told reporters, was "like a miracle." One that's especially poignant in May — National Foster Care Month.

"The association's been around for 13 years," she said, "and nobody has ever made us an offer like this. I know this doesn’t happen every day. We just are deeply appreciative of her kindness toward our families."

Swift was sending an important message with her show: Foster families deserve to be seen and recognized.

Waldera tells me that one of the best parts of the evening was families making connections with each other. "It was a great way of networking with other families," she says. As for the kids? "It's a memory my children will always cherish."

"There was no way we could have afforded to take our children to this amazing concert," she enthuses. "Taylor was so generous with her time, and she made all the kids there feel like they were rock stars!"

Call it what you want (isn't that a Taylor Swift song?), but the night was truly magical. And even if you aren't a fan of her music, we can all be fans of the fact that Taylor Swift is an artist who gives back to the community.