Team USA has 10 black athletes at the Winter Olympics. Here's what 2 of them had to say. 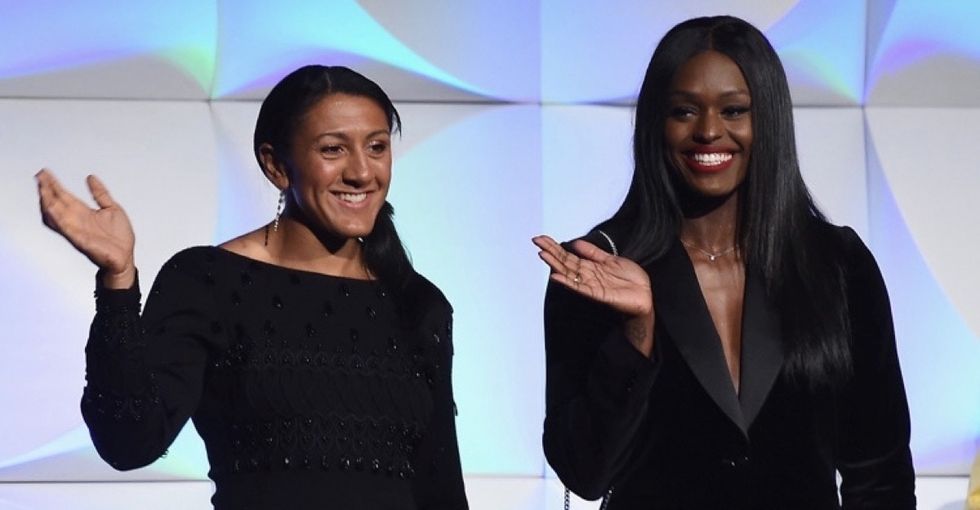 More than 2,500 athletes will compete in the Winter Games and only 45 of them are black.

Ten of those black athletes represent the United States.

Four of them are on the women's bobsled team.

Reaching the grandest stage in sports is an impressive accomplishment on its own, but the women of USA bobsled continue to beat the odds, representing the country and black women as they compete for a spot on the podium. I spoke with two of the five members of the team, to learn more about competing as black women in this thrilling winter sport.

Elana Meyers Taylor and Lauryn Williams of the United States in Sochi, Russia, in 2014. Photo by Alexander Hassenstein/Getty Images.

Elana Meyers Taylor and Aja Evans hoped to make their Olympic debuts in the Summer Games, but life had other plans.

Meyers Taylor, 33, was a competitive softball player through college. When she didn't make the Olympic team in the sport, her parents suggested she look into bobsled.

"They saw Vonetta Flowers compete in 2002, and they were like, 'She's strong and athletic and she's a black woman like you. There's no reason why you can't be involved in bobsled as well,'" Meyers Taylor says.

It didn't matter that she didn't even own a winter coat at the time — Meyers Taylor saw the speed and excitement of a bobsled run and knew it was for her.

Aja Evans comes from an athletic family. Her father was a competitive college swimmer, and her brother spent eight seasons in the NFL. It was no surprise when Evans became a standout athlete at the University of Illinois, earning Big Ten Titles in shot put. When she didn't earn a spot on Team USA for the 2008 summer games, Evans turned her attention toward the ice.

"When I brought [my family] the idea of bobsled, they were a little taken back by it because it's not your typical sport," Evans said. "Once I explained to them my potential in the sport and what I could bring to the table, they were all for it and once we started producing results and really getting into the swing of things ... I received a lot of support from my family and people in my city and all around the country."

Being a black woman at the center of Winter Olympics success is nothing new for these athletes, but that doesn't mean it's easy.

"It's always an honor to represent your country, and it's always an honor to represent black women, especially in a sport where we're not typically represented," Meyers Taylor says. "Yes, there's some inequalities and injustices that go on in our country ... so we're just trying to go out there and do what we can every single day and not only represent us, represent the U.S., but also represent our race and ethnicity and show the world that no matter what you look like, you can be successful in whatever you want to be."

Like Meyers Taylor, Evans takes pride in her unique space on Team USA.

Evans is arriving in Pyeongchang ready to return to the podium. Her confidence is buoyed by the people rallying behind her, at home and abroad.

"I'm very confident in myself, whether it be because of who I am as a black woman or the things I've accomplished as an athlete for Team USA," she says. "I do feel like when we step into rooms, we draw attention, whether it be good or bad. The main thing is that we own it, and we wear it well. It's not in a cocky way. It's not in a negative way or a timid way. We're proud to represent who we are."

Regardless of their differences, what unites Team USA is their drive to win.

After years of hard work and dedication, both women have been successful in bobsledding's biggest competitions.

What's it like inside the sled? Evans and Meyers Taylor shared what you won't see on TV.

It's an adrenaline rush like no other as the athletes speed down the 1,500-meter course with 16 curves, each with varying degrees of difficulty. The sleighs are typically made of metal and fiberglass and can reach speeds of up to 84 miles per hour.

"I think the most intense moment for me at the start is right when I'm about to run. Just standing on that line and feeling that heart in my chest. You're kind of zoning out all the noise and just focused on putting everything you can into the ice," Evans says. "Once [my drivers] put their hand up and signal that they're ready to go, it's just one speed from there."

Aja Evans during the women's bobsled event at the 2014 Winter Olympics. Photo by Alex Livesey/Getty Images.

For the most part, the trip down the icy track is a blur, especially for the brakeman.

"The brakeman can't see anything. They're in the back; their head tucked between their knees," Meyers Taylor says. As for the pilots, "We're actually driving the sled; we're not just leaning."

That means the pilots have to negotiate those twists, turns, and bends, their slopes ranging from 8-15%, with true precision. While they can't see the clock on the way down, there are ways to know if they've hit their mark.

Meyers Taylor, Evans, and the rest of Team USA take to the ice and bobsled coverage begins Sunday, Feb. 18.