Should athletes be held accountable for their old tweets? Here's a thoughtful answer. 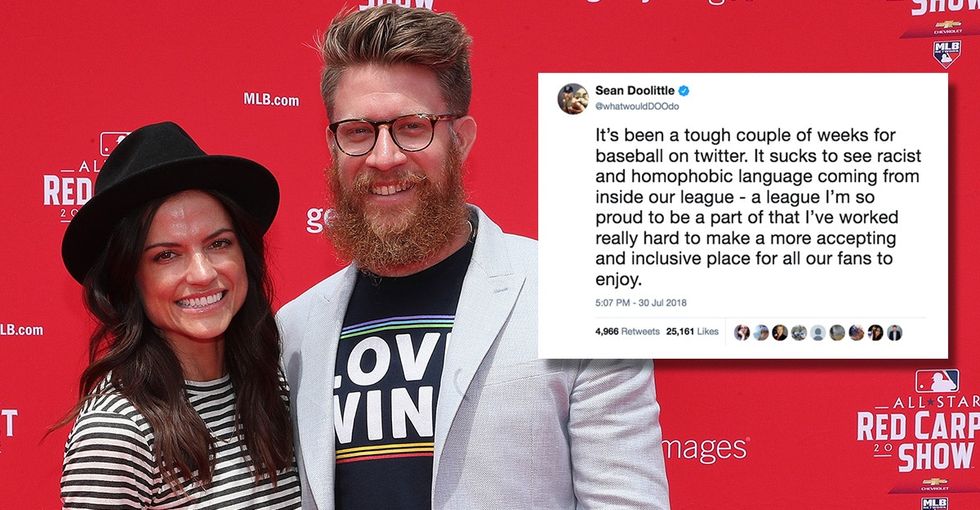 We've all said regrettable things, and sometimes those things come back to haunt us. Among Major League Baseball players, that's been happening a lot lately.

During June's All-Star Game in Washington, D.C., Milwaukee Brewers relief pitcher Josh Hader became a trending topic on social media, and it didn't have anything to do with the fact that he was getting absolutely pummeled on the field.

No, it was for something else entirely: tweets he sent in his teens.

Among them were references to "white power," several uses of the n-word, and another that simply read, "I hate gay people." After the game, Hader was inundated with questions from reporters about the tweets, and by the following day, he issued an apology. Needless to say, this was probably not how the 24-year-old hoped to remember his first career All-Star Game.

It's starting an important conversation about how responsible people should be for things they used to believe or said in the past.

Turner's teammate Sean Doolittle decided to weigh in — where else? — on Twitter.

Doolittle and his wife, Eireann Dolan, have a long history of working with charities and supporting causes they believe in. From supporting the LGBTQ community to sharing Thanksgiving dinner with Syrian refugees, Doolittle and Dolan aren't afraid to speak up for marginalized people.

On Twitter, Doolittle tried to put this current issue in perspective, discussing his personal efforts to create a more inclusive league for players and fans.

He discouraged defenses about how long ago something was said, urging people to stay focused on the content.

At the same time, he's not calling for anybody to be shunned for something said a decade ago — because we all have the opportunity to grow as people every single day.

He also shies away from calls for athletes to stop using social media for fear that something they say will be used to attack them in the future. Instead, he calls on them to find ways to use social media to create a positive impact. If players have said things they no longer believe, Doolittle believes they should delete them as a way to show they've grown.

Some might disagree with Doolittle's assessment, and that's totally fine.

Putting that aside, though, this is an opportunity for us to be better people in the present.

I asked Doolittle why he decided to speak out on this topic. He tells me that there's absolutely a personal element involved, given both that he and Dolan have always made an effort to foster inclusivity — as well as the fact that he has close friends and family who've been targeted with the same kind of language used in Hader's, Newcomb's, and Turner's old tweets, and he knows how much it can hurt.

"I think we have to allow for a demonstration of growth. We can't just bury these guys; this has to be a learning experience so that the next generation of athletes learns not just that it's wrong to use that kind of language, but why it's wrong to use that kind of language. Because every time it's used, even if it's used in jest, it normalizes it. The lesson shouldn't be about making sure we hide mistakes we made in our past, it should be about showing that we've grown from them."

The lessons here can be applied far beyond the world of baseball.

I've said a lot of things that I regret in my life. I've been mean, cruel, and hurtful with my words. It's not something I'm proud of, but it's the truth.

While I'd like to think that I've grown a lot since then, and I've tried to put in the work necessary to be the best version of myself today, there's absolutely nothing I can do to change a single one of those regretful moments. Maybe, at the very least, it shouldn't become a barrier to current and future improvement.

Growing beyond our mistakes enough to recognize them and avoid repeating them is important. If you make a mistake — whether that's telling offensive jokes, lashing out at a friend who got on your nerves, or tweeting slurs when you were young — at least try to learn from it. Empathy-fueled growth can take us a long way toward becoming better people.