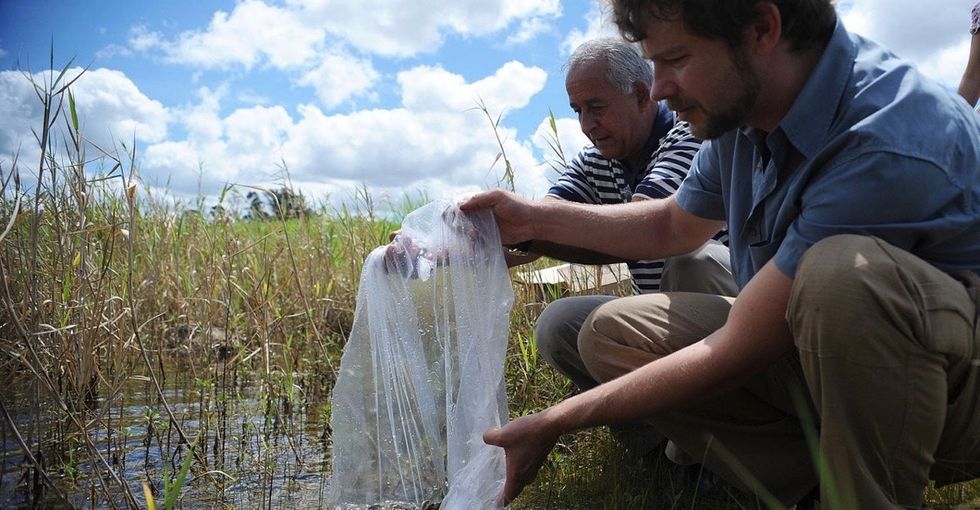 Let's be honest: No one likes mosquitoes.

I try to avoid broad sweeping generalizations like that — but c'mon. Mosquitoes? Seriously? Gross. And unless you're a frog prince (in which case you're dealing with some other issues), you probably share my distaste for the little bloodsuckers.

They show up invited and ruin your picnic, leaving behind a wretched rash of itchy red bumps in their wake.

Worst case? They gift you some disease like malaria, West Nile virus, or the recently-relevant Zika virus. And if you thought bug bites were awful, try putting up with something called breakbone fever.

Or, ya know, death. Did I mention that mosquito-borne illnesses kill more than half a million people every year, making them the deadliest creatures on the planet? And climate change is making it increasingly easier for them to spread their once-tropical sicknesses to the rest of the world.

Not bad for a bug that only lives around 10 days and hardly travels the length of two football fields in its lifetime.

Just a chill mosquito infecting your blood stream with a horrible sickness. GIF via thegatesnotes/YouTube.

That's why we need more of them, and fast.

Wait — what?!?! How do more mosquitoes help anything?

For that answer, you'll have to ask the folks at Oxford Insect Technologies, also known as Oxitec. Founded by Hadyn Parry in 2002, Oxitec is pioneering a sustainable and environmentally-conscious method of eradicating mosquito-borne illnesses.

But instead of focusing on vaccinations for dengue, Zika, and other virus strains, Oxitec is focusing on the delivery method of these terrible diseases — the mosquitoes themselves.

What better way to do that than to release thousands of weaponized mutant mosquitoes into the wild to breed?

♫ Do a little dance. Make a little love. Get down tonight. ♫ GIF cia thegatesnotes/YouTube.

(That's what I call 'em, anyway. The folks at Oxitec call them OX513A, which is decidedly less catchy.)

As it turns out, there are more than 3,500 known species of mosquitoes on the planet, but only two of them — the Aedes aegypti and the Aedes albopictus — actually feed on human blood. And of those species, the females are the ones that actually do the biting, occasionally passing along some fatal viruses in the process.

That's why the clever folks at Oxitec found a way to breed scientifically-modified male mosquitoes whose sole purpose is weaponized reproduction.

These lab-grown suckers have an altered gene that, without the antidote that's readily available in the Oxitec hatchery, will ultimately cause the bugs to break down and die.

This doesn't happen immediately of course. And once the infected mosquitoes are released into the world, they still follow their natural impulse to seek out the nearest female, do the midair humpty dance, and fertilize her eggs — both sides blissfully unaware that he just passed on that same self-destructive protein.

The unsuspecting larval mosquito babies are dead before they hatch, and whammo-blammo, problem solved!

That's what you get, ya little plague-bringin' creep! GIF from thegatesnotes/YouTube.

So if all it takes are a couple thousand mutant mosquitoes, then what's up with this Zika virus outbreak?

Specifically, they're warning anyone who is carrying, or is planning to carry, a baby to stay far, far away from South America and the Caribbean, where the Zika virus has been linked to a sudden meteoric increase in microcephaly — that is, children born with abnormally small heads, which can lead to lots of other problems and can severely affect brain development.

In the 70 years or so since the virus was first discovered in the Ugandan jungle, the number of people affected by Zika was originally pretty small — somewhere around a hundred people, ever.

But that all changed in the last few years. And like the spread of West Nile and dengue fever before it, there is no vaccine currently available to prevent the spread of Zika — and it could take a while before anyone figures one out.

So, in the meantime, why not eradicate the virus at its source, before it has a chance to spread?

"Who, me? What? I didn't do anything. I'm just gonna go over here now..." GIF from thegatesnotes/Youtube

As it turns out, people aren't so keen on swarms of Sexytime Frankenstein Death Mosquitoes invading their communities.

After all, what happens if a female mosquito gets infected with this self-destructing protein and passes it on to a human before she dies? What happens if evolution and radical conditions eventually transform these weaponized genocidal mutant mosquitoes into, well, something worse? What kind of unforeseen damage will occur in the local ecosystem if neither of the human-biting mosquito species are present to fulfill their crucial ecological functions?

To that last point, the answer is "almost certainly none." Yes, mosquitoes can assist in the spread of pollens, and they serve as meals for certain animals. But for the most part, they're selfish self-sustaining death machines designed to breed and kill.

The rest of those questions, however, are totally valid.

Mosquitoes are basically the real-world equivalent of the xenomorph from "Aliens" (which is also where this GIF is from).

Unfortunately, those same concerns have also made it difficult for Oxitec to conduct the tests they would need to in order to produce satisfactory answers. The few controlled experiments they have conducted in Brazil and the Cayman Islands have both resulted in 80% reductions in the populations of disease-carrying mosquitoes in just a few months.

While the science fiction fan in me is still terrified of the consequences, the rational human in me understands the math.

Eliminating 80% of the mosquitoes that deliver these diseases could save nearly half a million lives every year.

So what are we waiting for?