Ready for Trump's 'Friday News Dump'? This organization is already one step ahead. 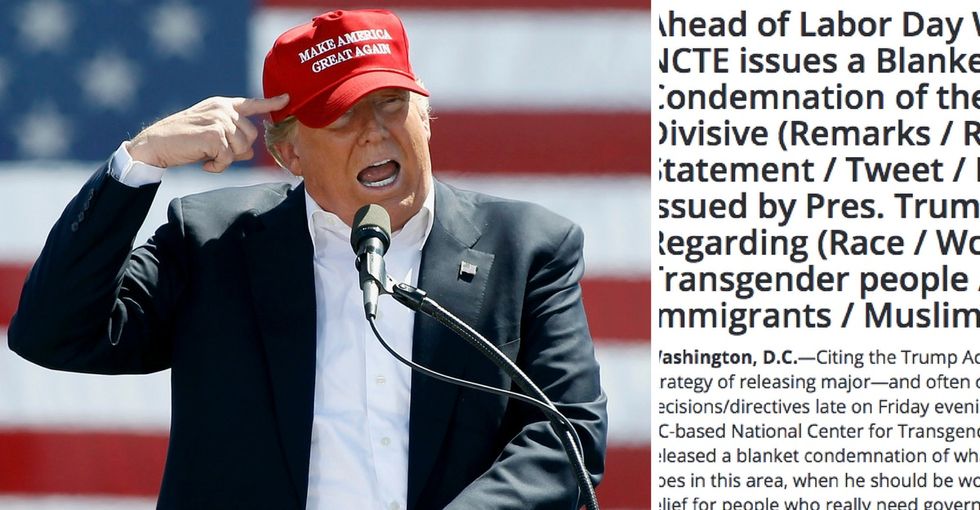 It's become a bit of a joke that things are actually getting kind of predictable at this point in the Trump presidency — at least when it comes to Fridays.

On the first Friday after taking office, Donald Trump announced new restrictions on travel from seven majority-Muslim countries. On Friday, April 14, the White House announced plans to keep its visitor logs secret. On Friday, Aug. 25, Trump pardoned Joe Arpaio, the notorious former sheriff of Arizona's Maricopa County, and made his plans to ban transgender people from serving in the military official. Now, on a Friday going into a long Labor Day weekend, rumors are swirling that Trump may put an end to to President Barack Obama's Deferred Action for Childhood Arrivals program.

To be sure, the "Friday news dump" long predates the Trump White House. Still, it's remarkable how much truly concerning news has been packed into a single day of the week during the president's first months in office.

Knowing that bad news is always just around the corner on Fridays, the National Center for Transgender Equality did something genius to save themselves some time at the end of the week.

They turned their statement of condemnation into a Mad Libs-style form letter, that allows whoever receives it to quickly fill in the blanks and generate a pre-emptive response to the president's latest announcement.

"Citing the Trump Administration’s strategy of releasing major — and often offensive — policy decisions/directives late on Friday evenings, the Washington, DC-based National Center for Transgender Equality has released a blanket condemnation of whatever the President does in this area, when he should be working on disaster relief for people who really need government attention, ahead of Labor Day weekend," it reads before quoting executive director Mara Keisling:

“Whether releasing major guidance to purge transgender service members, pardoning a notorious racist and civil rights violator or the tacit endorsement of Nazism in America, NCTE wants to get ahead of the White House for yet another pre-weekend news dump that will likely hurt good people. To be clear, we truly hope the President focuses on emergency relief in the wake of Hurricane Harvey and other pressing issues affecting the lives of millions of Americans.

By condemning the President’s inevitably divisive rhetoric/action in advance, however, we hope to provide a sobering counterpoint to this Administration’s discriminatory agenda and prevent their actions from being buried among this weekend’s news coverage.

By releasing this unorthodox statement sufficiently ahead of the weekend, news outlets won’t need to scramble to find expert commentary and guests to respond to the latest, outrageous tweet/statement/directive from the White House this weekend. The news media should know that whichever mean-spirited, and no doubt poisonous, plan/move the President announces/enacts this weekend, odds are high that NCTE and most Americans will be against it.”


Yes, the release is a bit troll-y, but NCTE hopes people will see past that to the larger issues at play.

The group, which when contacted by e-mail, claims to have "led or participated in 165 victories over the past decade," uses a variety of tools in fighting for the broader goal of equality for trans people and those at the intersection of marginalized groups.

"We wanted to call out the Administration’s pattern for what it is, and to shed light on this practice (which, if we’re being honest, has been used by many Administrations)," Keisling said in an e-mail. "But also to stir the news media not to fall for such an obvious ploy week after week. The spectacle isn’t the story, it’s the impact of such policies."

There's also a (perhaps unintentional) message that can be gleaned from this statement about the importance of not becoming desensitized to presidential chaos.

In the administration's early days, reminders that "this is not normal" and pleas against "normalizing" Trump spread far and wide. With so many important issues at stake, ranging from personal freedoms all the way to the future of the planet, it's easy to hit a point where you're burned out from being constantly engaged in activism. Burn out is a path to desensitization.

Believe it or not, there are still people who think that Trump is an LGBTQ ally because of the one time he held a flag (upside down) at a rally, ignoring his destructive policies. Photo by Chip Somodevilla/Getty Images.

The truth is that we all need breaks, even the superheroes out there trying to save the world. Earlier this year, psychologist Alessandra Pigni published a guide to the "ABCs" of burnout prevention that's definitely worth a read. So rest up, relax, and recharge this weekend if you're able to. The battles are long, and it's in everyone's best interest to take the occasional breather.

So whatever "inevitably divisive (remarks / release / statement / tweet / policy)" Trump issues over this weekend or any, make note of it, but remember to take care of yourself as well.

Like the rest of the Western hemisphere, I woke up this morning to the surprising news that gymnastic superstar Simone Biles had backed out of the Olympic team finals after an uncharacteristically bad vault performance. After some conflicting reports about a possible injury, it became clear that she was physically fine—it was her mental state that had gotten twisted.

Cue the armchair commentators complaining that she had let the team down, that she's only concerned about herself, and that she shouldn't have gone into the competition if she didn't have the mental toughness to handle it.

Hoo boy. Let's all just take a deep breath and step back for a second.