One man's story about loving someone with an incurable disease. 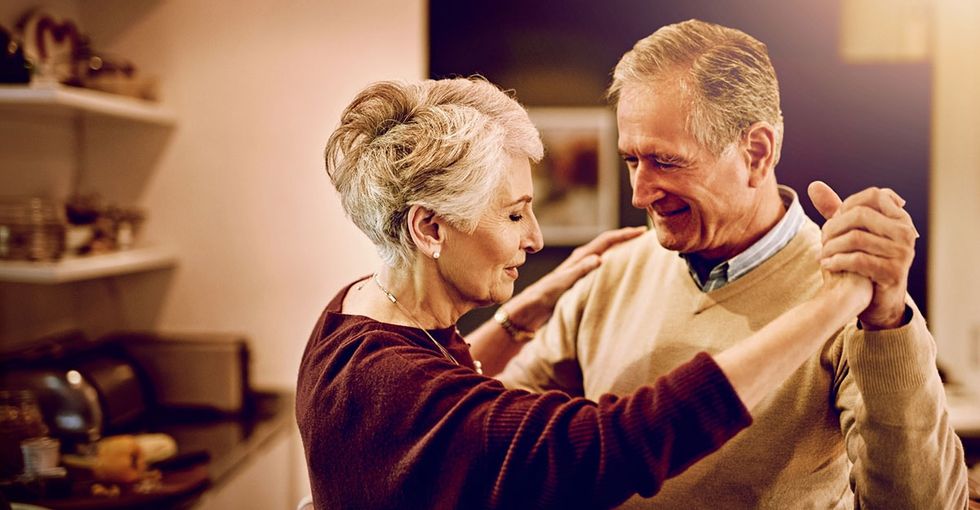 Before she was diagnosed with multiple sclerosis, Rosanna loved to dance.

"Rosanna can dance to all kinds of music. Cha-cha, merengue, salsa, bolero, you name it," he laughs. "Now she dances in the car, sitting down. We pull up to a stop sign, and I say, 'Easy, girl!'"

Andy and Rosanna have been married for 38 years. Prior to her diagnosis, Rosanna was an executive secretary, the mother of two young boys, an avid chef, and a skilled dancer. Andy traveled often for work but always made time to see his sons' soccer games, jazz concerts, and marching band competitions at home in south Florida. Their family lived an active, busy, happy life. "It was happy moments," says Andy.

Then, two decades into their marriage, Rosanna was diagnosed with multiple sclerosis (MS). She was suddenly forced to contend with an unfamiliar, painful, debilitating disease. And Andy had to figure out how to play his role as her husband, caretaker, and lifeline.

"The past 18 years has been like a small roller coaster," says Andy. "It was very, very tough for both of us."

When Rosanna was diagnosed, neither she nor Andy knew what to expect. She became fatigued, began falling down, and experienced migraines. Together they read articles and went to different doctors. Andy drove them to her various appointments. "To Miami, it's about 65 miles, and she can't drive on the highway due to her MS symptoms. I took over driving to the doctor's office a long time ago," he says.

Eventually Rosanna found a routine that worked for her, and they settled into learning to live with, and trying to reduce, her MS relapses. But Rosanna had to leave her job to apply for disability — an application that would take over seven years to get approved. Andy had to leave his job, too.

"I gave up my job to be with her," Andy says. "I was traveling two, three days a week, and I was leaving her alone. I didn’t like that at all." He took a more stationary job and along with it the challenge of supporting his family and putting his older son through college while learning to help his wife live with MS.

Rosanna and Andy take on the challenges that life brings together. Image via Andy, used with permission.

An often overlooked element to a chronic condition like MS is how difficult it can be for loved ones to learn how to support someone who has it.

It's incredibly important for caregivers to make time to care for themselves — something that many people struggle with because it makes them feel selfish. But it's necessary.

For Andy, self-care comes in the form of his bike. "I've been riding a bicycle for the last 30 years. My relaxing time is riding my 30 miles. It takes my mind away from everything." It's even given him an opportunity to connect with and contribute to the MS community by participating in rides that raise funds for research.

Image via Andy, used with permission.

He and his wife also go to "CHATS," which are live events hosted by MS LifeLines (a patient support service), where they talk to others both in and out of the MS community about their experience living with the disease. "I enjoy it very much because there's MS patients we know and those we don't," Andy says.

Telling their story helps them connect with the community and make friends who can relate to their experience. In addition to "CHATS," MS LifeLines provides an online resource called My Story, where people affected by MS can share their stories and read the stories of others going through a similar situation.

The #1 key to balancing it all, says Andy, is teamwork.

It can be hard to strike a balance of caring enough and caring too much. "At first, Rosanna was afraid to tell anybody what she had because she didn’t want to worry them," Andy says.

But with time and practice, they've found a balance that works for them. "I care for the house. I help her with the dishes," he says. Rosanna wanted to keep cooking for her husband, but with MS, that isn't always possible. "So I make dinner and she makes lunch," Andy says. "We work together as a team. That's the only way that you can help each other. I help her and she helps me."

At the end of the day, the best way to love someone with MS is by simply being a good partner.

MS causes all sorts of difficulties that fluctuate from day to day. "One day she’s in a bad mood, and I've got to deal with it," says Andy. "But I have bad moods, too. That's marriage, isn’t it?"