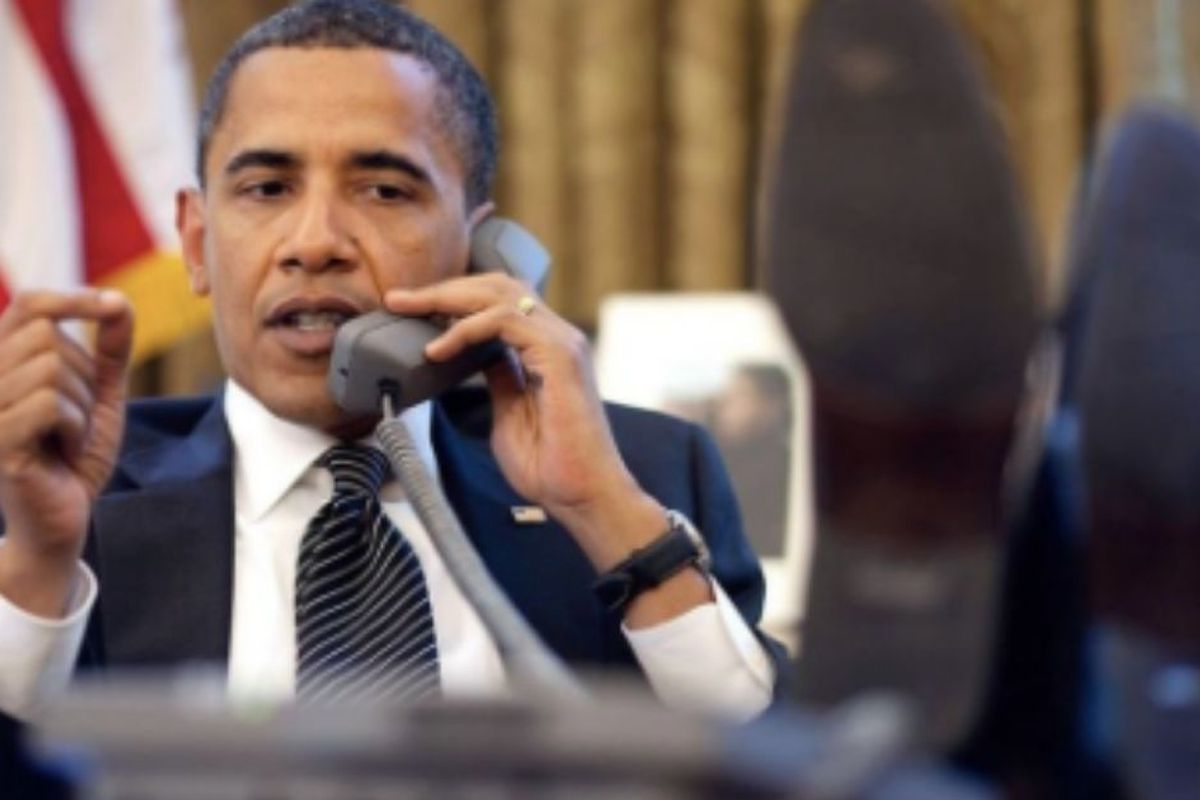 On May 11, 2020, a reporter from the Washington Post asked President Trump:

"Mr. President, in one of your Mother's Day tweets you appear to accuse President Obama of 'the biggest political crime in American history by far.' Those were your words. What crime exactly are you accusing President Obama of committing, and do you believe the Justice Department should prosecute him?"

President Trump answered with the most tremendous non-answer in the history of non-answers:

"Obamagate. It's been going on for a long time. It's been going on from before I even got elected. And it's a disgrace that it happened. And if you look at what's gone on, and if you look at now, all of this information that's being released. And from what I understand, that's only the beginning. Some terrible things happened, and it should never be allowed to happen in our country again.

And you'll be seeing what's going on over the next — over the coming weeks. But I — and I wish you'd write honestly about it, but unfortunately, you choose not to do so."

Miraculously unfazed by this response, the reporter asked again: "What is the crime exactly that you're accusing him of?"

Trump refused to say what Obama did wrong, saying only, "You know what the crime is. The crime is very obvious to everybody. All you have to do is read the newspapers—except yours."

Take that, lamestream media! How dare a reporter ask the president questions? It's only his job. And why would you expect the president to directly answer a question about something as mundane as accusing a former president of committing the worst political crime in history?

Clearly, if you're a sitting president and you believe your predecessor committed a serious crime, a Tweet on Mother's Day is exactly the place and time to announce it. Not.

And why would Trump have to even know that the crime is? We have thousands of conspiracy theory-pushing minions and Russian bots and ranting YouTubers to take care of those pesky details. Duh.

Besides, we don't need an answer. We have ample photographic evidence of the heinous crimes Obama committed while he sat in the Oval Office. In fact, his own White House photographer has leaked a bunch of them on Instagram. (Thank goodness for social media or we'd never know what's true!)

Pete Souza shared two collections of photos that are so damning you might want to sit down before you look at them.

Pete Souza’s Instagram profile post: “So many crimes.⁣ ⁣ I fully expect to be subpoenaed by the Attorney General.⁣ ⁣ ⁣”

Reaching over a glass shield at Chipotle? HE'S the one responsible for the spread of this pandemic, isn't he? I bet he had the novel coronavirus dripping off of that finger. #ThanksObama

Feet on the desk? How dare he?!

He used a selfie stick, people. A SELFIE STICK. It's unprecedented. How is anyone okay with this? Wake up, America!

And this hat? This hat is A CRIME THAT SPEAKS FOR ITSELF.

And just look at how sneaky he is. Did he not think we were going to notice him holding his wife's hand? Does he think we're all a bunch of gullible sheep? We can see the truth with our own eyes. WHAT ARE YOU TRYING TO HIDE HERE?

That's not even the half of it.

Pete Souza on Instagram: “The crimes never end.⁣ ⁣ And I was a witness to all of them.⁣ ⁣ ⁣ ⁣”

Sitting on a desk? So immature and unpresidential. Thank goodness he's not around to embarrass the nation and sully the office of the presidency with his press briefing meltdowns, Twitter tantrums, and cyberbullying anymore.

And look at him riding a bike without a helmet. Why does he think he's above the law?

Even when he did wear a helmet, he wore belted khaki shorts with socks and soccer slip-ons, which has to be illegal.

These dad jeans—who does Obama think he is?

But this right here, this is the final straw. A tan suit? Does he think that just because he's finer than fine, he can get away with whatever he wants? No. The American people will not stand for this affront to the rule of law.

If you swipe through the Instagram collections and view all of the evidence with an open mind, there's no way you can say that the man doesn't deserve hard jail time. He and everyone who was conspired with him in these outrageous crimes should be locked up.

Thank you for revealing the truth at the heart of Obamagate, Pete Souza. America deserves it.