Nearly 80 years ago, the Battle of the Overpass was a national PR disaster for Ford Motor Company. 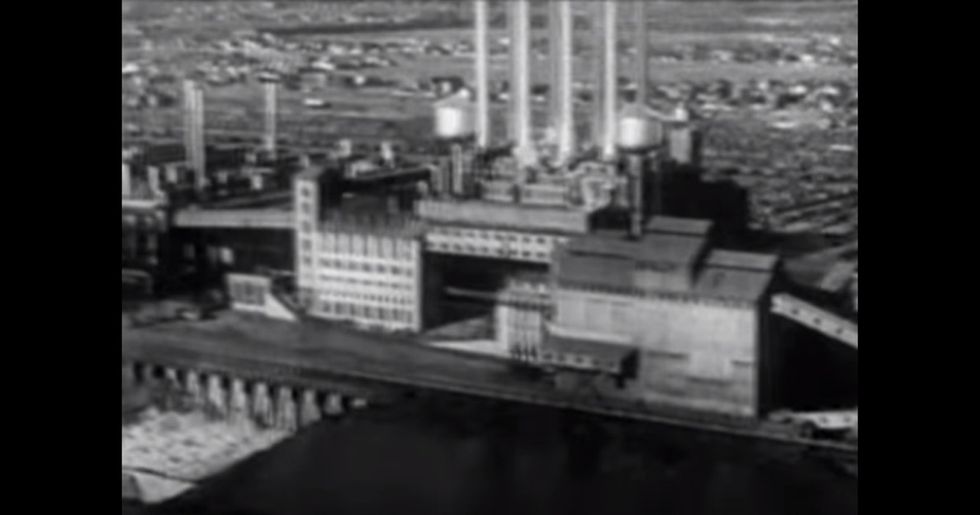 Things were white-hot in and around Detroit in 1937 when it came to unionizing auto workers.

The National Labor Relations Act, just established in 1935, gave workers a lot more rights when it came to organizing, and it included the right to distribute information at the gates of factories to get out the truth about what it meant to join a union and gain workers' rights.

The United Auto Workers had had some big successes at Chrysler and General Motors and was gaining ground with Ford, but the latter company fought hard against letting the union in.

One of the key events that turned the tide has been known ever since as The Battle of the Overpass, at Ford's massive River Rouge plant in Dearborn, Michigan.

On May 26, 1937, the UAW decided to take action with an informational flyer and newsletter campaign talking about the newly-won rights under the NLRA as well as a campaign to raise wages from $6 for an 8-hour work day ($99 in today's dollars) to $8 for a 6-hour day ($132 today).

Sure, they were shooting high, but it was designed to get attention — and to get Ford talking. The River Rouge plant, one of the largest of its kind in the world, had 9,000 workers that the UAW wanted to reach.

After many workers took the flyers that the roughly 40 organizers had been passing out all day long, UAW organizers Walter Reuther, Richard Frankensteen, and two more gathered on the pedestrian overpass over Miller Road at gate 4 of the plant for photos by Detroit News photographer James R. "Scotty" Kilpatrick. The Ford logo was behind them, which is why they chose that spot.

It was a fateful decision.

Private security guards from Ford came out (some estimates were as high as 40) and attacked them.

"Just look at the smiles on their ... OWWW! STOP THAT!" Image by James Kilpatrick/Detroit News via U.S. National Archives and Records Administration.

The organizers were beat, kicked, thrown down stairs (breaking the back of one of the men), and slammed into the ground.

The photographer was also accosted by the guards, who demanded he turn over the photographic plates to them so they could be destroyed. In a brilliant move, he hid the actual plates under the seat of his car and gave them blanks.

This turned out to be a crucial decision. After the battle was over, Ford immediately began to spin the incident to make itself look like the victim.

The head of security for Ford, Harry Bennett, told Time magazine that the "affair was deliberately provoked by union officials ... they simply wanted to provoke a charge of Ford brutality. ... I know definitely no Ford service man or plant police were involved in any way in the fight."

But as soon as Kilpatrick's photographs were developed, they hit the presses, and the tide turned quickly when newspapers all over the country featured the brutality of Ford's hired goons. Public opinion was firmly on the side of the workers.

In fact, when Henry Ford's lawyers and Bennett were called in front of the newly-established National Labor Relations Board on violating the National Labor Relations Act in dozens of ways, members of the press — such as Kilpatrick — gave the most damning evidence along with Ford workers who testified that if anybody who worked in the belly of the Ford beast expressed an interest at all in unionizing, they were fired immediately and escorted out of the plant.

All of this happened in 1937, and Henry Ford finally realized he had to recognize the union and negotiate a contract.

Walter Reuther (left), future president of the UAW, and organizer Richard Frankensteen are shown immediately after the attack. By the look in Walter's eyes, it seems he had a heart of gold. Image via Walter P. Reuther Library.

The combined one-two punch of the publicity around the Battle of the Overpass and the National Labor Relations Board hearings gave Ford no alternative.

The UAW went on to help create good union jobs and, eventually, help millions of people achieve a middle-class income with health insurance and pensions as well.

What can we learn from this?

In 1937, these workers fought for an increase in wages to make better lives for their families and their communities. They gave their blood, and sometimes their very lives, in order to make sure future generations had it better than they did.

We're at a turning point in this country. Unions now represent a historically low number of working people while income inequality is at one of the most extreme levels ever. These two facts are related.

It's time we rebuilt the labor movement and turned it into the force for good jobs that it once was.

BONUS! Get into the spirit of the times with this retro clip of a bird's-eye view of the enormity of the Ford River Rouge plant in 1937, complete with florid voice-over worthy of William Shatner.

For more, check the Walter P. Reuther Library at Wayne State University. Also, if you ever get to Michigan, UAW Local 600 has a collection of photos about the Battle of the Overpass as well as the 1932 Ford Hunger March.