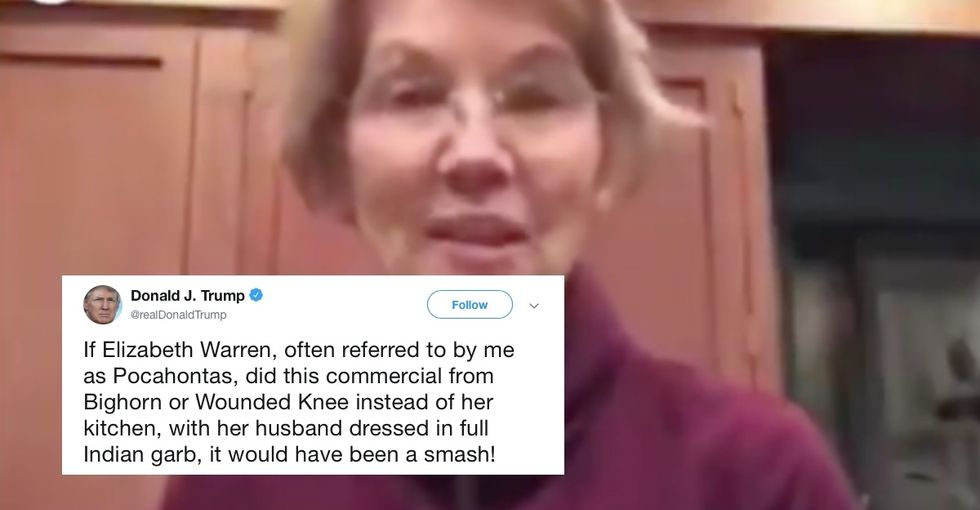 At this point, it should be painfully obvious that you shouldn't use the tragic history of Native peoples as a weapon to attack your political enemies. And yet, here we are.

On January 13, 2019, President Trump shared a clip from an Instagram Live video of Elizabeth Warren, in which she grabs a beer and thanks her husband after announcing that she's running for president in 2020. Trump commented, "If Elizabeth Warren, often referred to by me as Pocahontas, did this commercial from Bighorn or Wounded Knee instead of her kitchen, with her husband dressed in full Indian garb, it would have been a smash!"

If Elizabeth Warren, often referred to by me as Pocahontas, did this commercial from Bighorn or Wounded Knee instea… https://t.co/iBFJ5jsr2F
— Donald J. Trump (@Donald J. Trump) 1547434379.0

For those who may not know, Wounded Knee was the site of a massacre in which U.S. soldiers slaughtered 150-300 Native Americans, nearly half of them women and children. And the Battle of Little Bighorn, though a momentary victory for Native Americans, is still a painful reminder of the oppression of the indigenous people of America, which only became more intense after the event.

The largest and oldest American Indian and Native Alaskan organization in the country has denounced Trump's tweet.

The National Congress of American Indians is "the oldest, largest, and most representative American Indian and Alaska Native organization in the country," and those who lead the NCAI had some words for the president after his tweet.

NCAI President Jefferson Keep said on behalf of the organization:

“We condemn in the strongest possible terms the casual and callous use of these events as part of a political attack. Hundreds of Lakota, Cheyenne, and Arapaho people lost their lives at the hands of the invading U.S. Army during these events, and their memories should not be desecrated as a rhetorical punch line.”

“The President referenced the Wounded Knee Massacre, one of the darkest and most tragic chapters in the history of the Sioux Nation, to mock Senator Warren. On behalf of the Rosebud Sioux Tribe, I condemn President Trump’s racist and disrespectful tweet about this brutal incident, in which an estimated 300 unarmed men, women, and children were rounded up and slaughtered. President Trump should remember that the United States has broken and continues to dishonor the treaties of peace made with our nation and other tribal nations of this country, and he should apologize immediately to the people of the Rosebud Sioux Tribe and other Lakota, Dakota, and Nakota nations for his shameful and ignorant misstatement.”

Others have called out the president's insensitive and callous remarks as well.

The Standing Rock Sioux Tribe called him out, saying "It is disgraceful that a President is mocking a massacre that hurt our Lakota People. We are outraged by his ignorance and lack of propriety."

Other folks on Twitter, Native and non-Native, have pointed out the egregiously offensive nature of this official presidential statement. (As a reminder, all of Trump's tweets, including this one, have been ruled by a court as official statements and will go down on the historical record.)

Trump's tweet is indefensible. The fact that he has not acknowledged that fact or deleted it with a profound apology isn't surprising—but it should be. We should be shocked by this kind of behavior out of the President of the United States. The fact that it's barely made a blip on most people's radars is a clear sign of how far our standards have fallen.

The Sam Vimes "Boots" Theory of Socioeconomic Unfairness explains one way the rich get richer.

Any time conversations about wealth and poverty come up, people inevitably start talking about boots.

The standard phrase that comes up is "pull yourself up by your bootstraps," which is usually shorthand for "work harder and don't ask for or expect help." (The fact that the phrase was originally used sarcastically because pulling oneself up by one's bootstraps is literally, physically impossible is rarely acknowledged, but c'est la vie.) The idea that people who build wealth do so because they individually work harder than poor people is baked into the American consciousness and wrapped up in the ideal of the American dream.

A different take on boots and building wealth, however, paints a more accurate picture of what it takes to get out of poverty.

This week's roundup of delightful finds from around the internet.

So, I've been pulling together these weekly roundups of goodness for several months, and I've noticed some common themes emerging in the things that tend to bring us joy:

3. Older folks. Our elders have much to teach us about embracing life.

Practically every "10 things that made us smile this week" post so far has been dominated by these categories, with zero intention for that to be the case. And this week's list is no exception. Animals, kids, elders and arts. That appears to be where most of our small daily joys can be found.

In 125 years, millions of people have looked at this painting. No one really saw it until recently.