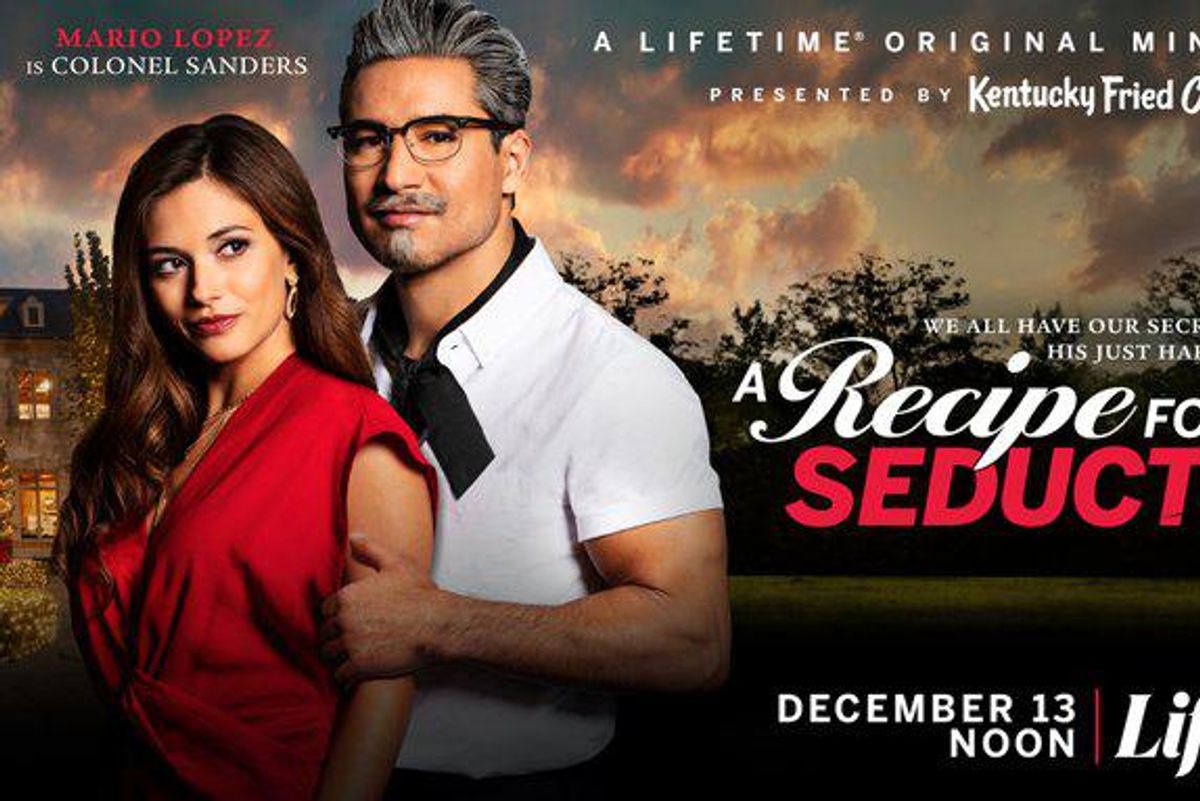 At this point it seems like the best choice is to fully lean into the absurdity of everything as we claw our way out of the weirdest, if not the worst, year in recent memory. And from that perspective, Lifetime's new Kentucky Fried Chicken mini-movie—yep, you read that right—totally fits the bill.

I mean, Mario Lopez playing a sexy Colonel Sanders in a murderous love triangle romance thriller plot seems right on schedule, doesn't it? We did the whole "Tiger King" thing early in the pandemic, so it's high time for another "What did I just watch?" guilty pleasure.

Lifetime's "A Recipe for Seduction" is clearly a marketing ploy for KFC, but who cares. The trailer is deliciously wonderful and horrible, leaving me unable to look away long enough to roll my eyes at its ridiculousness. Like, I don't want to admit that I actually want to watch this because I'm not a fan of humiliation, but at the same, I totally want to watch this.

I mean, come on. Watch this trailer and tell me you know exactly how to feel about it. You can't. Because psychology or something.

So, the first issue is that Colonel Sanders is hot. How is that even a thing? Thanks for ruining my childhood. My second issue is that I want to know how this turns out. It's only a 15-minute mini-movie, so it can't be that complicated of a plot. And again, how is this even a thing?

The part that really cracked me up though, was the "Premieres December 13th at noon" part. At noon? Really? What kind of production makes a premiere at noon, for gracious sakes?

The "brought to you by Kentucky Fried Chicken" kind, apparently.

I would love to have been a fly on the wall at the marketing meetings where these mini-movie ideas came to fruition. Like, how did those conversations go? Was it just a bunch of goofy creative types talking about how they could make the silliest branded content ever, but not make it overtly silly, but still somehow make it overtly silly? And how did the filming of it go? The production quality is way up there. It probably took hundreds of people to make this "film." Did they die laughing between takes? Was it just another job for them? Did they weep over what had become of their careers?

I mean, it looks like a soap opera mixed with a feature film mixed with an advertisement mixed with a parody. It's either totally genius or totally not. I genuinely don't know what to think or how to feel.

Maybe that's what this movie/ad/monstrosity/delight is designed to do. Maybe it's an emotional biproduct of this wonky, absurd year. I don't know. All I know is that I'm going to pretend that I'm not going to watch it but will totally watch it when it comes out on December 13th. At noon. Brought to me by Kentucky Fried Chicken.

Mark your calendars because Lifetime and @KFC have partnered for a Lifetime Original Mini-Movie you don't want to m… https://t.co/RnbpgBW9LO
— Lifetime (@Lifetime)1607349600.0