Kid President 'upgrades' a school in his hometown, and it's a message for us all.

Students at Lincoln Magnet School for Mathematics and Science in Jackson, Tennessee, had a surprise this week. 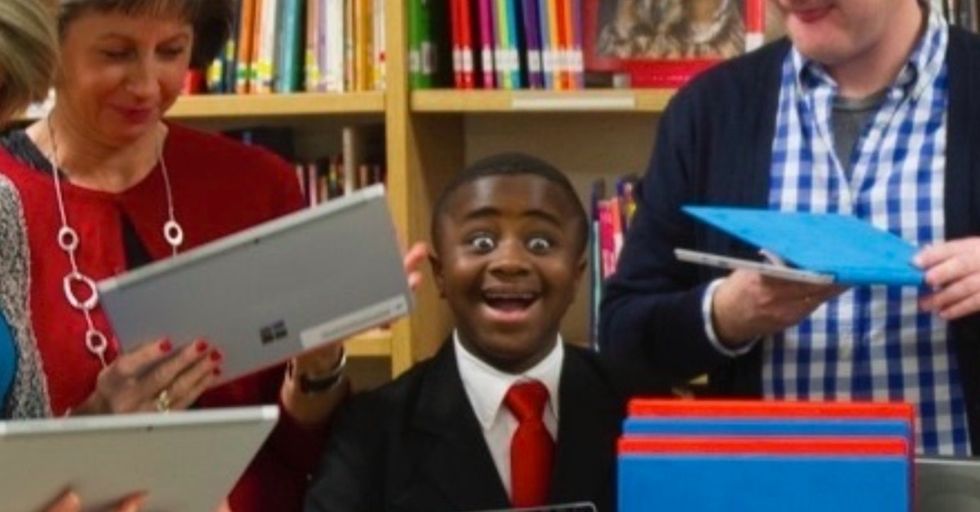 If we want to make the world a better place, we can take a cue from Kid President.

Kid President (aka 11-year-old Robby Novak) has had an awesome and busy year: He made a lot of videos, wrote a book, and even met the president of the United States himself.

After all that, he totally deserves a vacation. Bye, Kid President, see you in the spring!

Just kidding! There's something he needs to check off his list before he goes. And Mr. President has a plan.

Kid President wants to upgrade the world, and he needs your help.

You know how before you leave on vacation, there's a laundry list of things to do before you can hop on that plane and truly enjoy yourself? He has one too.

Before he leaves on vacation, he just has to do one little thing: upgrade the world. Going through his fan mail, he sees a question. A fan wants to help do some good in the world but doesn't know where to start.

Kid President has a few ideas:

Did you notice how that box got smaller and smaller and then was finally checked off? Nice work, Mr. President!

Kid President decided to take his own advice and upgrade his world in a real way — with a donation to a school in his home state of Tennessee.

Students at Lincoln Magnet School for Mathematics and Science in Jackson, Tennessee, had a surprise this week: a visit from Kid President himself.

With the help of Microsoft, Kid President donated 20 Microsoft Surface 3 tablets to the school — as well as 20 copies of his book, "Kid President's Guide to Being Awesome."

And it all came in this fancy cart! Image via Microsoft.

Robby lives with his family in Tennessee's Chester County, and he told The Jackson Sun that he wanted to give back to a school in his own backyard.

The Surface tablets will help students at the school with everything from reading PDFs and digital textbooks to taking notes and doing homework from the cloud.

"The thing that was exciting to me was the idea of a second-grade student or first-grade student here holding one of these devices and feeling empowered and feeling that somebody believed in them and that they could do anything," Montague told The Jackson Sun.

This donation is part of Windows' year-long "Upgrade Your World" initiative to celebrate those who inspire and empower others.

Windows is using its "Upgrade Your World" initiative to bring $10 million to 110 nonprofits tackling a range of issues and opportunities, like the Special Olympics, Pencils of Promise, and Code.org.

Interested in being a part of this? Check out how other organizations are upgrading their communities and see how Windows 10 can help.