Jon Stewart's best moment wasn't on 'The Daily Show.' It was the day he eviscerated CNN.

"See, the thing is, we need your help. Right now, you're helping the politicians..." 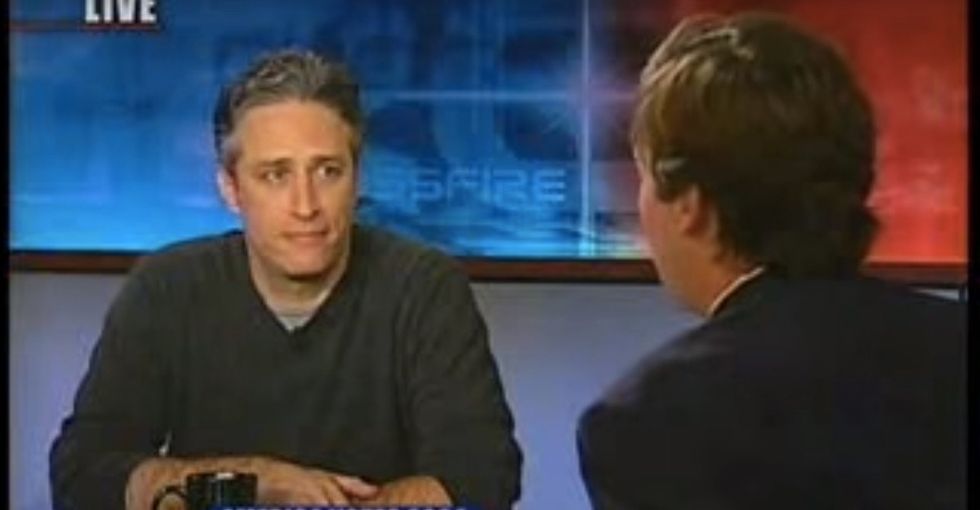 Jon Stewart changed the way I think about TV news.

He's always been a hero of mine. As he finishes his last week at Comedy Central, I wanted to reflect on the moment he opened my eyes to the way the world really works.

The most important thing he ever taught me wasn't on "The Daily Show."

It was on another show entirely. A horrible show. A show that represented everything wrong with our country's political discourse. The show that was the precursor to all the worst things on cable news today.

It was the CNN show "Crossfire."

All GIFs via CNN's "Crossfire."

"Crossfire," a debate show where partisan hacks yelled past each other, was and is the epitome of everything wrong with cable news shows. But it was basically every other cable news show, just on steroids.

Prior to Stewart's appearance on "Crossfire," I had a pretty simplistic view of politics. My guys were good, their guys were bad, and there was nothing in between. Everything was their fault. Their side was lying to hurt America.

Jon Stewart helped me realize how wrong I was.

Stewart had a history of making fun of "Crossfire," as he did with all irresponsible television masquerading as journalism on every single TV network.

So when the guys at "Crossfire," Tucker Carlson and Paul Begala, invited him to be on their show, Stewart seized the opportunity. And I grabbed my bowl of popcorn, sat back on my couch, and watched, transfixed.

What followed was 14 glorious minutes of television that eloquently expressed everything that had been in my head about the TV media (see "Crossfire," above) that I hadn't yet been able to express coherently.

For 14 minutes, Stewart held the media accountable for not holding politicians and corporations accountable.

You know how the pundits on these shows yell shrill talking points at each other, respond to questions people didn't ask, and ignore each other, and then the host goes to commercial without fact-checking anyone?

Otherwise known as "every cable news show ever." Politicians count on that.

Stewart pulled back the curtain for the viewers while pulling the rug out from under the hosts of the show.

Stewart shone a big 'ol spotlight on a problem with the media that hadn't been addressed so directly before: TV media works under the concept of "fairness," he argued, meaning these networks give both sides of an issue equal time regardless of the validity of those positions or their level of expertise or authority on a subject.

And Stewart, like myself and millions of other Americans, was just plain sick of it.

And throughout the segment, he reiterated a phrase that sticks in my brain even to this day:

Then a miracle happened. The best part of this whole story?

It happened a few months later. On Jan. 5, 2005, a couple months after Stewart's "Crossfire" appearance aired, the show was cancelled.

And there was much rejoicing — specifically in my living room, where I probably did some sort of awkward victory dance.

The NY Times reported that then-CNN President Jonathan Klein said its cancellation was in part due to Stewart's appearance.

"Mr. Klein specifically cited the criticism that the comedian Jon Stewart leveled at 'Crossfire' when he was a guest on the program during the presidential campaign. Mr. Stewart said that ranting partisan political shows on cable were 'hurting America.'

Disappointingly, CNN's president didn't agree as much as he originally implied. CNN brought back "Crossfire" again. And then cancelled it, thankfully, again. But its spirit lives on in every mediocre, divisive 24-hour news cycle.

Here's the thing. Cable news shouldn't be dividing us.

Jon Stewart's appearance on "Crossfire" clearly explained that the media should be informing us and holding the people in power accountable.

All this time, I had been blaming the other side for our problems. But the reality is they wouldn't be getting away with it if our media were functional.

I can't blame the foxes for eating the chickens they guard in the henhouse when the media has a responsibility to make sure they don't work there in the first place.

Every news network does it. CNN isn't the only guilty party. Fox News does it. MSNBC does it.

Even today, every network lets their panelists say what they want without consequences. In the name of "balance."

So how should cable news hosts do their jobs?

Or do you want the host to say: "Actually, that is factually incorrect. You both are either lying or misinformed. I won't be bringing you back on my show if you mislead people again."

Jon Stewart opened my eyes. We don't need to get rid of the media. We need the media to their job.

Jon Stewart made me realize that the divide between most Americans is a false one.

Letting these pundits speak for us, allowing them to pigeonhole all of us as "left" or "right," should not be allowed to happen. All of us have shades of gray.

It's a media-created cartoon, meant to keep us fighting among ourselves while the folks upstairs get away with whatever they want.

We're better than that. And until we hold the media accountable, the media won't hold anyone else accountable.

Thank you for 15 great years, Jon. I know you don't think you eviscerated anything and that you didn't make a difference, but you did. Thank you for forcing the media to occasionally do something right. Thank you for being the voice of reason and sanity that we all needed.