John Oliver digs into the low-cost, child labor hypocrisy in the fashion industry. 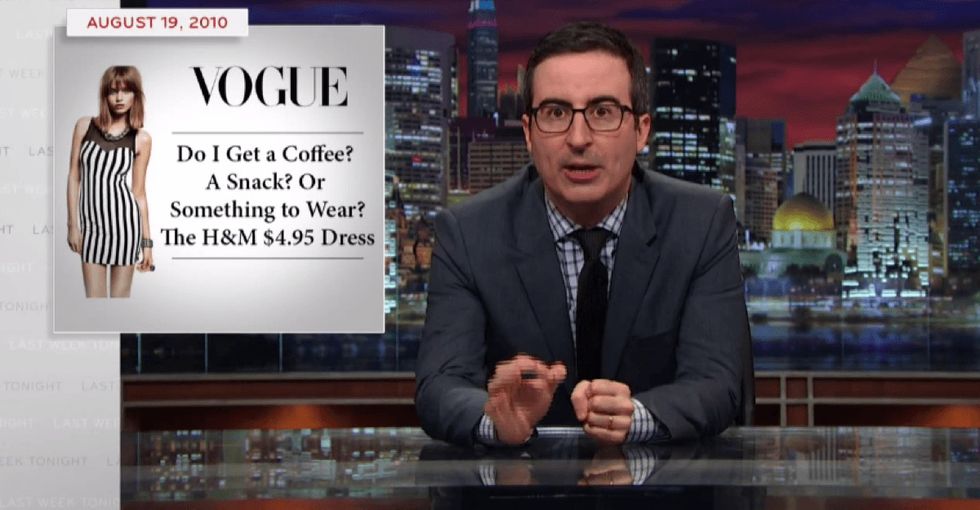 On "Last Week Tonight," John Oliver took a look at the long history of child labor in the fashion industry.

The use of sweatshops and child labor in clothes manufacturing has long been out of style.

As illustrated in this political cartoon from 1870, it's been associated with nasty, dehumanizing working conditions, health risks, and exploitation.

It's a modern problem made worse by plunging prices in the fashion industry.

Sure, companies do what they can to say they're against the use of child labor, but the current deal-driven state of the fashion industry makes it so there's really no alternative.

I mean, how else do you think the $15 dress came into existence?

It used to be that the use of child labor was enough to really rattle a company. Take for example, Kathie Lee Gifford.

In the mid-'90s, it came out that Gifford's clothing line was being produced in Honduras by 13- and 14-year-olds.

As one might expect, Kathie Lee became the target of protests.

She even testified on the issue in front of Congress.

Within a couple of years, Gifford was out the door at "Live with Regis and Kathie Lee," and was never heard from again...

...unless you count the millions of people who tune in to see her on "Today."

Ah, yeah that. Okay, so maybe the sweatshop scandal didn't destroy her career after all.

See? It all comes full circle.

On "Last Week Tonight," host John Oliver skewered the fashion industry for failing to live up to promises that they'd avoid sweatshop labor.

In 1995, it came out that Gap was using child labor to manufacture their clothes.

They promised to make changes.

In 2000, they had a similar situation in Cambodia, and yes, they promised to fix the problem.

And in 2007, they were hit with yet another child labor scandal, and yes, again, they promised to make changes.

Fool me once, shame on you. Fool me twice, shame on me. Fool me three times, and it's pretty clear we're willing to accept child labor so long as it results in affordable fashion.

There are still lots of people ready to push back on companies that use child labor, but most of us seem content to sit on the sidelines and rake in the deals.

Some people take their demands to the streets.

And protest by becoming human billboards.

But most of us?

Companies need to be held accountable. It's no longer acceptable for them to just claim ignorance on the issue.

If you're a company like Gap, Forever 21, or H&M, and you don't know exactly which factory is producing your clothes, it's probably bad news.

If it seems to good to be true, it probably is — this goes double for $4 T-shirts, $12 blazers, and other deals.

The best thing you can do as a consumer is stay up to date on which companies are using child labor, and when you find one that does, take your business elsewhere.