In the '90s, two companies were using the same motto. They arm wrestled to see who got to keep it.

In 1992, Southwest Airlines and Stevens Aviation fought a battle over which company should be allowed to keep using their nearly identical punny slogans. 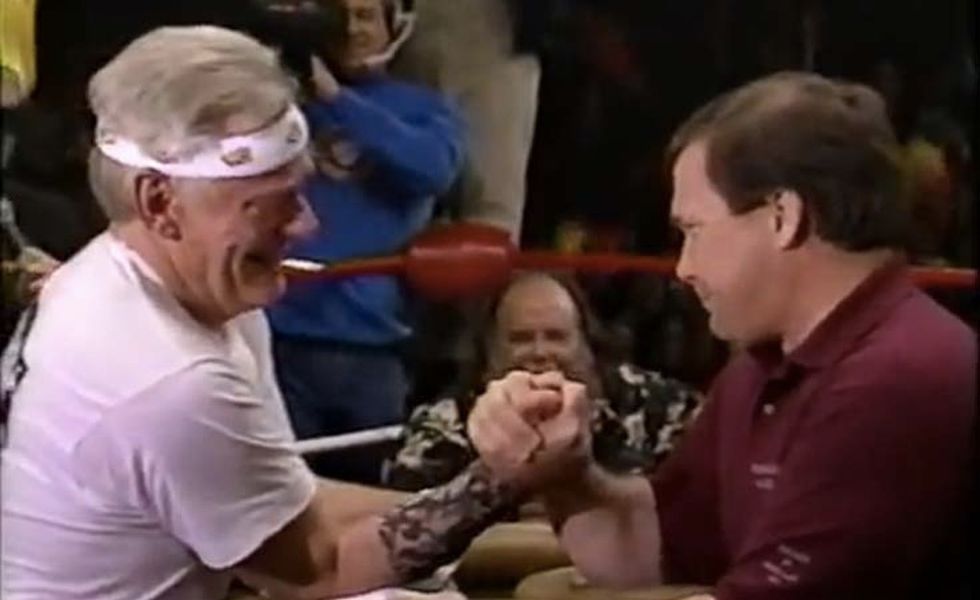 Southwest Airlines was founded in 1967 by Rollin King, an investment consultant, and Herb Kelleher, an attorney. Kelleher served as the company's CEO from 1981 until 2001 and oversaw many different initiatives during his tenure.

One of those initiatives was a marketing campaign around a new motto: "Just Plane Smart." Southwest proudly unveiled the punny new slogan in October of 1990, and it seemed to go over well.

Most people seemed to like it. But there was one notable exception: a guy named Kurt Herwald.

Herwald was the CEO of Stevens Aviation, a (much smaller) company that sells and services small aircraft.

Stevens Aviation, it turned out, had a slogan of their own, the very similar and also punny “Plane Smart." And Stevens had been using it in their ads for years prior and may have had it trademarked.

In late-1991 or early-1992, Herwald noticed that Southwest was using very similar words, and out came the muscle. But in this case, the "muscle" wasn't the Stevens Aviation legal team. It was the forearms of Kurt Herwald.

Herwald sent a unique cease-and-desist letter to Southwest ... challenging their chairman to an arm wrestling match.

The letter, sent to Kelleher's attention, is reprinted below ( via Inc.):

We LOVE your new ads that use the clever, creative, effective "Plane Smart" theme! We can testify to its effectiveness since we've been using it in our own ads for a long time. In the true fun-loving spirit on which Southwest Airlines was founded, we challenge you to a duel to see who gets to keep "Plane Smart" — big ol' Southwest or little bitty Stevens. (Please — no lawyers!) We trust that you accept this challenge in the spirit intended. ... No litigiousness implied at all. We challenge you to a sleeves-up, best-two-out-of-three arm wrestling match between you and our chairman, at high noon on Monday, January 27, 1992...

P.S. Our chairman is a burly 38-year-old former weight lifter who can bench press a King Air — or something like that...

If that sounds like a ridiculous thing to ask of a major, publicly traded company CEO, well, that's because it is.

But Stevens was right — Southwest has a longstanding tradition of being somewhat ridiculous. (For example, the company's stock symbol is LUV, a reference to "love," of course, but also to Love Field in Dallas, where Southwest Airlines hoped to operate from originally.)

Not only did Southwest reply, but CEO Kelleher did so personally, with style.

Our chairman can bench press a quart of Wild Turkey and five packs of cigarettes a day. He is also a fearsome competitor who resorts to kicking, biting, gouging, scratching, and hair pulling in order to win. When really pressed, he has also been known to beg, plead, whine, and sob piteously. Can your pusillanimous little wimp of a chairman stand up against the martial valor of our giant?

And shortly thereafter, Stevens and Southwest scheduled an arm wrestling match, dubbed the "Malice in Dallas."

Best two out of three, winner gets to use the name and makes a charitable donation as part of the deal.

And, while this was probably not in the contract, the two sides agreed to have a whole lot of fun in the process.

They hired an official/emcee who wore a massive wig, symbolic of fight promoter Don King; they rented out a Dallas-area wrestling facility; and, even though this was in the age before YouTube, they filmed faux pre-fight "training" videos of each of the competitors. And, thankfully for those of us in the YouTube era, they also filmed the match.

Here's round three, below. Herwald is the one in the maroon polo shirt. Kelleher is the guy in the headband and T-shirt with cigarette in his mouth, playing to the cameras.

In the video below, the arm wrestling match ends within the first couple of minutes, but it's worth watching until the end because some weird stuff happens (like, an impromptu wrestling match breaks out):

Stevens Aviation's CEO won the match and with it earned the exclusive right to use the "Plane Smart" slogan.

After the match, he immediately announced (as was clearly preplanned, given the novelty check that soon followed) that Stevens was going to continue to allow Southwest to use the motto in exchange for a $5,000 donation to Ronald McDonald House of Cleveland.

Kelleher presents the check made out to Ronald McDonald House. Image via Southwest Airlines Archive (Unofficial).

Both Stevens and Southwest got a nice PR bump out of the creative way to avoid litigation (and associated legal fees), and for Stevens in particular, it likely led to rewards.

As Priceonomics notes, "Stevens Aviation, previously a peon in its industry, rose to prominence: It experienced a 25% growth over the next four years, during which its revenues rocketed from $28 million to over $100 million."