I went skydiving twice — in two genders. Here's what it taught me.

This transgender woman is on a mission to repeat all the things she did before coming out. 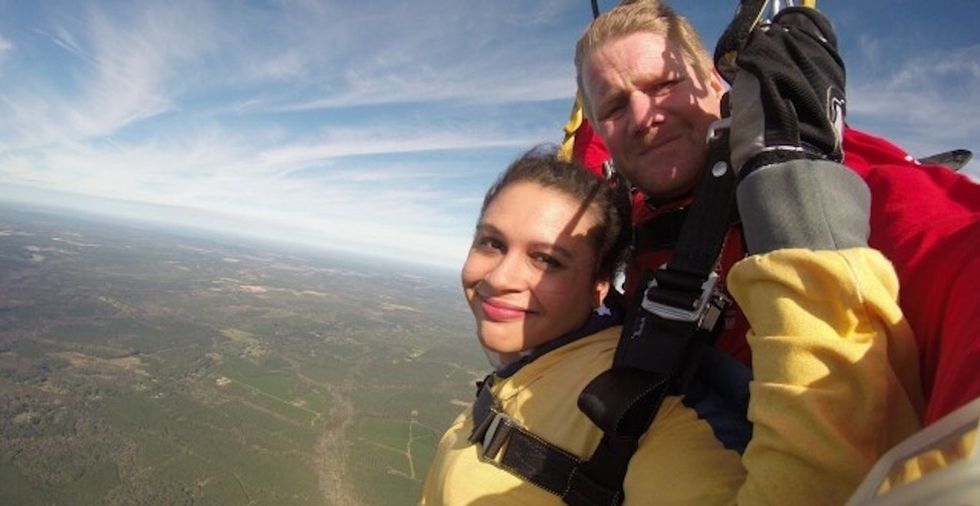 I am living as a woman the second time I prepare to leap out of an airplane, 7,000 feet above Florida, the world filled with the drone of the plane like the rumble of some metal giant’s stomach.

The plane has one seat for the pilot, and my back is pressed against it. I’m facing the man I will be strapped to when we step into the space beneath the clouds. I am not as nervous this time as he checks the harness.

The door of the plane cranks open, and it’s like the rush of a storm has entered the plane. I imagine I am being pulled out of the plane as my partner tells me to crawl toward the open door. Instinctively, I begin grabbing at the controls because I want something to hold on to, until I realize that the pilot is yelling at me over the twin roar of wind and plane to let go.

Me during skydive #2. All photos here are mine.

I have skydived in two genders.

The first time I’d gone on a tandem dive was years before I came out as queer in any sense. I jumped out of the same plane over the same patch of Quincy, Florida, but I was living as a male then. From what I remember, it felt like a strange nightmare. I was partly to blame, as I had gotten the idea of skydiving for the first time after a bad romantic breakup so as to briefly stop hearing, through sheer adrenaline, the station in my head that kept playing unhappy music.

But now, I can tell you that the other reason I didn’t enjoy that first jump was my sense that I had to act masculine during the whole process, lest the girl in me become too visible, lest I seem queer — the thing I feared so much. I felt I had to move and answer my dive partner’s questions in a certain masculine way, or he would suspect something. And, to be honest, I was also just scared. During that first jump, I had to practically be pushed out of the plane because I was too afraid to step out the door by myself. We rolled through the free fall rather than falling in a controlled way — it was awkward from plane to parachute.

As silly as it seems, I remember that during my first dive, I wanted to look like the girls — any of them — in the photos the dive shop published on social media.

It was superficial, in a way, caring about the photo more than the experience itself; but when you have no photos of you, but countless of someone people think is you, even something as pedestrian as a picture takes on an outsize significance.

I had no idea I would dive again, years later, as one of those girls both on and off the camera.

These dives are part of a project I’ve embarked upon to correct the contours of my life since coming out.

I try to do the big things I’ve done as a "male" as a woman, letting myself feel free to write my future by remixing my past — not erasing it under the eternal sunshine of a spotless mind, but making it right. Doing it better.

Months later, when I would snowboard at Breckenridge, Colorado, for the first time, I feel exhilarated, not just at fulfilling a dream from a largely snowless upbringing but because I’m doing so as a woman, as a person who my fellow snowboarders — all strangers — call she. My womanhood feels visible in this way, both small and vast at once.

Before I get on the plane to skydive a second time, I’m nervous again, but not for the obvious reason. This time, the fear comes from visibility.

Everything about this experience is flipped from the first time. Now, I want no sense of my past life’s masculinity present. The night before the dive, I worry for hours about whether I can "pass" if I tie my hair back, revealing the profile of my face. I seriously consider whether to wear makeup simply to mask any trace of visual masculinity.

Incredibly, there’s a tutorial on YouTube for skydiving makeup. The compass of myself is spinning madly. I watch the tutorial twice. I decide I’ll test the durability of a BB cream by Tarte at thousands of feet in the air, then feel ashamed at worrying so much about how I look. Then I feel the dread again that all this might go completely wrong — not because I’ll fall to my death, but because I’ll be reduced to my past.

I don’t want to be called "sir," to have that old ghost summoned by a word. I don’t want to be non-gendered — that neutrality that, sometimes, is a form of transphobia, a way of denying even the gender you present as because people cannot bring themselves to name you as such.

I just want to let go and be myself.

On the day of the second dive, all seems well, I think.

It is clear to me during that second dive how much visibility and trans-ness matters. I don’t tell anyone at the small skydiving school that I am transgender; I just want to go as a woman, with no other specific nonvisual label applied.

When I lean back to fall off the plane’s edge this time, I grin like it is the best day of my life.

After the dive, I return to the skydiving office with Cindy, the woman who runs the place, and another woman who is filling out the paperwork for her first dive.

The other woman steps out for a moment, and Cindy turns to me. She smiles and tells me she read an essay I wrote about being a trans woman before the dive, after I’d added the skydiving school as a friend on Facebook.

“I say, go girl!” she exclaims, chuckling and putting a fist in the air. She says that voice must be difficult, but that because I am from the Caribbean, I can perhaps compensate for it slightly by my accent.

At first, I feel deflated. Sad. I’d thought no one there knew.

Then, as I consider it more through the day, I realize that whether or not Cindy and my dive partner knew I was trans, they treated me in such a way that I had no way of knowing what they thought.

To my dive partner, I was simply a woman, undefined as any category of that term; and to be a trans woman, after all, is to simply be a woman in its own category, just as it is a category to be a Dominican woman, a tall woman, any woman at all — and categories often intersect.

My dive partner had neither explicitly looked down on me for being a trans woman nor congratulated me for it, either; he had just called me "girl" and "girlie" in a way that seemed natural to him. I was simply female to him.

And wasn’t that, I wondered, the best possible outcome? Where, "read" as transgender or not, you are treated as the person you are in such a way that you wouldn’t know if anyone else had read the book of your history in your face, your body, or somewhere else?

I stood in front my bathroom mirror one night after the dive, staring at myself.

A faint orange-yellow lamp shined in the background, the sink was in shadow, and I looked like a figure in a chiaroscuro. For a while, I just stood there. I smiled, but I was sad. The sex I had been born with seemed, in that moment, a kind of secular curse.

But it was not a curse. I would not have been me, really, had I been born like so many cisgender women. This pleasant-pedestrian-painful reminder happens every so often, reminding me that I was always a woman, but I would have been a different woman had I been born cis.

This is as obvious as can be, but so easy to forget and so important: We are who we are, and we would not be that person if we had been otherwise. If we wish to celebrate ourselves and others, we must start by banishing the desire, if we have one, to have been born something else.

Now, I remember the rush of the fall through the air and how, this time, all I felt was bliss as the air rushed into my face like a vast waterfall in reverse.

I remember the moment when the parachute opened, and the roar of the wind stopped, replaced by a beautiful, calm stillness as we descended on the wind to where we had set off from.

Let’s celebrate the future by taking from the past — and making it better in the present.