How an ancient city in Illinois is making us rethink gender roles. 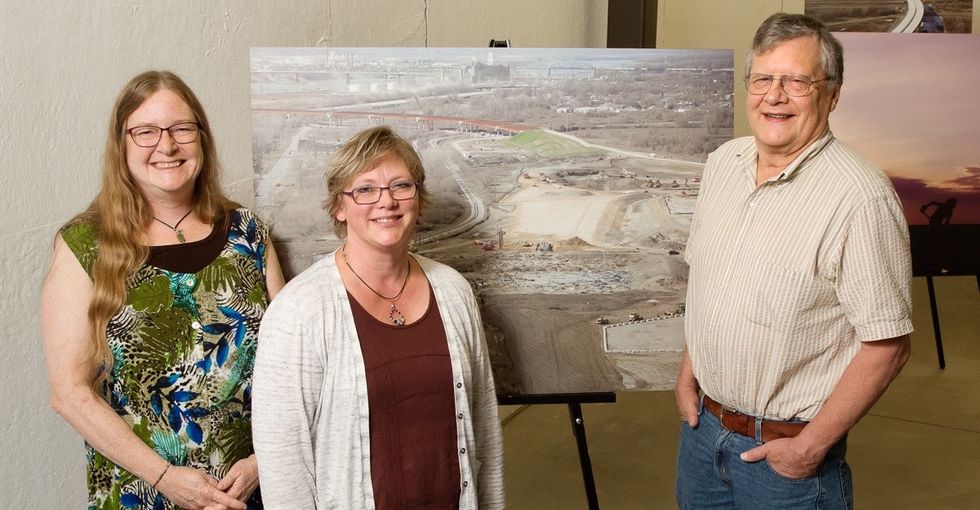 In 1967, an archaeologist was excavating a giant, ancient city in the middle of Illinois.

What Cahokia may have looked like at its peak. Painting by William R. Iseminger/Cahokia Mounds State Historic Site.

The city, called Cahokia, existed from about 600 A.D. to about 1300 A.D. and is located across the river from modern St. Louis. It was massive; no other city in the contiguous United States would rival it until the 1800s.

In the midst of the city, archaeologists found something they called a monument to male power.

Cahokia Mounds has a number of giant structures, called earthworks. Inside one of them, Mound 72, archaeologist Melvin Fowler discovered a large number of burial sites. These included what appeared to be the graves of two very high-powered people who had been buried on cedar litters and surrounded by a bed of beads.

Artifacts from Cahokia. Photo from L. Brian Stauffer/University of Illinois.

Looking at the evidence, Fowler proposed that these bodies were both men, warriors and chiefs, which would make the entire site effectively a monument to them and their power.

This assumption was echoed outward for years.

"Fowler's and others' interpretation of these mounds became the model that everybody across the east was looking at in terms of understanding status and gender roles and symbolism among Native American groups in this time," Thomas Emerson, director of the Illinois State Archaeological Survey, said in a press release.

But new research has smashed that assumption.

An updated diagram of the beaded burial site. Image from Julie McMahon.

"We had been checking to make sure that the individuals we were looking at matched how they had been described," said anthropologist Kristin Hedman. "And in re-examining the beaded burial, we discovered that the central burial included females. This was unexpected."

Even the notes about those two central elites were wrong. They weren't two men; they were one man and one woman. This completely changed the meaning and symbolism behind Mound 72.

Turns out, Cahokia wasn't a completely male-dominated society. It was a lot more equal than that.

"Now, we realize, we don't have a system in which males are these dominant figures and females are playing bit parts," Emerson said. "What we have at Cahokia is very much a nobility. It's not a male nobility. It's males and females, and their relationships are very important."

And this actually lines up better with some other stuff we know about this city, too. For example, a lot of the temples around Cahokia weren't dedicated to war or male power at all.

This undated photo shows a dig at Cahokia. The sign may say '86, but it's too blurry to tell. Photo by University/AFP/Getty Images.

"The symbolism is all about life renewal, fertility, agriculture," Emerson said. "Most of the stone figures found there are female."

In fact, when the Spanish and French came to the area in the 1500s, they noted how many societies had both men and women in positions of power, Emerson said.

Emerson attributed the mistaken assumption to archaeologists projecting warrior culture from the southwest back east — which is kind of a big mistake considering that it was hundreds of years earlier and hundreds of miles away. Plus, Native Americans aren't one single homogenous culture but hundreds of different nations with rich, complex, diverse histories.

As a side note, it's kind of awesome to see more evidence suggesting that not all societies are doomed to fall into systems with unequal gender roles.

We don't know enough to make grand pronouncements about specific aspects of Cahokian society — after all, it's totally possible that new evidence is still out there and will challenge all our assumptions yet again — but it's cool seeing how this new evidence hints that we shouldn't think that everything has to be a "monument to male power."

After all, both science and progress thrive when we challenge assumptions.

A vertical garden is the gift that keeps on giving

Growing your own food has been a trend, but with the financial and social distancing challenges that 2020 has presented, it feels more relevant now than ever before. No matter how small your living space is, vertical gardening makes it possible to pick your fruits, vegetables and spices right off the vine without having to leave your house. Not only are you guaranteed the freshest possible food (with no pesticides), but the last time I checked that bag of carrots you bought at the grocery store doesn't grow more carrots. Vertical gardening brings convenience, aesthetics and sustainability to your home. And when some weisenheimer calls your dish out for not having fresh basil, you can pluck a few leaves off the basil plant on your "spice wall" and drop them on their plate like you just won a rap battle.

2020 has been a long year. So long, that it might have even been five years packed into one. Why not start the new year off right with a little self-care? If you want to turn 2021 into a 365-day spa day, nobody's going to blame you. These products on Amazon can help you ring in the new year with some R&R.

'Marriage: A Story of Love in 28 Parts' has long-time couples rolling

After torturing parents for more than two decades, Caillou has finally been canceled

The last living spouse of a Civil War veteran has died