Here's what 'The Exorcist' showrunner said to criticism of a gay kiss.

'I’m glad you didn’t like it, I’m glad it ruined the show for you.' 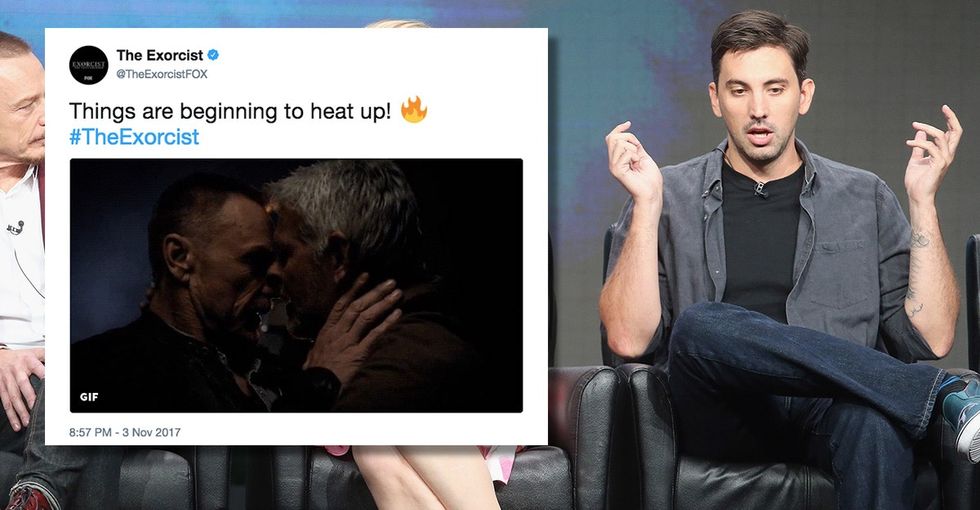 Some fans of Fox's "The Exorcist" are offended — and it's got nothing to do with the show's massive amounts of gore and violence.

Instead, it's a romantic storyline — specifically, a kiss — that has some viewers in a bit of a huff. The problem? The two people kissing are both men!

Showrunner Jeremy Slater responded to some critics of the gay kiss, and let's just say he didn't hold back.

"I saw a couple of homophobes on Twitter and my response is, 'Good, fuck you. I’m glad you didn’t like it, I’m glad it ruined the show for you. You shouldn’t have good things in your life,'" he said in an interview with SciFi Bulletin.

"If a homophobe can’t watch the show any more because one of the characters is gay, then I’m glad something good has come out of it. This is 2017 and we still have people throwing temper tantrums on line because they don’t want to see gay characters. I think it’s the last gasp of a certain breed of dinosaur that’s on the way out, and let them kick and scream as they go."

The fact that there's still any sort of backlash — Slater does say that the response was "99% positive" — shows how lacking LGBTQ representation remains in mainstream media.

Things are getting better when it comes to showing depictions of LGBTQ characters in primetime TV, but according to LGBTQ media watchdog group, GLAAD, they're still underrepresented. In the group's "Where We Are on TV" report for 2017, LGBTQ characters make up just 6.4% of all regular characters.

A number of studies have shown that positive media depictions provide LGBTQ viewers with a source of pride and inspiration. Additionally, sensitive and authentic portrayals can help viewers come to terms with their sexuality or gender identity. Alternatively, non-LGBTQ people often point to positive portrayals of LGBTQ folks as a sort of watershed moment for their own increase in acceptance — "Will & Grace" has been long heralded as an example of that.

"I think the moment meant a lot to a lot of viewers, particularly viewers who aren’t necessarily used to seeing gay representation on TV with older characters that’s treated with the sensitivity that Ben and Christopher [Cousins] both brought to that performance," Slater added.

Sure, Slater and his team could have played it safe and cut the kiss out so as not to potentially offend any fans while waiting on news of a possible third season renewal, but he didn't.

On Twitter, "Exorcist" writer Carlos Foglia (Full disclosure: Carlos is a former Upworthy employee) put it like this: "We'd love more ratings, seriously, but we wayyyy prefer not being shitty people." Let's see if that pays off.