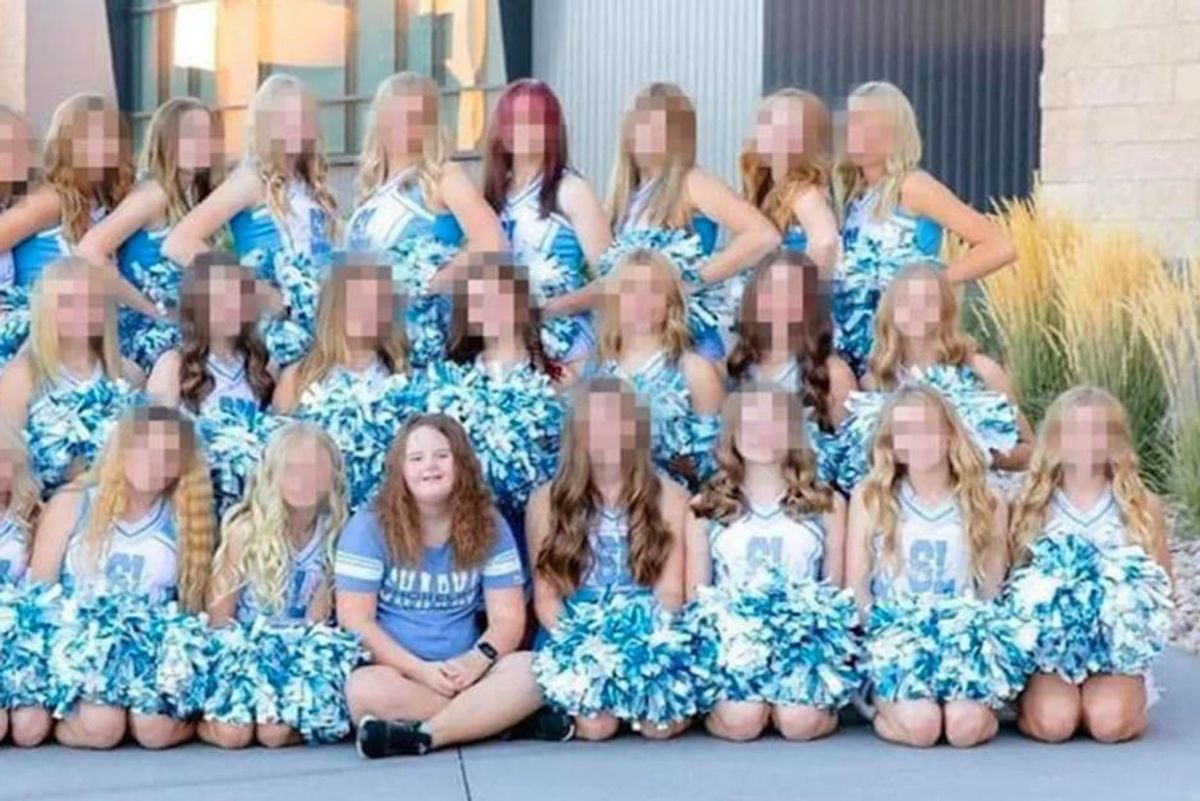 A school in Utah has made an inexcusable mistake and has yet to provide a decent answer for why it happened. The photo the school published of its cheerleading squad excluded Morgyn Arnold, a 14-year-old with Down syndrome.

Morgyn is the team manager who learned all of the routines and cheered beside the squad at home games. But she's nowhere to be seen in the squad photo that was published in the school's 2020-2021 yearbook.

What's worse is that the squad took two photographs, one with Morgyn in the front row and one without.

The picture with Morgyn.

The photo that was published.

"The first picture you see is a cute junior high cheer team," Morgyn's sister, Jordyn Poll told Today. "The second, although similar, includes all members of the team. It's the SAME cheer team–SAME girls, SAME photo shoot, SAME poses, but one included all team members and one did not.

"Additionally, Morgyn's name wasn't even mentioned as a part of the team," Jordyn added. "She wasn't included. She spent hours learning dances, showing up to games, and cheering on her school and friends but was left out."

Morgyn realized she had been excluded from the photo immediately after receiving her yearbook.

"She came home from school and was showing us her yearbook," Jordyn explained. "She said 'There's my team and there's my friends and I'm not included.' She was devastated."

The family wants to know why Morgyn was left out so her sister wrote a lengthy Facebook post describing their pain.

Teen with down syndrome left out of cheerleading yearbook photo www.youtube.com

The school posted a statement on its Facebook page but it has since been deleted.

"We are deeply saddened by the mistake that was made," the statement read. "We are continuing to look at what has occurred and why it occurred. Apologies have been made to the family and we sincerely apologize to others impacted by this error. We will continue to address it with the parents of the student. We will continue to look at our processes to ensure this does not happen again."

The junior high school and its cheerleading squad have suspended their social media accounts due to the incident.

Jordyn wants answers for the school's screw-up but doesn't want any hate directed at the girls on the cheerleading squad.

"There's been so much hate directed to these other girls and it's so unnecessary," she said. "They are kind and did their very best to include Morgyn and make her feel like she belongs and they continue to do so and continue to reach out and let her know that she is loved. If it was up to them, they would have included her in the photos."

Unfortunately, the school has yet to provide a reason for Morgyn's omission. Jordyn says that her sister is getting over her initial feelings of rejection with her usual kindness.

"I think a lot we can learn from her example," Jordyn said. "She's forgiven them and moved on. She's sad, when she looks at the pictures. Her example speaks a lot, and she's excited to continue to find memories and continue cheering."