Dutch Bros Coffee hopes to raise $1.5 million for ALS research on Drink One for Dane Day. 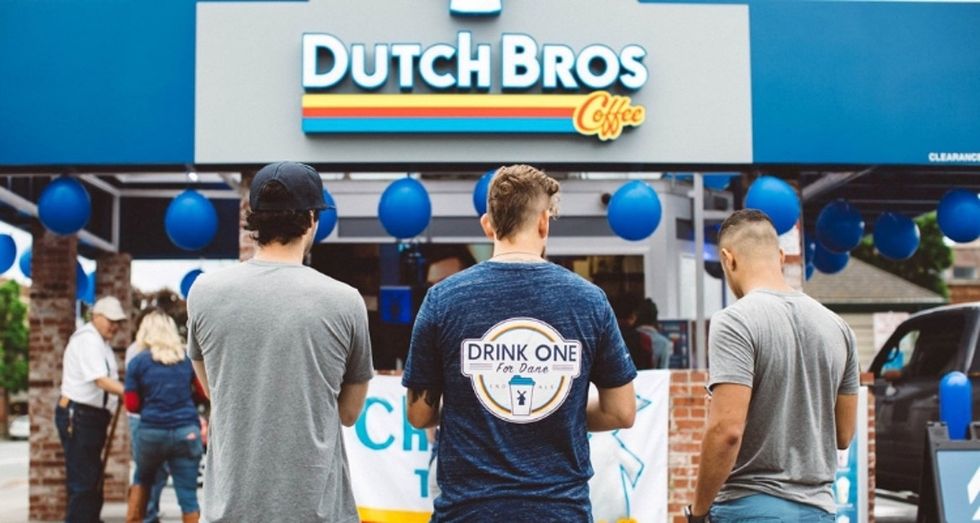 When Dutch Bros. Coffee founder Dane Boersma got terribly sick, the family thought he had Lyme disease. It turned out to be ALS.

At the time of his dad's diagnosis, Brant Boersma knew almost nothing about ALS. All he really knew was that Lou Gehrig had it and was forced to retire from baseball because of it.

"Now I know more than I wanted to," says Boersma. "This disease is brutal. It’s evil. To put it simply, you slowly become a prisoner to your body. In my Dad’s case it was slow moving, but when it’s so intimate to your life, time doesn’t matter anymore."

ALS is notoriously difficult to diagnose, especially in the early stages, because it mimics many other neurological disorders. It inexplicably causes motor neurons to die, slowly but surely taking away the ability to move, talk, eat, and breathe. Dane didn't receive a full diagnosis until had already had respiratory failure and was on a ventilator. But Brant and the rest of Dane's family had watched his decline with helplessness and confusion.

"Words don’t really matter or even compare to the feeling of watching your hero go through such a traumatic experience," says Boersma. "I just knew that I needed to be there with my family, by his side."

Dane passed away in 2009 after a four-year battle with ALS.

Boersma created Drink One for Dane Day at Dutch Bros. to honor his dad and raise money for ALS research.

Boersma describes his dad as "an incredible man" and his personal hero. "He was like a social glue that brought a variety of people together," says Boersma. "He had so many friends and loved so many people." He was known to many by his nickname, The Wiseman.

After what his family went through with Dane's journey, Boersma wanted to do something to educate people about ALS. "Nobody really knew what it was," he says, "so we wanted to not just honor him, but bring awareness to this disease. Shed some light on what it is, bring it to people’s attention."

"Also," Boersma adds, "we wanted to remind those people that cared about him so much that life is happening and we should celebrate that."

And so Drink One for Dane Day was born. On May 10th, Dutch Bros. Coffee will dedicate all of their coffee sales to ALS research—and to the man who never let his debilitating disease get in the way of his love for a good cup of coffee.

"Every Dutch Bros Coffee poured on Drink One for Dane Day will fund the Muscular Dystrophy Association’s (MDA) crucial ALS research which is critical to find a cure," says Boersma. "Since its inception, MDA has invested more than $165 million in ALS research, with $20 million having been spent in the last five years."

Drink One for Dane Day is as much a celebration of life as it is a fundraiser for a deadly disease.

More than 30,000 people will be diagnosed with ALS this year, and most will be given two to five years to live. There is no cure at this time.

Boersma hopes Drink One for Dane Day will help researchers find a way to treat the disease However, he says that the May 10th event is about much more than funding ALS research—it's a celebration of life and "a battle cry for love."

On Drink One for Dane Day, I cruise in to all the Dutch Bros stands in town. I buy drinks and toast with family, friends, and strangers. The day has become so much bigger than a disease. It has become this reminder that humanity is incredible. In spite of obstacles or pain, we rally together not only in the pursuit of conquering this horrific disease, but also to unite and celebrate what we have—the ability to make a difference not just in our own lives, but each other’s. Drink One for Dane Day is a battle cry for love, and that’s what my Dad did so well with his life. He fought for love, not just on an intimate level, but on a community level. So if you read this and you’re out there on May 10th, know that there’s a whole community of humans raising a cup to life and love and the ability to make a difference. And even if you can’t donate or swing through and grab a drink, take a minute and salute with us the hope and dream of a greater world.

In 2018, Drink One for Dane Day brought in $1.3 million for the Muscular Dystrophy Association. This year, they're shooting for $1.5 million.

Brant Boersma will be at the original Dutch Bros. stand in Grants Pass, Oregon on Drink One for Dane Day, raising a toast to his hero, The Wiseman. If you'd like to join him May 10th to help fund ALS research, find a Dutch Bros. location near you here.