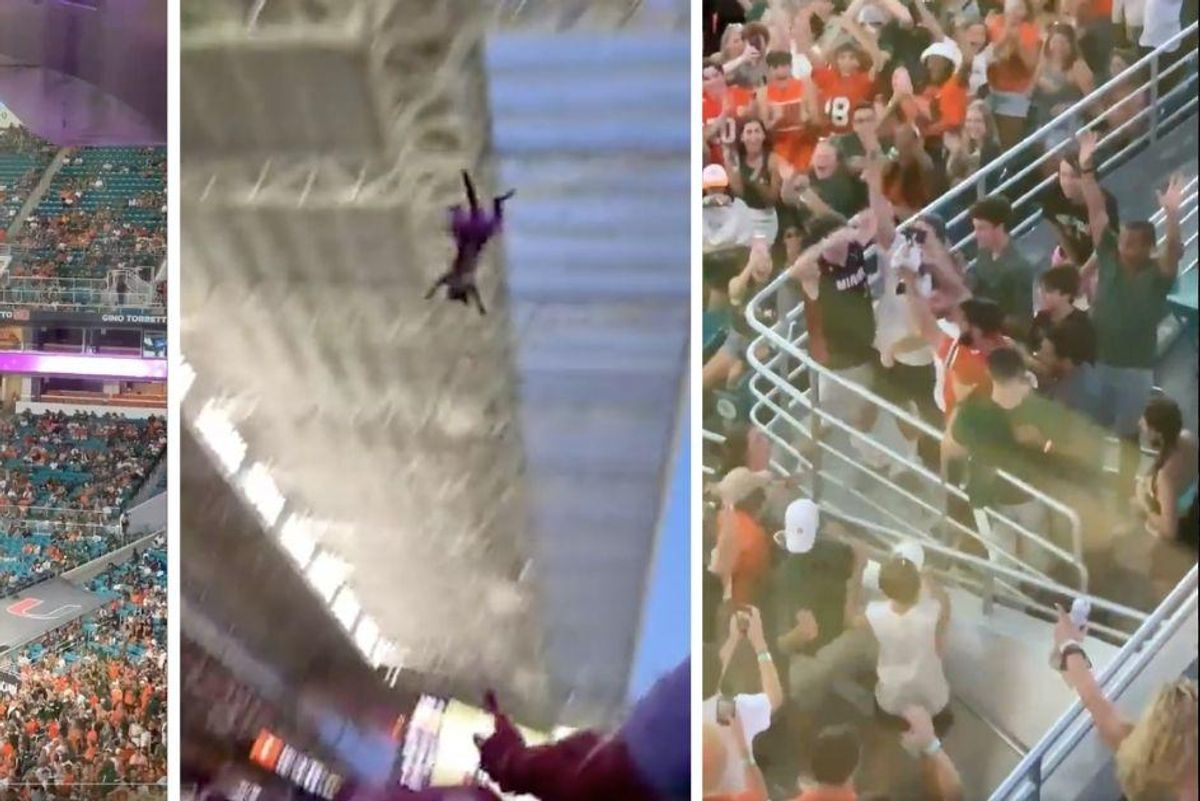 At college football games, you know to expect the unexpected. But no one could have anticipated the wild string of events that took place at Hard Rock Stadium in Miami over the weekend.

Somehow, a cat not only made it into the stands, but ended up dangling by one paw from a piece of fabric draped across the upper deck before falling into the waiting arms of a group of guys using an American flag as a net. The rescue was caught on video from various angles and it's absolutely bonkers.

Well this may be the craziest thing I’ve seen at a college football game #HardRockCat https://t.co/qfQgma23Xm
— Hollywood (@Hollywood)1631403267.0

The flag didn't really catch the cat so much as break its fall a bit. And apparently, the cat peed on its rescuers, but who can blame it? Poor thing had to have been terrified. And honestly, the Lion King reenactment probably didn't help much.

The reaction from the crowd was the best part. Everyone in the area watched with bated breath when they saw the cat dangling and cheered when it was confirmed the cat was alive.

The question, of course, was whether it was injured. Cats are known to be able to survive falls from incredible heights, but that doesn't always mean they're perfectly okay afterward.

Two University of Miami emergency vet students who were nearby in the stands rushed to examine the cat as it was being handled by the fans.

"I saw this lady grab the cat," certified emergency veterinary medic Emilia Weiss told The Miami Hurricane, "and I go up to her and I'm like, 'Hey I'm certified in emergency vet med, I worked in an emergency hospital for pets, please let me take care of this cat. I know what to do.'"

With the assistance of another vet student who held the cat's jaw shut, Weiss examined the cat. She saw one of its hips was out of place, so she popped it back in.

However, Weiss said, a middle-aged woman tried to grab the cat away as it was being examined and the cat (understandably) bit her. The cat then ran away and bit several more people who tried to catch it, including Weiss, before escaping altogether. Weiss said it didn't appear to have sustained any spinal injuries, but since it could have a disease, those who were bitten needed to get shots.

"I've never had to use my knowledge of emergency vet med," said Weiss. "It was the weirdest experience ever."

Definitely not something you see every day. It was heartwarming to see people of all stripes come together, even just for a moment, in an effort to save a life.