Chris Rock blows the elephant out of the room with #OscarsSoWhite monologue. 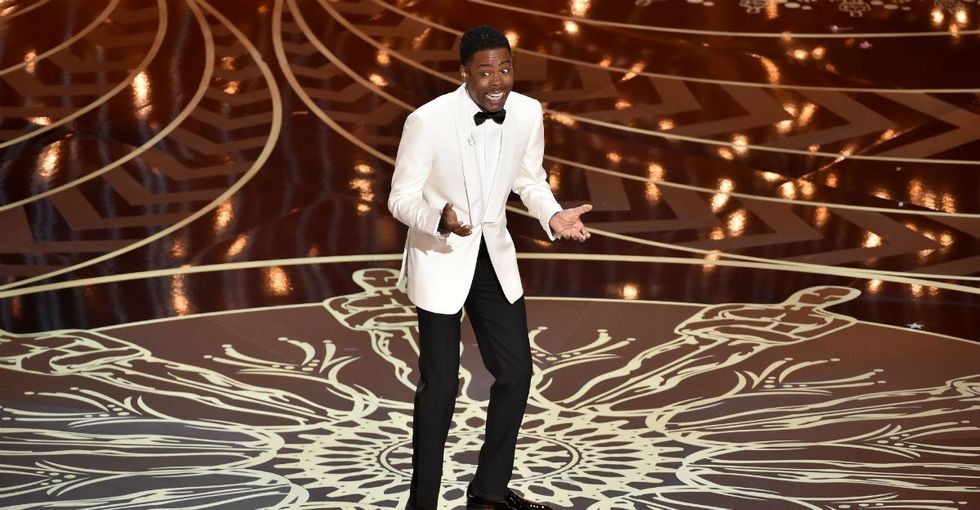 He took the elephant in the room by the trunk and pulled it center stage for all the world to see at this year's Oscars. And he raised some excellent points.

But really ... was anyone surprised?

In case you missed the memo, the Oscars were inexcusably white this year — for the 88th year.

This was the second year in a row that every single slot for every single acting nomination — all 20 of them — were filled by a white actor or actress. The same exact thing happened in 2015.

Actor Eddie Redmayne, who won best actor in a leading role in 2015, was nominated this year for his role in "The Danish Girl." Photo by Christopher Polk/Getty Images.

Clearly, Rock — whose clever, blunt commentary on race helped build his legendary career in comedy — was the perfect guy for the hosting job this year. It seemed like fate.

As Salon's Andrew O'Hehir put it, the 2016 Oscars were "arguably the moment that Rock’s entire career has pointed toward." And he didn't disappoint.

During his opening monologue, Rock wasted no time diving in on the touchy subject in a room filled with (mostly white) famous faces.

Although he said a few things that raised eyebrows for the wrong reasons (like half-heartedly joking that the Oscars' diversity problem isn't a "real [thing] to protest"), he hit the nail on the head getting at the heart of the issue:

“Is Hollywood racist? You know — you got to go at that the right way. Is it burning-cross racist? No. Is it fetchme some lemonade racist? No, no. It’s a different type of racist.”

Rock told the story of when he was at a fundraiser for Barack Obama filled with Hollywood heavyweights and joked to the president while taking a photo with him that not even the most progressive people in the film industry actually hire people of color.

“I’m like, Mr. President, you see all these writers and producers and actors? They don’t hire black people. And they’re the nicest white people on earth. They’re liberals. Cheese!”

“Is Hollywood racist? You're damn right Hollywood is racist.”

Rock got it right. A lack of diversity at the Oscars is the result of a much larger systemic problem in Hollywood.

Yes, the Academy itself has a diversity problem — the vast majority of its voting members are older, white, and male, which certainly doesn't help in ensuring people of color are recognized. But the problem runs deeper than that.

Movies that are made by and feature people of color aren't getting produced in Hollywood.

(Or at least not at the rates they should be.)

This is a big factor in why there are far fewer roles for non-white actors, thus fewer opportunities to be nominated for an Oscar.

Why is this the case? Well, for starters, studios are hesitant to take bets on movies they deem financially risky. And potential films that deviate from the norm by being carried by a black character — or, say, an LGBT lead, or a cast with predominantly women — can scare these (mostly straight, white guy) producers away simply because they're different.

Never mind there are many examples that suggest this line of thinking gets it wrong, like last year's "Straight Outta Compton" and "Spy" — two films that tore up at the box office. But the reality is, movies made by and starring people of color are still relatively few and far between, which doesn't bode well for diversity come award show season.

Actors in "Straight Outta Compton," a film many thought was largely snubbed at this year's Oscars. Kevin Winter/Getty Images.

It also doesn't help that when storylines featuring people of color actually do make it onto the big screen, Hollywood has an ugly habit of filling the role with a white actor. This is called "whitewashing" and it's been happening for generations (from Elizabeth Taylor playing "Cleopatra" in 1963 to, more recently, Rooney Mara playing Tiger Lily in "Pan").

The buildup to Rock's hosting was almost palpable, as the comedian — never shy about speaking his mind — had pretty much kept mum.

It must've had more to do with him building hype than not having two cents to give. Because as his past comments on Oscars diversity show, he's not one to keep quiet on relevant subject matter.

Chris Rock as host of the Academy Awards in 2005. Robyn Beck/AFP/Getty Images.

This year, Rock kept a relatively low profile on the controversy leading up to Sunday night, referring to the Oscars as "the white BET Awards" in one tweet and sharing a mysteriously vague #Blackout message in another.

The good news with all of this? Rock's monologue is part of a wave of (deserved) criticism demanding better of Hollywood.

Last year, when every acting category was filled with white actors, the hashtag #OscarsSoWhite swept the web, drawing attention to the issue. The hashtag resurfaced this year, bigger and better than before and drawing renewed attention to this problem.

The Academy heard the outcry and has taken some steps in diversifying its membership, which one can only hope will reflect in the artists nominated down the road.

"We are going to continue to take action and not just speak," Cheryl Boone Isaacs, Academy president, said during the event's red carpet coverage.

Many, many actors (of all colors) also have spoken out on the issue, too, saying big changes are very necessary.

But until that change comes, we have Rock's two cents.