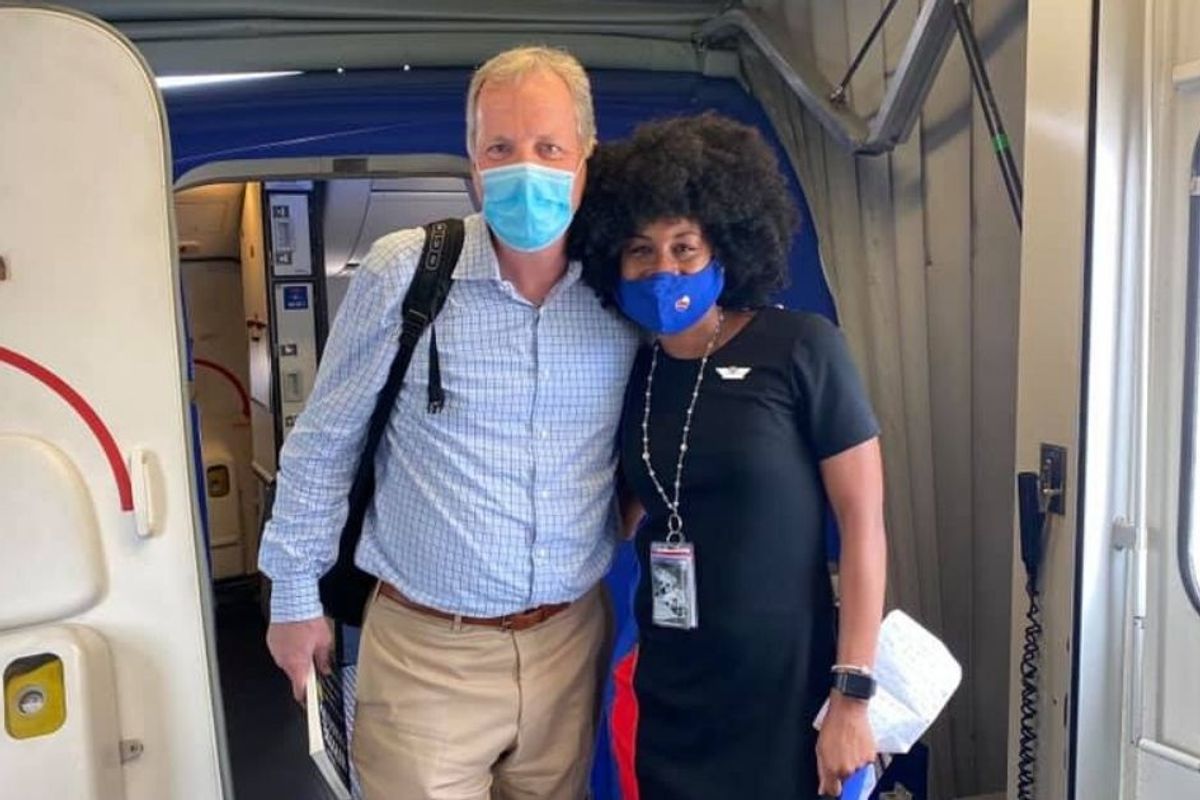 Sometimes a random encounter turns out to be not so random at all.

JacqueRae Hill, a flight attendant for Southwest Airlines, shared one such encounter on Facebook. She said that her heart has been heavy with everything going on, which is especially hard hard when your job is to put a smile on people's face. But something happened on a recent flight that lifted her spirits.

"As we are boarding my first flight of the day I smile and I greet people when they come on and a man was holding a book that has been on my to read list. The book is entitled White Fragility. I was so happy to see that book in his grasp that I knew after I finished my duties I was going to make a point to ask him about it. I go sit next to him as he was sitting in a row all by himself (That was God). I said Hey How are you? I see you are reading that book .. So how is it? He replies oh I'm half way through it's really good. It really points out how important these conversations on race are. As I began to respond the tears just start falling . I have been so sad every day and I just want to understand and be understood so we can began to fix it.

I'm pretty sure I startled him by seemingly dumping all my emotions on him but his reply was "I'm so sorry. And it's our fault that this is like this. We continued to talk and when I tell you it was everything I needed. I was happy ( even tho I was crying ). I went on to tell him about my prayer on my way to work today and that he Answered that prayer for me with this conversation. As our conversation came to an end he asks me my name I told him JacqueRae and then he said well I'm Doug Parker the CEO of American Airlines. I told him my mother works for him in DC and then I reached over and gave him a BIG HUG ! I HAD TO!! (yes we were both masked) I thanked him for being open and allowing this conversation to happen because I just needed to hear it and I walked off. I thanked God for his LOVE AND FAITHFULNESS the rest of the Flight. On his way off the plane he hands me a handwritten note and I thank him again and ask for this pic. This encounter is Only A Holy Spirit thing!!!!

There are so many different ways to affect change in the world. I stand with anyone who wants to make a difference no matter if it is how I would do it or not. I believe that God answered my prayer so perfectly that I want to be apart of an answered prayer for someone else. I'm following behind my sister Audresha Lynn by saying LETS TALK !! Doug Parker said that the premise of the book is that we need to have these conversations so here I am. My heart is open and my ears are open as well. BLESSED TO BE A BLESSING."

The note Parker wrote to her said:

"Thank you so much for coming back to speak with me. It was a gift from God and an inspiration to me. I am saddened that we as a society have progressed so slowly on an issue that has such a clear right v.s wrong. Much of the problem is we don't talk about it enough. Thank you for talking to me and sharing your emotion. That took courage. The book, White Fragility, is great. But it's more for people like me than you (a black friend recommended it to me). I really appreciate you. If you'd like to continue the conversation, my email is [blacked out]. Thank you! Doug

P.S. Say hello to your mother for me."

Hill's also shared a message from her mother, Patti Anderson, to Doug Anderson, and the beautiful exchanges just keep on going.

Hill shared that CNN Travel picked up her story and interviewed her via video call, so we can hear some of the story in her own voice.

You never know when a seemingly small action—like reading a book to better understand the realities of race and racism in our society—might made a big difference to someone who sees it. Knowing that someone in charge of an enormous company is doing that personal work—and not just for a photo op or PR display—is heartening to see, as the lessons learned will hopefully trickle down through that business and beyond.

Thank you for sharing, Ms. Hill. Seeing this kind of encounter play out offers us all a taste of hope in a time of difficult, but necessary, upheaval and change.