It's Black Breastfeeding Week. Wondering why? One gut-wrenching poem says it all. 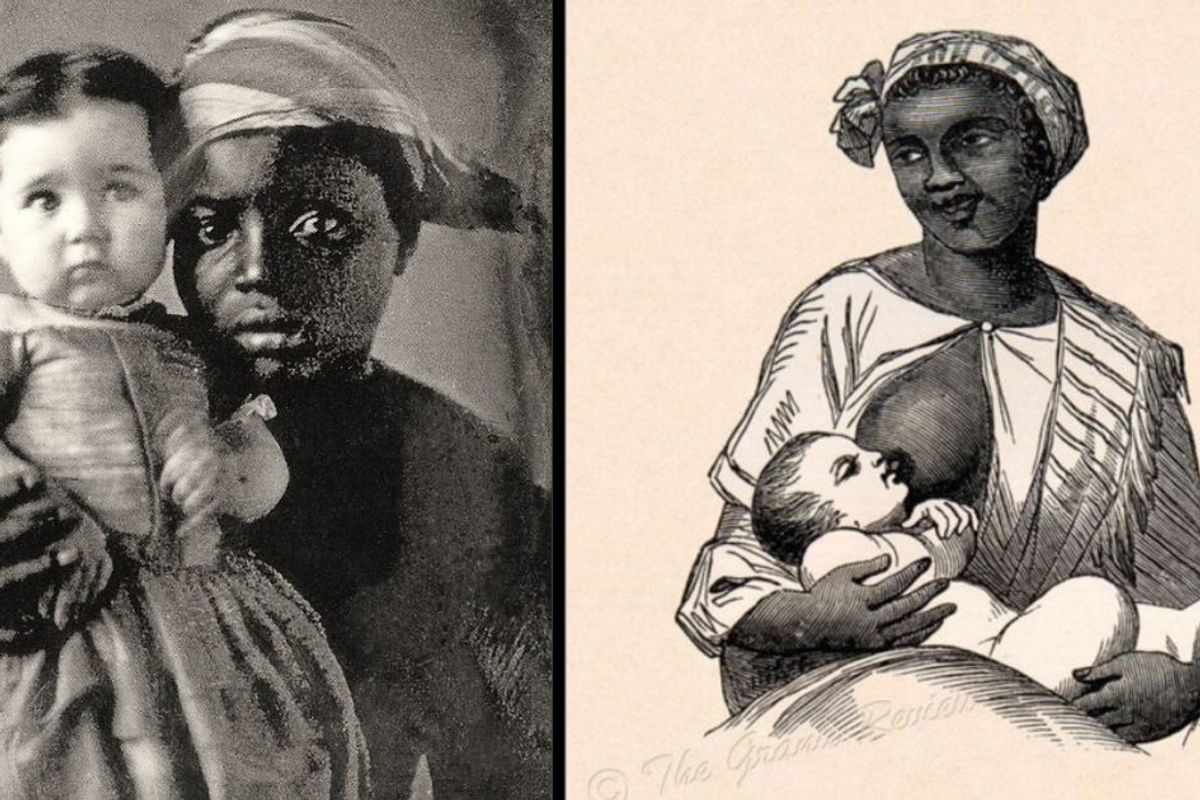 It's Black Breastfeeding Week, a week set aside in the U.S. to celebrate and encourage Black breastfeeding parents.

Some may wonder why such a week is necessary. After all, that's a pretty narrow niche, isn't it? Aren't Black moms included in all breastfeeding awareness and education campaigns? Is there something special about Black people breastfeeding?

The answer is yes, there is something unique about Black breastfeeding. Several somethings, actually, but one reason for Black Breastfeeding Week is summed up in a gut-wrenching poem by feminist author Hess Love.

As Parenting Decolonized points out, Black parents have only been able to raise their own children for less than 160 years in America. That's basically two 80-year-old grandmothers living back to back. For most of U.S. history, generation upon generation upon generation of Black families were torn apart. Black mothers were often not allowed to nourish and raise their own babies, but were forced to nourish and raise the babies of their enslavers. For most of U.S. history, Black breastfeeding meant wet nursing white babies, sometimes at the expense of a Black woman's own children.

And when I say "most of U.S. history," I mean that literally. Slavery was the standard for close to 250 years on our soil, compared to the 154 years since slavery was legally abolished (and almost 100 of those years still allowed legal discrimination). The impact of that reality doesn't just disappear because slavery ended and the Civil Rights Act passed.

However, the historical effects stemming from slavery are not the only reason Black Breastfeeding Week is important. Black mothers face higher maternal and infant mortality rates in the U.S., and according to the CDC, there are "substantial" differences in breastfeeding rates between Black mothers and white mothers.

Add in cultural and social issues surrounding Black women's bodies, ongoing negative perceptions of breastfeeding, and a lack of representation in the lactation support field, and the answer to the question "Why Black Breastfeeding Week?" becomes apparent.

"National Breastfeeding Month, which is observed the full month of August, addresses a few of the social concerns associated with breastfeeding, such as the mental exhaustion, the anatomical challenges, and the lingering stigma. But it doesn't address the ways each of these uniquely impact Black women.

The discourse that developed from Black Breastfeeding Week met me where 'regular' breastfeeding concerns left me struggling. It was a resource that tackled what it meant to nurse in public when your body is already hypersexualized. Black women and girls have some of the highest reports of sexual assault, as society seems to believe our bodies are community property- a message taught during slavery."

I know there will be people in the comments saying, "Slavery ended more than 100 years ago. Get over it." They don't understand the far-reaching effects of historical trauma. They don't understand that centuries of violent oppression followed by another century of blatant, legal discrimination impacts generations, and that the racism at the heart of all of that is still present in the health statistics of Black mothers and infants in America.

This is why Black Breastfeeding Week is needed. For more information, see www.blackbreastfeedingweek.org.

From Your Site Articles
breastfeeding

The 2020 general election will be unlike any in U.S. history due to a large number of people voting before election day, November 3.

The COVID-19 pandemic has many voting early, either in-person or by mail, so they can avoid large crowds of people. While others are mailing in their ballots early due to concerns over President Trump's attempts to stifle voter turnout by disrupting the United States Postal Service.

Four states officially started early in-person voting on Friday and if the number of people who've already cast a ballot in Virginia is any indication of a nationwide trend, voter turnout is going to be massive this year.

"What's 'the Holocaust'?" my 11-year-old son asks me. I take a deep breath as I gauge how much to tell him. He's old enough to understand that prejudice can lead to hatred, but I can't help but feel he's too young to hear about the full spectrum of human horror that hatred can lead to.

I wrestle with that thought, considering the conversation I recently had with Ben Lesser, a 91-year-old Holocaust survivor who was just a little younger than my son when he witnessed his first Nazi atrocity.

It was September of 1939 and the Blitzkrieg occupation of Poland had just begun. Ben, his parents, and his siblings were awakened in their Krakow apartment by Nazi soldiers who pistol-whipped them out of bed and ransacked their home. As the men with the shiny black boots filled burlap sacks with the Jewish family's valuables, a scream came from the apartment across the hall. Ben and his sister ran toward the cry.

They found a Nazi swinging their neighbors' baby upside down by its legs, demanding that the baby's mother make it stop crying. As the parents screamed, "My baby! My baby!" the Nazi smirked—then swung the baby's head full force into the door frame, killing it instantly.

This story and others like it feel too terrible to tell my young son, too out of context from his life of relative safety and security. And yet Ben Lesser lived it at my son's age. And it was too terrible—for anyone, much less a 10-year-old. And it was also completely out of context from the life of relative safety and security Ben and his family had known before the Nazi tanks rolled in.