Beyoncé is going on a new world tour, and she’s helping Flint along the way.

Beyoncé joins the group of A-listers fighting for the people of Flint, Michigan. 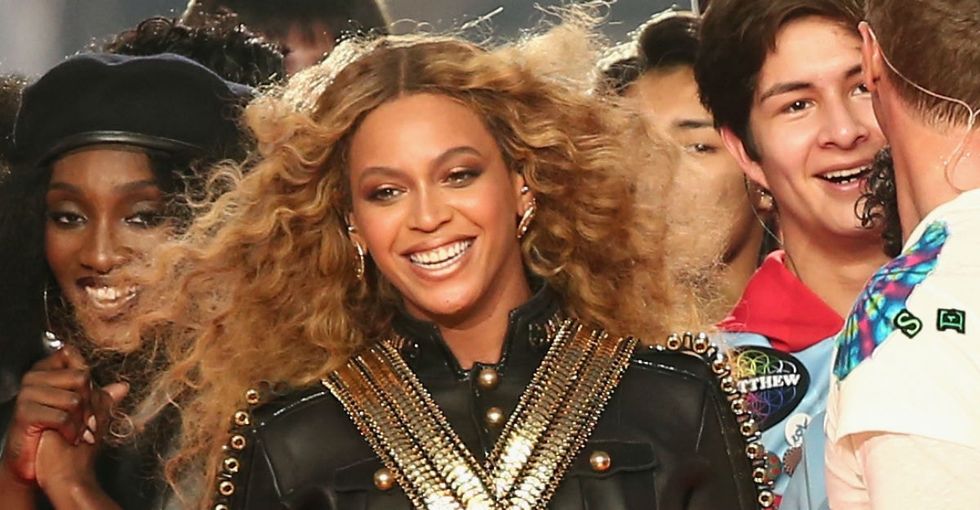 Beyoncé performed at the Super Bowl 50 halftime show. And she had more than a few surprises up her sleeves.

As to be expected with just about anything Bey-related, the Internet exploded in euphoria.

Her killer performance didn't shy away from getting political. And it was glorious.

Bey's all-female backup dancers were dressed to impress in outfits honoring the Black Panthers (the 1960s civil rights group that also celebrates its 50th anniversary this year). The lyrics to the new single she performed, "Formation," celebrate blackness and Southern culture while touching on the deep racial inequality that still lives on in modern-day America. The song's music video, by the way, features Bey squatting on a sinking New Orleans cop car in a Hurricane Katrina-ravaged neighborhood ... so yeah, her message was anything but subtle. (Again, glorious.)

Beyond her momentous performance, Beyoncé did something else that shook Bey Land to its core: She announced a new world tour, which is named "Formation" after her latest single, that will kick off this spring.

If the Internet hadn't been exploding Bey-ness before, by then, it certainly was.

But the coolest part about Beyoncé's new tour is that it'll help the city of Flint, Michigan, heal after its recent water crisis.

The pop star's #BeyGood charity initiative is partnering with United Way and the Community Foundation of Greater Flint for the tour "to create a fund that will address long-term developmental, education, nutrition, and health needs of the children affected by the Flint Water Crisis," according to a statement from the singer.

Specifics on how exactly the money will be raised from the tour have yet to be released, but fans are encouraged to follow @BeyGood on Twitter to get updates on how they can help.

Though Beyoncé's help is no doubt appreciated, Flint could use all of our support.

After Flint swapped its water source back in 2014 and failed to properly treat the water, lead started seeping into residents' supply. Folks complained the water didn't look right and that it smelled odd, but red flags were largely ignored for months.

A Flint 5-year-old gets her finger pricked during a lead screening. Photo by Brett Carlsen/Getty Images.

The debacle has exposed thousands of Flint children to lead, which can severely affect mental and physical development. Advocates across the state and country — along with a presidential candidate — have called on Michigan Gov. Rick Snyder to resign for dropping the ball at the expense of an entire city's health.

Beyoncé is the latest A-lister to shine a light on the water crisis.

Flint has had no short supply of help from Hollywood, with stars like Cher, Rosie O'Donnell, Snoop Dogg, Jimmy Fallon, and Big Sean (plus many more) pitching in to help those affected.

But we can't rely on Hollywood and bottled water to solve the problem. As Flint native and documentarian Michael Moore explained in an open letter, sending bottled water is like putting a Band-Aid on a cut that desperately needs stitches.

Yes, short-term solutions are important, but larger systemic changes — like fixing broken infrastructure and holding accountable the leaders who caused this mess — are vital in helping Flint in the decades to come (not to mention ensuring this won't happen again).

This isn't just a Flint problem, either. Communities across the country, from Albuquerque and Denver to Phoenix and San Diego, are suffering from deteriorating plumbing systems and compromised water. Just take a look at what's coming out of the tap in St. Joseph, Louisiana.

From the sounds of it, Beyoncé's focus on Flint might just spur some of the long-term solutions residents there so desperately need.

It's too soon to know how much the "Formation" tour will benefit Flint. But if anyone knows how to throw some weight behind a worthy cause, I'd put my money on the girl who runs the world.