After Brussels, many leaders were quick to blame refugees. Here's what Pope Francis did. 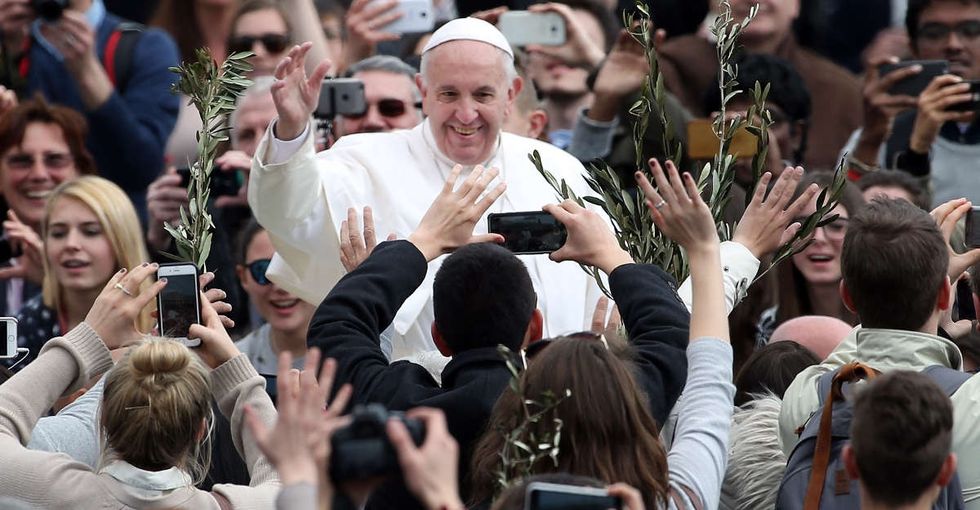 Unsurprisingly, the terrible bombings in Brussels have already sparked a backlash against refugees and Muslims.

Prime Minister Beata Szydlo of Poland declared that her country would no longer accept any Syrian refugees.

Two days after the attacks, he went to a refugee shelter outside of Rome, where he washed and kissed the feet of Muslim migrants.

Migrants arriving at the shelter where the pope performed the ritual. Photo by Alberto Pizzoli/Getty Images.

"We have different cultures and religions, but we are brothers and we want to live in peace," Francis said at the camp, where he also performed the ritual on Christian and Hindu migrants, according to an AP report. Francis began washing the feet of Muslims soon after he became pope in 2013.

Pope Francis reportedly proclaimed the refugees "children of the same god," and his symbolic act speaks volumes at a critical moment.

There are over one billion Muslims in the world. While nearly every religious community has its share of violent extremists, the entire diverse population shouldn't be held accountable for the actions of a tiny deranged minority.

To say ISIS is incredibly unpopular among Muslims would be a vast understatement.

Refugees are the last people who should have to shoulder the blame for the latest outbursts of violence.

Many of those fleeing Syria and Iraq are running from the exact same people who committed horrific acts of terror in Brussels.

The two attackers killed in the blasts were born in Belgium.

Driving a wedge between the West and the Muslim world is part of what ISIS is trying to achieve. Turning on our Muslim and refugee neighbors would be giving them the satisfaction.

With his visit to the shelter, Pope Francis' message was loud and clear: Even when terrible things happen, let's not fall back on prejudice. At the end of the day, we're all people.

Whether you're religious or not, that deserves an amen.