A woman reveals she's undocumented at her graduation speech and brings the house down.

After nearly six years in the U.S., Larissa Martinez opened up about her immigration status in the best way possible. 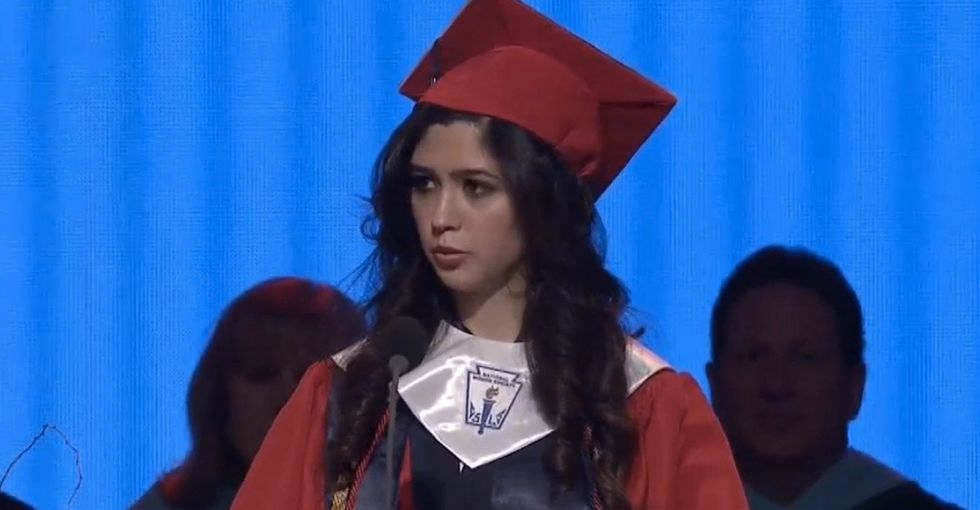 Larissa Martinez graduated valedictorian of her high school class. She had a 4.95 GPA, took 17 AP courses, and earned a full scholarship to Yale.

And as is tradition for valedictorians, Martinez put together a speech to be delivered during the school's graduation ceremony. When it came time to write her delivered remarks, however, Martinez veered from platitudes about following your dreams and never letting others stand in your way.

Instead, during her speech, she did something completely unexpected: She outed herself as an undocumented immigrant.

Up to that point, only 10 people at her high school knew about her undocumented status. Here she was, a heartwarming success story with a secret she hoped wouldn't mar how her classmates viewed her.

All GIFs via WFAA/McKinney ISD.

Her words clearly resonated with her classmates. She received a thunderous round of applause throughout her speech and a standing ovation at the end.

Martinez has been in the U.S. for nearly six years living with her mom and her sister.

The family fled her mother's abusive husband in Mexico City, hoping to start a new life in America. They never planned on being undocumented, and they tried to do it the "right" way. However, the U.S. immigration system is, sadly and frustratingly, broken. Seven years after applying for citizenship, her family's application still hadn't been processed.

"We are trying to do it the right way, but we don't know how," she told her classmates, asking them to look beyond how the media portrays immigrants, especially during this election season.

Her heartwarming message conveyed hope, calling on people to see immigrants as people, as part of America.

Because if you think about it, what makes her any less entitled to live here than the millions of other Americans whose families immigrated here? Most of us are American citizens by the pure luck of being born here. Why should her dreams be seen as less valid?

And being undocumented can make getting an education even harder, as many of those students struggle with fear of deportation.

A 2015 UCLA study of college students found that, as the result of looming concerns about being deported, many undocumented students struggle with anxiety.

About 29% of undocumented men and about 37% of undocumented women surveyed had an anxiety score above the clinical cutoff level. Those numbers are pretty extreme when you compare them to the rates of anxiety in others surveyed (4% for men and 9% for women).

She ends her speech with quite a mic drop.

"I ask for all of you to try to look beyond the way in which the media portrays us and the dehumanizing accusations that some politicians have made."

You can watch WFAA's report below, and you can view her whole speech here.