A student asked a straight teacher why he wore a rainbow shirt. His answer was perfect. 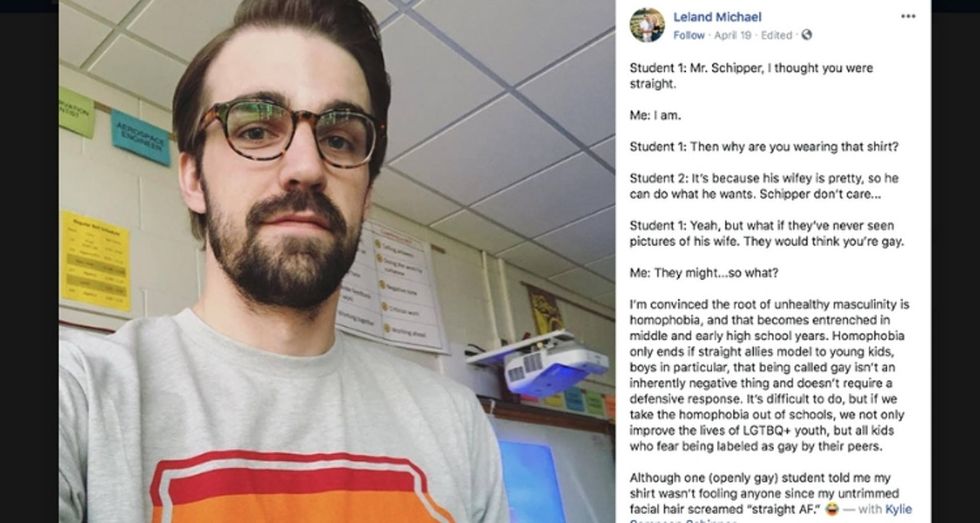 Leland Schipper's students wondered why he wore a rainbow shirt since it might make some people think he's gay.

He teaches high school math, but like most educators, Leland Schipper teaches other lessons too. An exchange with two students over a shirt Schipper wore is a perfect example.

Schipper shared the story on his Facebook page along with a photo of himself in a t-shirt bearing a rainbow-filled outline of the state of Iowa, where he teaches.

"Student 1: Mr. Schipper, I thought you were straight.

Student 1: Then why are you wearing that shirt?

Student 2: It’s because his wifey is pretty, so he can do what he wants. Schipper don’t care...

Student 1: Yeah, but what if they’ve never seen pictures of his wife. They would think you’re gay.

Student 1: Mr. Schipper, I thought you were straight.Me: I am.Student 1: Then why are you wearing that...

Schipper went on to explain why he felt it was important to show his students that he was not embarrassed or threatened by people thinking he's gay.

"I’m convinced the root of unhealthy masculinity is homophobia, and that becomes entrenched in middle and early high school years. Homophobia only ends if straight allies model to young kids, boys in particular, that being called gay isn’t an inherently negative thing and doesn’t require a defensive response. It’s difficult to do, but if we take the homophobia out of schools, we not only improve the lives of LGTBQ+ youth, but all kids who fear being labeled as gay by their peers."

One commenter tried to bring in Bible verses, and Schipper responded beautifully.

A commenter tried to get religious with Schipper, writing, "It would be more inspirational if you taught them 1 Timothy 3-11!" This Bible verse has to do with wives being respected and exercising self-control and faithfulness. Strange comeback, but okay.

Leland had a brilliant response, though, which could also be applicable to anyone who tries to quote Bible verses in defense of discrimination:

"I also don’t inspire them with Timothy 2:9 when they show up with braided hair, and I don’t whip out Leviticus 19:19 when they wear polyester shirts to my class. I don’t believe in cherry picking sins from the Bible and shaming others with them, especially children. Instead my faith inspires me to make sure all kids feel safe and protected in my classroom. Biblically, Romans 2:1, means I do my best not to judge others, and instead love them as Jesus would—no matter what."

Welp, there you go.

Most comments were supportive, and many exemplified why this kind of allyship is needed.

Schipper's post has been shared 31,000 times, and has more than 2,000 comments. More than a few of those commenters shared what this post meant to them personally.

One commenter wrote, "As someone who got bullied a lot in Middle School for what the other kids perceived to be my sexual orientation (I wasn’t out at the time, but turns out they were right) I thank you from the bottom of my heart. You just may be saving some kid from going through the same Hell that I experienced those three long years."

Another wrote, "You, sir, are a scholar and a gentleman. It warms my cold, scarred heart to see an ally that is bold, brave, and bright enough to educate, as well as _educate_, the leaders of tomorrow. Thank you, sir, for helping to foster an environment unlike the one I grew up in, so today's youth might live a life unlike the one I have."

"I got shamed by students and other teachers in school for being “the feminine” gay," wrote another. "So, I thank you for your open discussion and thought provoking process among straight allies."

One commenter said he had gotten his face smashed in when he was young in the 90s because he refused to publicly state whether he was gay or straight. Like Schipper, he was straight, but he was willing to take some heat in order to not satisfy people's prejudices. "Not looking for a pity party," he wrote, "just saying, don't let nostalgia fool any of of you...not one minute of human history is better than this one...and the next one will be better too. Good on you dude. More of this."

Indeed, good on you, Mr. Schipper. More of this, please.