A salesman tried to dupe Twain. His response? A turn-of-the-century burn of the century. 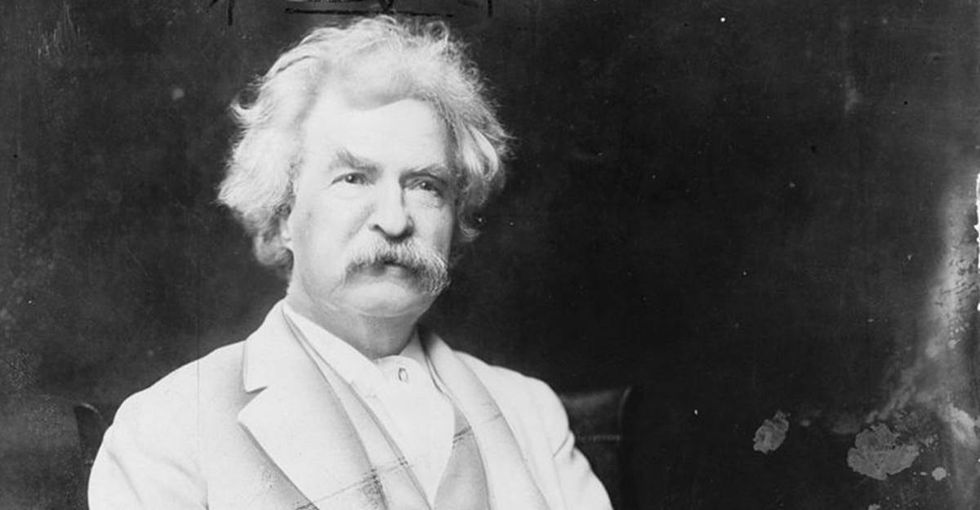 via The Library of Congress/Wikimedia Commons

Prostitution may be the “world’s oldest profession,” but quackery can’t be too far behind.

In the 19th century, American medical doctors began to take a scientific approach to practicing medicine, but it didn’t stop the growing number of con artists pushing fake medical cures, elixirs, tonics, and serums across the countryside.

These traveling sales people would set up tents and make fire-and-brimstone speeches touting the unbelievable benefits of their products that were said to cure everything from tuberculosis to baldness.

These displays were often accompanied by confidence tricks and fake testimonials.

By the time the people who bought the medicine realized it was fake, the con artists were off to the next town with pockets full of their money.

Two hundred years later, people are still duped by quacks who practice unscientific medicine such as homeopathy, reflexology, and aromatherapy.

While the Internet age has given people greater access to information, it has also advanced unscientific heath scares such as the anti-vaxxer movement and big pharma conspiracies.

People who peddle fake medical cures are especially insidious because they convince people to take ineffective courses of treatment that can lead their problems to worsen.

Countless people have died by using alternative medicine to treat terminal illnesses instead of scientifically-proven courses of treatment.

In 1905, five years before his death, author Mark Twain ("The Adventures of Huckleberry Finn," "Tom Sawyer") eloquently railed against practitioners of quackery with a brilliant letter he wrote to a detestable charlatan.

J.H. Todd sent a letter to Twain pitching him on a bogus medicine called “The Elixir of Life” that he claimed could cure meningitis and diphtheria. Meningitis had killed Twain’s daughter in 1896 and diphtheria claimed his 19-month-old son in 1872.

A furious Twain dictated a letter to his secretary that eviscerated Todd with his trademark folksy wit.

Your letter is an insoluble puzzle to me. The handwriting is good and exhibits considerable character, and there are even traces of intelligence in what you say, yet the letter and the accompanying advertisements profess to be the work of the same hand. The person who wrote the advertisements is without doubt the most ignorant person now alive on the planet; also without doubt he is an idiot, an idiot of the 33rd degree, and scion of an ancestral procession of idiots stretching back to the Missing Link.

It puzzles me to make out how the same hand could have constructed your letter and your advertisements. Puzzles fret me, puzzles annoy me, puzzles exasperate me; and always, for a moment, they arouse in me an unkind state of mind toward the person who has puzzled me.

A few moments from now my resentment will have faded and passed and I shall probably even be praying for you; but while there is yet time I hasten to wish that you may take a dose of your own poison by mistake, and enter swiftly into the damnation which you and all other patent medicine assassins have so remorselessly earned and do so richly deserve.

On the big comeback weekend, people flocked to social media to share images and videos of their free treats, including festive Halloween cookies (because who doesn’t love TJ’s holiday themed items?) along with hopeful messages for the future.
Keep ReadingShow less
internet
Health