A mom told her OB she might have postpartum depression. Then they called the cops. 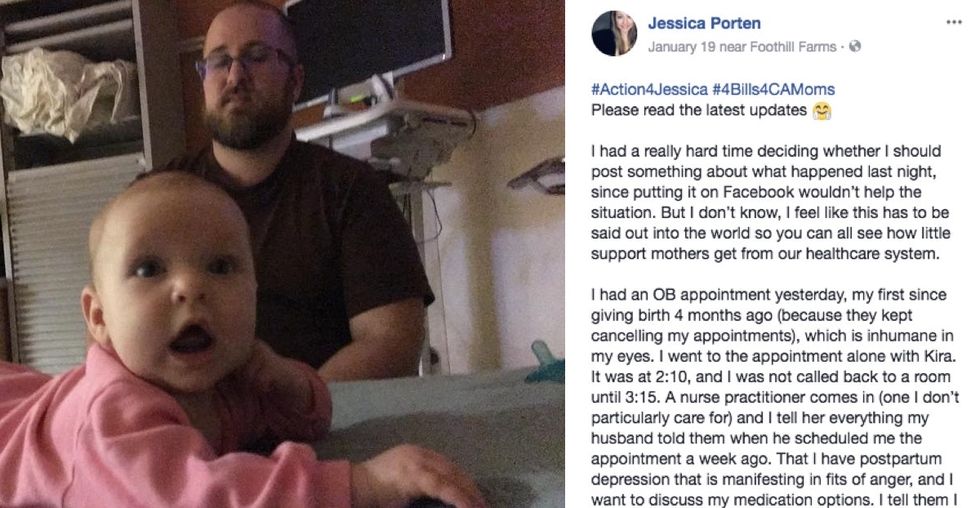 Jessica Porten recently visited her doctor four months after giving birth to her daughter, Kira. She wasn't feeling quite like herself.

She had been dealing with overwhelming sadness and fits of anger, which she knew was likely stemming from a case of postpartum depression.

"I tell them I have a very strong support system at home, so although I would never hurt myself or my baby," she writes. "I’m having violent thoughts and I need medication and therapy to get through this."

In other words, she went to her doctor to ask for help for an extremely normal and treatable issue that affects an estimated 1 million women in the U.S. each year in one form or another.

But instead of getting help, as Porten tells it, the office did something pretty unexpected: They called the police.

Because of her admission to "violent thoughts," staff wanted the police to escort Porten to the ER for evaluation.

The cops, according to Porten, were skeptical of the need for their presence when they arrived and allowed her to drive herself to the hospital.

But the ordeal continued.

"We arrive at the ER and I’m checked in, triaged, blood drawn. I am assigned a security guard to babysit me," she writes.

She says she waited for over an hour to get a room, all while wrangling her months-old baby. After some brief tests, a lot of waiting, and a super-short interview with a social worker, she was deemed mentally fit enough to be discharged.

Porten and her 4-month-old didn't leave the hospital until after midnight.

The worst part? Porten never got the help she asked for.

In addition to the undue stress and wasted time, Porten left the hospital without having received any medical help whatsoever.

"Not once during all of this has a doctor laid eyes on me," she writes. "Not once. Not even before they decided to call the cops on me."

Porten says that, for all her time and effort, she received some papers and pamphlets and was sent on her way.

"I’m still processing all of the emotions that are coming with being treated this way. I’m not exactly sure what to do here. I will say I am deeply hurt and upset, and above all angry and disgusted and disappointed by how this whole thing went down."

She also points out that if she had been a woman of color, her ordeal probably would have been even more drawn out and traumatic.

#Action4Jessica #4Bills4CAMomsPlease read the latest updates 🤗I had a really hard time deciding whether I should post...

Postpartum depression is a serious issue — as is the stigma it carries.

Postpartum depression is common. The condition, and even the scary violent thoughts that sometimes accompany it, may even have an important evolutionary purpose. Some argue that new moms are on high alert for danger and that stress can sometimes visually manifest itself in their thoughts.

Stories like Porten's show exactly why many women would rather suffer in silence than be poked, prodded, and treated inhumanely. And of course, not getting proper treatment will only make things wore.

It's time for a different approach.

It may be a common policy to call the police in the interest of the child's safety. But a policy that better addresses the mother's concerns and gets her the help she needs, without being shamed, is definitely a better way to go.

To get there, we need to help more honest and brave women feel comfortable coming forward about the aspects of postpartum depression that are hard to talk about. And we all need to better educate ourselves on the complexities of mental health issues and, more importantly, the human beings behind them.

A very simple thing happened earlier this week. Dr. Seuss Enterprises—the company that runs the Dr. Seuss estate and holds the legal rights to his works—announced it will no longer publish six Dr. Seuss children's books because they contain depictions of people that are "hurtful and wrong" (their words). The titles that will no longer be published are And to Think That I Saw It on Mulberry Street, If I Ran the Zoo, McElligot's Pool, On Beyond Zebra!, Scrambled Eggs Super! and The Cat's Quizzer.

My article about the announcement (which contains examples of the problematic content that prompted the announcement) led to nearly 3,000 comments on Upworthy's Facebook page. Since many similar comments were made repeatedly, I wanted to address the most common sentiments and questions:

How do we learn from history if we keep erasing it?

When an earthquake and subsequent tsunami caused a nuclear disaster in Fukushima, Japan, in 2011 most people who lived in the area fled. Some left without their pets, who then had to fend for themselves in a radioactive nuclear zone.

Sakae Kato stayed behind to rescue the cats abandoned by his neighbors and has spent the last decade taking care of them. He has converted his home, which is in a contaminated quarantine area, to a shelter for 41 cats, whom he refers to as "kids." He has buried 23 other cats in his garden over the past 10 years.

The government has asked the 57-year-old to evacuate the area many times, but he says he figured he was going to die anyway. "And if I had to die, I decided that I would like to die with these guys," he said.