A man traveled cross-country to interview homeless people. This is what he learned. 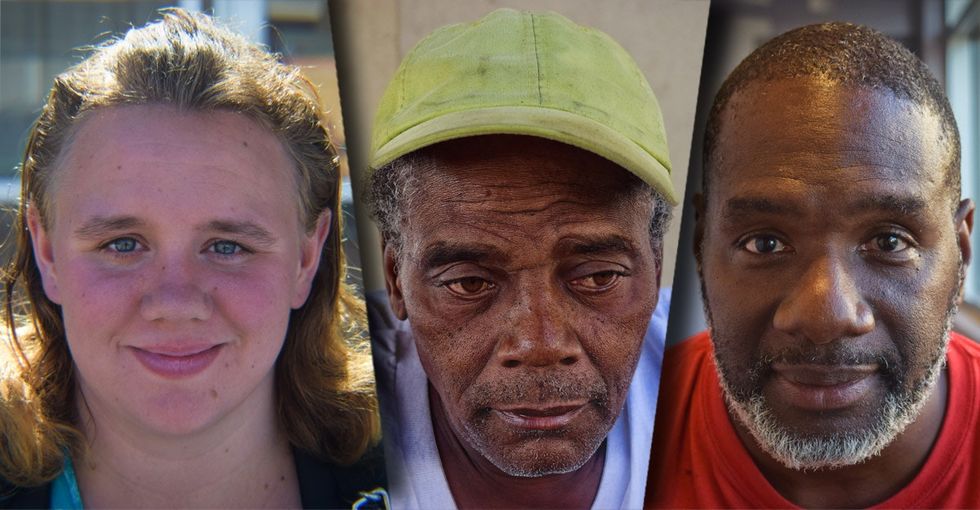 "I’m a very sad man now that she’s gone," Leroy explained. He'd been at his wife's side the moment she died of a heart attack. "I wish I could have saved her."

Leroy, a U.S. veteran, said he'd been doing well staying sober up until that tragedy struck a few months ago. Now he's back on the streets of New Orleans, once again battling alcoholism and homelessness.

"I don’t have anything from her, no pictures, nothing," he said. "[Her] landlord set everything out on the sidewalk and thieves took it all."

Leroy's story is one of many featured by Fifty Sandwiches, a series documenting people experiencing homelessness across the country through stories and photos.

The project was created by Justin Doering, a recent college graduate from Idaho, who raised enough funds on Kickstarter last year to travel solo coast to coast in his van. 34 states and 14,000 miles later, Doering had photographed 78 homeless people and heard their stories.

While traveling, Doering found participants on the streets, in recovery programs, and staying in shelters. He shared meals with them, and in turn, they shared their stories.

Here are five people Doering spoke to during his travels:

1. Stephanie, a 25-year-old living in Texas, who simply wants to be understood.

"I became homeless when I lost my father in 2009 to cancer," she told him. "I was really close with him and that hurt a lot."

"[My dog] is for my Autism. I have high-functioning Autism on the Asperger’s side of the spectrum. It affects your socialization skills, but it affects me mostly emotionally.
***
I wish people would be more understanding to be able to help people like us. All they really say to us is to go get a job. That doesn’t help us. Most job places won’t give us work."

2. Lee, an artist in Venice Beach, California, who speaks out for social justice.

"If we continue to hate each other over skin color, the world will fucking crumble," Lee told Doering. "They say be the change that you want to see. That’s what I’m trying to do."

"People are like ‘I love your hair,’ ‘I love your outfit,' if that’s what you love then what do you really love? When people ask me how I am in the morning, do they really want to know?"

3. Ian from Oregon, who's fighting to get past a turbulent childhood and a family that hadn't accepted him.

"I had a home but I was worried because I was insecure with my own sexuality," Ian said. "I had an idea in my head that there was pressure on me to have a wife and kids. I realized I was homosexual when I was younger but I suppressed a lot of it."

"In my Christian family, I was raised with this idea that I was bad, morally wrong, and that lead me to think I had something seriously wrong with me psychologically. What is so wrong [with] me and why didn’t I think like the rest of my family?"

4. Sheila from Sacramento, who was motivated to turn her life around after living through the devastating death of her dog.

"As we drove to the river and I saw where the smoke was, I already knew," she said. "It was my [homeless] camp. It was my [dog] JJ. Two years of being on the river, and the only days I tie him up there is a fire."

"It had to take my dogs death to realize I didn’t want to be homeless anymore. Cause it could’ve been me.
***
At Saint John’s, I’m six months and eight days clean and sober. It’s a wonderful feeling. It’s an amazing feeling. ... When I move on from here, I’m going to the pound and getting another rescue dog too."

5. Wendell in Atlanta, Georgia, who's learning how to live with a mental illness.

"I have a history of bipolar depression," Wendell explained. "I can’t use that as an excuse [for abusing drugs], I can’t blame anything. ... Bipolar depression is like being down in the pits and there’s no way to get out."

"I had an abusive childhood. I grew up without a father and guys around the neighborhood knew that and took advantage of it. I was beaten up. I was molested. That was just what ‘growing up’ was for me. ... I’ve been clean six months now. I’m taking it one day at a time. I’m back in my own family again, I’m speaking with my kids. That gives me a lot of encouragement."

"Each interview left me in awe of their story," Doering says, a reminder why every individual voice matters.

Having been interested in the issue for years, the 22-year-old thought he understood the complexities of homelessness relatively well. But after speaking to dozens of folks from a wide variety of backgrounds and reasons for ending up without a home, he realized he couldn't possibly "capture a collective face to homelessness" from just one trip across the country.

"Each story was far too distinct from one another to categorize as an entire subset of the culture," he says. And that's the whole point: People experiencing homelessness can't be boxed into a few stereotypes; they're as diverse and deserving of our love and support as anyone else.

He hopes Fifty Sandwiches helps close "the gap between the perception and the reality of homelessness." After all, no one should be defined by their housing situation, and most of the people he talked to didn't start out homeless. "I felt it would be important to share their stories and give a voice to a population whose cries often go unheard," Doering says.

"I ended every single interview asking the question, 'If you could give any advice to the public in their treatment of homeless people, what would it be?'" Doering explains. "The overwhelming response was along the lines of, 'Treat us like we are people.'"

You can read more stories and learn about Fifty Sandwiches on the project's website.