5 years ago, an angry man with a gun killed her son. Here's her message to the NRA. 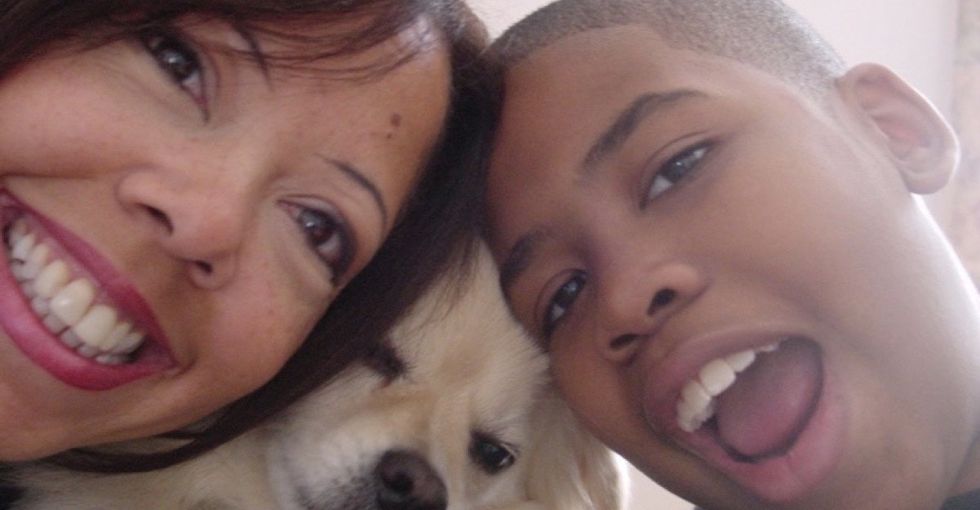 I asked Lucy McBath to tell me about her son, Jordan Davis. She welcomed the opportunity.

Jordan was a really, good kid — thoughtful and kind. Raised mostly by McBath in Atlanta, he made friends easily, and invited them over to his house for home-cooked meals and sleepovers.

Jordan was curious and inquisitive. He enjoyed learning about history, social sciences, and other cultures. As a child, he once spent a year pretending he could speak Japanese.

"He had all kinds of friends. I was very proud of that, that he had that kind of ability to love people. Simply love people for who they were."

Jordan Davis was shot and killed on Friday, Nov. 23, 2012, in Jacksonville, Florida.

It was the day after Thanksgiving. Jordan, 17, was in an SUV with three friends, picking up snacks and cigarettes from a gas station convenience store. Michael David Dunn and his girlfriend were in town for a wedding and pulled into the next parking space. Dunn told the boys to turn down their music. After a shouting match with Jordan, Dunn alleged that Jordan opened the door of the SUV and pointed a shotgun in his direction. Dunn took a handgun out of his glove box and started shooting into the SUV.

Tommie, the driver and Jordan's friend, floored the SUV backward, fleeing the gunfire. Dunn opened his door one more time to get a few more shots off. He later told police he feared for his life, though police never found a shotgun in or around the SUV, and witnesses never saw one.

In the aftermath, Dunn sped away to his hotel. The boys pulled into a nearby shopping center to assess the damage. Three of them were physically unscathed but covered in blood. Jordan was hit three times. He gasped for air and died shortly after. Dunn and his girlfriend didn't call the police. In fact, they made drinks and ordered a pizza.

McBath was in Chicago with her family for Thanksgiving while Jordan had stayed with his father in Jacksonville. The night of the shooting, McBath felt compelled to slip away from the table and go to the bedroom.

"I had no reason to go to the bedroom," she says. "When I got up there, I saw Jordan's father's face on the phone as the phone was lighting up, and that was the first phone call that I got."

At that moment, a cruel, indelible line etched itself on her life — before Jordan's death and after.

During his trial, Dunn cited the language of Florida's "Stand Your Ground" law.

Florida and 23 other states allow individuals to use deadly force to defend or protect themselves against real or perceived threats. Stand Your Ground laws made the headlines in 2012 when another Florida man, George Zimmerman, "stood his ground" against Trayvon Martin, a 17-year old kid holding an iced tea and Skittles. Zimmerman shot and killed Trayvon and, after a well-publicized trial, walked away a free man.

George Zimmerman leaves the courtroom a free man after being found not guilty. Photo by Joe Burbank-Pool/Getty Images. ‌

Dunn, however, was convicted of attempted murder for shooting at the other boys in the car. After a mistrial and retrial, nearly two years after the shooting, Dunn was convicted of the murder of Jordan Davis. He will spend the rest of his life behind bars.

"We are very grateful that justice has been served, justice not only for Jordan, but justice for Trayvon (Martin) and justice for all the nameless, faceless children and people that will never have a voice," McBath told the press after Dunn's retrial.

Just months after the shooting, McBath was asked to speak about "Stand Your Ground" legislation in Georgia. One opportunity led to another, and before long, she was approached by the gun violence prevention advocacy group, Moms Demand Action for Gun Sense in America to become their volunteer national spokesperson.

Moms Demand Action was formed by a stay-at-home mom one day after the massacre at Sandy Hook Elementary School. The group now has more than 60,000 volunteers in all 50 states and 4 million supporters working to  advance real policy changes at the municipal, state, and national levels.

"We are the largest nonpartisan gun violence prevention organization in the country," McBath says. "We have helped pass background checks on all gun sales in seven states. We have passed laws in 24 states to prevent domestic abusers from getting guns."

McBath is now on staff for Moms Demand Action, working to engage people of color, faith communities, and other traditionally underrepresented groups in the gun violence prevention conversation. The fight is hard, but each victory feels good and keeps her close to her son.


But as many victories McBath has had as a gun violence prevention advocate, there's still one outstanding: speaking directly to NRA leadership.

While the opportunity to speak with the lobby's executives hasn't presented itself, McBath knows just what she'll say. It's clearly written on her heart and pours out of her effortlessly, filled with fire and vigor.  (Emphasis added.)

Her words ring out like a rallying cry. It doesn't matter who you are or what you do, gun violence is infecting our communities. And it must stop.

Lucy McBath can't bring her son back. But sharing his story and fighting for common sense reforms could save someone else's.

And through her advocacy work, Jordan's legacy lives on in safer schools, communities, and public spaces. His is a light that will never go out.