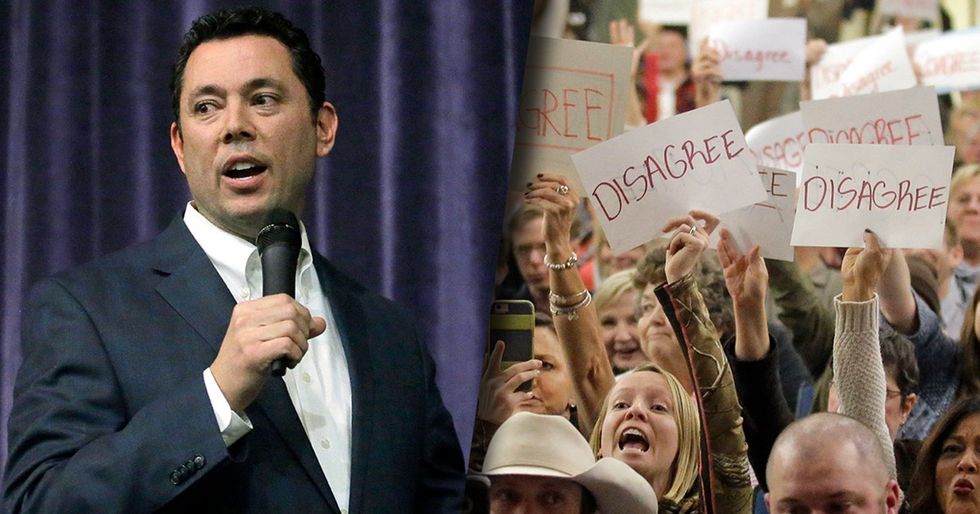 The Republican chairman of the House Oversight Committee hosted a town hall back home in suburban Salt Lake City.

The high school auditorium where the event was held was packed with roughly 1,000 constituents, with hundreds more huddled outside the space.

Most of them were not happy.

Since the election, Chaffetz has been treading on thin ice.

Last year, as chairman of the committee, Chaffetz — a leading critic of Hillary Clinton's role in the attacks in Benghazi, Libya — talked tough about keeping the former secretary of state in check should she win the presidency. After Donald Trump's victory, however, Chaffetz has been far less critical of the president, shrugging off the former reality TV star's myriad of potential ethics violations. Chaffetz has also been highly critical of the Affordable Care Act and has voted for its repeal — a move that's unpopular with most Americans.

These were the facts at the front of voters' minds when things came to a boil Thursday night outside Salt Lake City.

1. When constituents — many of whom were attending a town hall for the first time — chanted "Do your job!" in regard to Chaffetz turning a blind eye rather than investigating Trump's ethics issues.

2. When a cancer survivor who has utilized Planned Parenthood's services asked Chaffetz, "Why are you trying to take it away?"

“I was actually able to keep receiving those vital yearly screenings [after having battled cancer] because of my town’s Planned Parenthood,” the survivor said to raucous applause, noting she hadn’t had private health insurance at the time. "So, sir, can you please tell me — explain to me why you are trying to take that vital health provider away from women like me?"

3. When boos filled the auditorium after Chaffetz told the crowd it's "not required by law" for Trump to release his tax returns.

Trump's tax returns would paint a much better picture of the president's philanthropic efforts and business partnerships, revealing if his brand's global reach has any conflicting relationships with problematic people or foreign governments, like Russia.

While Chaffetz said he wishes Trump would release his tax returns, it's not required by law for the president to do so. He tried to carry on, but his words were immediately drowned out by the disapproving crowd.

4. When this retired school teacher used her classroom experience with troublemakers to make an excellent point about Trump's behavior.

“I rarely had a discipline problem because I laid out my expectations very clearly, and I laid out the consequences. But once in a while at the beginning of the year, after just two or three weeks, I could look at the kid and think, ‘you’re gonna be a problem.’ ... It’s been two or three weeks“ since Trump took office, she said to loud cheers.

"I would draw a line at the very beginning of the year and say, 'Pass this line, and this is the consequences.' When you’re president of the United States, the consequence is impeachment," she said before addressing Chaffetz, pointedly asking: "What is your line in the sand?"

5. When constituents who couldn't get in protested outside, chanting, "We'll be back!" for Chaffetz's next visit to town.

#Chaffetz town hall post-game: Protesters who couldn't get in are still outside chanting "we'll be back!" and "inve… https://t.co/GsLxHeBTIN
— Eric Bradner (@Eric Bradner)1486697456.0

What happened at Chaffetz's town hall, although particularly contentious, was not all that unexpected.

The same night of Chaffetz's event, Rep. Diane Black faced similar heated questions in Tennessee, with one Obamacare user pleading, "I have to have coverage to make sure I don't die." Rep. Tom McClintock of California was forced to rely on police to make his way through a crowd of passionate demonstrators at a town-hall event earlier this month. In Pinellas County, Florida, an angry constituent told Rep. Gus Bilirakis to "grow a spine!" and defend health care. And all of this, of course, comes amid nationwide protests of President Trump's travel ban targeting Muslims — another unpopular measure to most Americans.

Frustrations have mostly been directed toward Republican lawmakers, and rowdy town halls like this are largely happening in deep-red America — a direct rebuke to the myth that the backlash to Trump's policies is coming solely from "coastal elite" cities and states.

Regardless of political party, most Americans agree that revoking life-saving health care coverage from millions of people is inexcusable. Most Americans care about Trump's potential conflicts of interests as president. And clearly, most Americans couldn't care less if their representative is Team Blue or Team Red — they want a government that works for them.

If you're interested in attending a town hall hosting your representative, here are some tips for first-timers you might find helpful.