This ‘powerful’ dad wants to protect his queer son. And the story went viral. 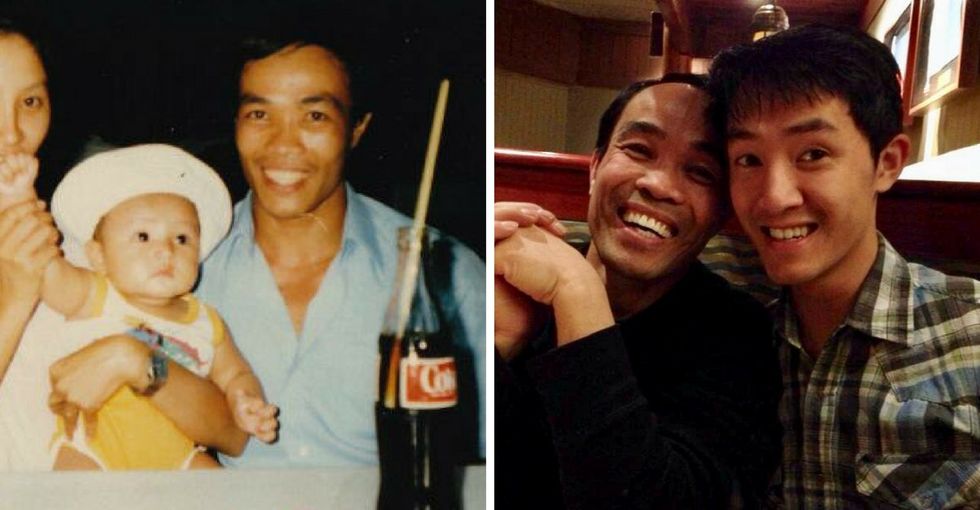 Trung Le Nguyen and his smiley dad are one photogenic pair hailing from Minnesota.

But as happy as they are, Nguyen's father is a worry wart, just like many parents.

He's probably a bit more on the extreme side compared to other moms and dads, though. When you learn their family story, it makes a lot of sense.

In a tweet that's now been shared and liked thousands of times, the 27-year-old published screengrabs from a Facebook post he made in 2012. And in the old post, Nguyen gives some backstory on his relationship with his dad, and why it is the way it is.

As Nguyen explains in the old post, his mom and dad emigrated from Vietnam in the early '90s.

Nguyen was born in a refugee camp in the Philippines before his family came to the U.S. in 1992. Speaking little English and starting from scratch in a totally new culture, the young couple had to find a way to make ends meet in their new home of Minnesota.

But after the family had settled in to their new American home and began feeling more comfortable, a teenaged Nguyen delivered some news that ... complicated things.

Nguyen came out to his parents as queer.

“They reacted with a lot of fear," Nguyen wrote. "I initially misinterpreted that fear as homophobia — that they didn’t understand or were afraid of my sexual orientation. As it turns out, they were just reacting out of fear for my life."

As immigrants, Nguyen's parents faced prejudice and racism living in their mostly white Midwest community, according to Nguyen. They wanted their two sons to know the language and culture well because, "perhaps then," Nguyen wrote, "[he and his brother's] identities would not be so politicized and we could go about our lives in peace."

"My coming out was met with an exasperation — a sudden resurfacing of a fear that they thought to be long-buried," he wrote.

"Just when they thought their boys could be free to navigate the American cultural landscape as full-fledged, respected citizens, another identity pops up that would relegate their oldest son to second-class status in the eyes of a lot of people.”

“When we were little, they were worried that either of their sons could be the next Vincent Chin," Nguyen wrote, referencing the Chinese-American man who was brutally murdered in Detroit in 1982 because of his ethnicity. "Just when that fear subsided, it was replaced with a fear that I could be another Matthew Shepard."

So, Nguyen's dad started having "chats" with his openly queer son.

When Nguyen was younger, the chats came off as condescending. But the older he got, the more he appreciated why his dad felt so moved to remind him how careful to be in the outside world.

"My dad is a powerful man — a master kick boxer and tournament champion several times over in his youth," Nguyen wrote. "He’s accustomed to taking on the world as a fighter, and he has the scars and the physique to prove it. But when he talks to me before every time I leave the house, he looks so feeble."

"He’s not lecturing me," Nguyen wrote. "He’s imploring me. He is begging me to do everything that I can to come home safe because he knows he’s completely powerless to protect me like he used to."

Most parents worry. But it's different when your kid lives in a world that doesn't fully accept them for who they are. It's different when their skin color, or their sexuality, or their religious faith — or any other thing that makes them different — plays a role in how the world sees and treats them. And when a parent has the scars from being different as well, the worry rears its head a bit stronger, too.

The day Nguyen posted his story to Facebook in 2012, his father had yet another chat with him.

"My dad has no idea it’s [LGBTQ] Pride weekend," Nguyen concluded, "but this morning began with some sagely advice over coffee: Do what you love, and love who you love. I’m proud of you already." ❤️